2009 is almost over. For me it's been a year of happiness and sadness; of Yin and yang; of pleasure and pain; of fast and slow. In short, the year has been just like running.

December 16 was the saddest day. After returning from a run with the Wednesday group I received a phone call from my sister Jane. Dad had passed away — he finally succumbed to complications following heart valve surgery. His passing came as something of a shock, as he had seemed to be rallying after many weeks of intensive care. He was 84.

I ran my first marathon with Dad back in '81. It was also his first. We completed our weekend long runs together on quiet roads through the flat farmlands south-east of Wagga. On other days Dad would sometimes accompany me on his Malvern Star 10-speed and urge me to run at 14 or 15 kilometres per hour. I think he was impressed with such running speeds because at age 55 they were beyond him. They are now beyond me! In the marathon I ran 3:41, and Dad 4:38. Both our marathon careers soon stalled, although not before Dad had improved his PB to (I think) 4:10. He took up competitive kayaking while continuing with sailing and 'fun running'. He completed many City-to-Surfs during the 1980s and early '90s. I gave away marathoning in a quest to improve at shorter races.

The funeral was on December 22 near Chinderah in northern NSW. I arrived on a flight from Sydney and Jane from Tasmania via Melbourne. My brother rented a holiday unit near Coolangatta beach for a few days. It was great to spend time with him, Catriona and the kids — Nathan and Claire, now teenagers — how fast they've grown! Also, a rare meeting with some of the cousins — Mike, Col, Jan, Wendy (Granny Lulu), Rob, and Rob's wife Sherry. We don't see them very often, so enjoyed their company in spite of the circumstances.

Anyway friends, back to running — which I guess this blog should be about. In terms of Yin and yang, the year was a failure — although not as disastrous as the year experienced by Julie. I wanted to run 11:39 for 3000 metres, but could only manage 12:26. Are times that important? Yes. And no. Enjoying racing and training is important to me, and I had fun with both. It was also my good fortune to meet some new friends, while trying to keep up with the old ones — they all run so fast! Here's to more of the same in 2010, and here's to you too — may you enjoy a year of happy and successful running. 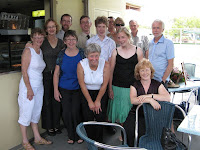 Oh Ewen, I'm so sorry to hear it. What sweet memories you have, it's beautiful that you were able to run together, that's such a gift. The photo is great, what nice people you all are, you can just tell. May your 2010 give you everything 2009 was stingy on, like an 11:39 3k. Hugs to you.

Ewen,
Sounds like you had some fantastic times together and a very special bond!
Hang on to your memories and he will always be with you.

All the best for the new year

P.s. I lost my own dad when I was just 4 years old, so in my mind you seem like a very lucky guy, not really sure anything anyone can say will help your lose, your grief but the pain does ease with each month, each passing year but your memories will stay strong and his spirit will stay with you!

Ewen, I am sorry to hear of your loss. I think you may recall I went through it early in 2008. It is an awful thing, but a thing we knew we could never escape as men. It is truly fantastic that you shared your running with your dad. I couldn't, but I live in hope that I can share it with my sons. And your dad lived out his days in Chinderah! That's amazing. The back yard of where I grew up. I guess all I can say to that is I know he was definitely in a good place! Cheers mate, may 2010 be a year of good stuff!
Steve

Ewen, very sad news but you were lucky to have had such a good relationship, including running marathons with him. Best of luck in making 2010 a banner year!

Ewen - that was a very moving post. You write so well. You have some wonderful memories of your dad which will always remain with you for a lifetime. You obviously shared some very special times. I didn't realise you ran your first marathons together - wow! Here's to 2010 - let's hope it will be amazing! Incidentally, I still owe you that other hug!

Ewen,sorry for my bad english and have good memories of your dad.
You run whit him and thats great!.
In dutch:
Ewen, sterkte in deze moeilijke periode en het verlies van je vader is erg moeilijk.
Maar zoals je al schreef op mijn blog "have fun when you run"!.
Have a fun running 2010.
Rinus.

So sorry to hear about the loss of your dad Ewen. Very sad. It's lovely though that the two of you shared so much over the years, including running. Cherish that.

May running in 2010 bring you joy and success. Bring it on!

It's interesting that you started this post stating the dichotomies of life.

You seem to understand that there is not one without the other. It's sad that we must suffer over the death of those we love but think of the alternative it is simply not loving at all, and that is far worse. Still it is never easy losing ones parents, my sympathies.

All the best for the following year Ewen. Keep up the good work!

very sorry to hear about your dad ewen. hugs . But it is nice that you have such fond memories to carry with you. As to the running do times matter? that depends on the type of person you are. For me it is a yes-but thats cos its what motivates me to train. Does it matter if you dont get your goal time-for me the answer is it depends....did i do eveything i could to try to achieve it, and if i have tried hard then you put it in the, i tried, i didnt, now itll have to be next year basket. speaking of which- our virtual 1500m race is still on i assume! and i will try to get out and do a 3km, although 12.26 is beyond me

Wow. Losing your dad is so difficult. So sad too. Mortality does suck.
What great memories you shared. You can keep those close to your heart for sure.
Yes 2009 had some pretty big ups and pretty big downs for me too. May you be comforted and be lifted up in 2010.

Ewen, my sincerest sympathy to you and your family for the passing of your Dad. Losses such as these never come at a good time. Take strength from your memories.

I am sorry to hear about your Dad Ewen. Training with your ad must have been a great experience.

Hello Ewen. So sorry to hear of your loss, yet inspiring for me to hear your wonderful memories of running with your dad. I hope my children have similar memories of me when I am gone. He has left a great legacy with you which we get to read about here. All the best for 2010. Best regards, Paul

I'm so sorry to hear those news, Ewen. Keep in mind that at 84 your Dad had a great innings.

Sorry to hear about your Dad Ewen. My thoughts are wth you and your family.

Ewan, I'm so sorry to hear this. To be honest I have been afraid to click on the blog link because I was afraid this is what the "Dad" post would be.

He sounds like an amazing man. The impact and influence he had on your life and athletic pursuits is heartwarming. What a neat guy.

Funerals are always so hard but it is also always a family reunion and that's a good thing- sounds like it was a nice time with them. You're blessed to have such a close family.

Happy New Year Ewen. It's out with the old, in with the new! New goals, new challenges, new adventures. :)

So sorry to hear about your Dad Ewen. Hope to see you running better and faster in 2010. Should see you at SMH Half I hope.

Sorry to hear about your Dad Ewen. My condolences.

Very sorry to hear about your Dad Ewen.

Ewen, I am very sorry to hear the news about your Dad. I am sure you will cherish the memories.

Best wishes for 2010. You have achieved a wonderful blend of the sheer enjoyment of running and sharing that enjoyment, while also maintaining your focus on goals. Hold onto both the joy and the goals.

Sorry for your loss, Ewen.

I am glad to have found your blog in 2009 and look forward to reading about your 2010 running adventures.

Oh Ewen, I'm so sorry. I can't even fathom such a loss and my heart goes out to you. How wonderful you got to experience the joy of running with your father.

Your running and writing are such a huge inspiration to me, and I look forward to 2010 with you.

I am sorry to hear the news of your fathers passing, I an only imagine how hard that would be. Like someone said above it sounds as though you had a great relationship with your dad and shared many great times with something you both seemed to enjoy running

Hi Ewen, Very sorry to hear about your Dad. My thoughts are with you and your family.

I'm truly sorry to read about your Dad's passing. My Dad died in February 2009. While he never ran a marathon, he was at each and every significant race starting 30 years ago in high school. I understand the bond you and your father shared.
Blair

So sorry to hear about your dad. Very sad. Cherish all your wonderful memories.

Thanks all for your thoughtful and caring comments. I'm touched. Although far away, I feel like you're all good friends.

Sorry to hear that Ewen. But it is wonderful to have been able to race and train with your Dad. I never did that with my Dad (still going at 86) but he was inspired enough after seeing me and my wife run the GC Marathon in 1984 to take up running at age 60 and he went on to run many marathons till hid mid 70s.