I've just woken from a nap, after running the Cotter 18-mile. It was a spectacular morning. The sky was bluer than blue. At the top of Yellow Rabbit Road, the air had such clarity that the distant silhouette of Black Mountain Tower was etched sharply on the skyline.

Running with friends makes such mornings special. It was a select group – Steve (who happily jogs at whatever speed is going), CJ (who runs up hills like they're smooth concrete footpaths), Strewth (who waits patiently until a lazy wombat catches up), Chris (who makes sure nobody gets lost) and Jill (who never complains when we say "the hills are over, now it's flat").

I also had a friend who selflessly volunteered to pace me on Thursday night. This was the last track night of the season, the main event being the ACT Veteran's 5000 metre Championships. It was also my last track race as an M45. Next season I'll be joining the ranks of the really crusty and ancient M50s!

I was very keen to run faster than the 'Free Beer 5000', and set a goal of sub-22 minutes. Katie, a member of the Speedygeese, offered to pace me at laps of 1:45. She did a beautiful job – I didn't know she was capable of such precision. The 3000m split was 13:02.4, five seconds ahead of schedule. I slowed slightly in the fourth kilometre, but just concentrated on sticking with Katie. I managed to raise a modest sprint in the last lap to finish in 21:45.27, a season's best. Very happy with that! It had been a great night to end the season – thanks Katie, and thanks Geoff for encouraging the Speedygeese!

There was another runner who had a good race on Thursday night. I run with her on the grass track at Calwell – well, I do the warm-ups and warm-downs with her! Kathy is really old. She's been a W50 for ages. On Thursday, she demolished the ACT W50 record (held by none other than Rosemary Longstaff), by 1 minute 27 seconds, running 18:27.97. This was also 12 seconds under her ACT W45 record, and according to Robert Song's calculator, is equivalent to 16:02 for a 30-year-old. Well done Kathy!
Posted by Ewen at 4:37 pm 25 comments:

Farewell to the Mountains and Valleys 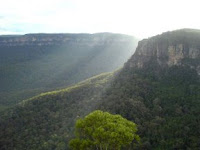 After Six Foot I took six days off running – there's something nice and symmetrical about that. The quads were sore until last Thursday. On Saturday I ran with the group from Molonglo – just a 'lap' of Mount Ainslie – 16.3km. Strewth made us run up the hills. How mean! She was also first back to the cars, and ran a further 18k around the lake! Steve seemed fairly happy to have run his fastest Six Foot for 3 years (4:50:00), and was looking forward to the Glasshouse 80k in May.

It's with some sadness that I bid farewell to the mountains and valleys. My next big thing will be May's SMH Half Marathon, in the city and alleys. I'll decide on a goal time closer to the event, but under 100 minutes would be a good step towards my stated Gold Coast goal of 95:29. Both these times seem bloody fast right now. Speaking of half marathons, there's a great video from Flotrack of Ryan Hall running 59:43 in the Houston Half. That's fast!

When I'm out doing the long runs for Sydney, I'll recite in my mind the words from Henry Kendall's poem, thus reminding myself of the uplifting challenge enticing me back to the mountains next year...
By the channels of coolness the echoes are calling,
And down the dim gorges I hear the creek falling;
It lives in the mountain where moss and the sedges
Touch with their beauty the banks and the ledges.
Through breaks of the cedar and sycamore bowers
Struggles the light that is love to the flowers;
And, softer than slumber, and sweeter than singing,
The notes of the bell-birds are running and ringing. 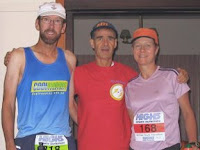 Sipping on a hard earned cold Crown Lager at Jenolan Caves, the thought of blaming 2P for my current state of exhaustion briefly crossed my mind. His enthusiasm for this race is contagious – he often says he only runs to support his Six Foot habit. Being a rather curious wombat, I'm susceptible to catching the odd bug that's floating around the farmyard. I think I've caught Six Foot Fever.

My race went quite well for a very long time. Five hours is a very long time. Somewhere out on the Black Range I had a vision of Forrest Gump when he stopped running in Monument Valley, Utah and said: "I'm pretty tired... I think I'll go home now". To make it home, I still had to negotiate the Deviation, followed by the single track to the Binda Cabins.

Once past the cabins, my limited mathematical ability permitted me to calculate a possible sub-6:30 finish time... if I started running. I managed to do this, and surprisingly, didn't feel too bad. On the final downhill, a pale-faced Don Juan said my calves were looking good, so I took off and passed a dozen or so runners before the finish. 45 kilometres in 6 hours, 24 minutes and 55 seconds for 618th place! So, a comfortable finisher's medal, but the sub-6 hour goal survives for 2008.

One of the other highlights of Six Foot is meeting so many CoolRunners. I enjoyed long chats with Kevin Tiller, Fryer, CJ, IDW and Plu at the Edge Theatre. Then, on race day, there were far too many names for a poor wombat brain to remember... Horrie, Gnomey, Tiger Angel, Cirque, Kit, Owly, Don Juan, Wildthing, ORunner and Jen_runs. Thanks Jen for an enjoyable walk down Nellies! After the finish, so many more... R2B (great debut Adrian), Go Girl (next year), 2P (the best beer I've ever tasted mate), CJ (you looked too fresh), Spud, Lulu, Tim, Will, Colin, Awiseman and Superflake (bring on Canberra). Then, of course, a few of the members of my 2nd-placed team – "KoolACTrunners (Gramp's Army)"... Trev (legend), Velcro, Aunty, Stu, Scotty, DaveO, Hugh, Mario, Nick, Carol, Steve, Mike, John and Anita.

This was my 100th post. I made it to the other side of the river. I didn't fall, or do anything foolish (although I had two classic 'mid-air running' stumbles). My silly human pride survives intact. Bring on the 8th of March, 2008!

Providing I don't "do a CJ" or "do a Tuggeranong Don" between now and March 10, this will be my last post before the Six Foot Track.

David Kilby played a song on the radio this afternoon. Some of the lyrics describe my state of mind a week out from what promises to be an exciting, arduous and very long day... "Stand tall, don't you fall - For God's sake don't go and do something foolish - All you're feeling right now is silly human pride".

This is not the original artist, but I think it suits my purpose better. 'Steve' used to be a half decent runner, just like a mate of mine. He mightn't have a recording contract, but he's out there doing something he loves. [If you have a slower connection, let it play, then click 'watch again' to hear Steve in all his glory] *

In a comment on my last post one of the Queensland contingent asked if I was going to do a 30+km run the Saturday before Six Foot. I was tempted to reply with "Folks are dumb where Clairie comes from", but I won't, as I don't want to be on the receiving end of a punch in the guts. My final long run was last Saturday (24 February), a successful 3 hours 37 minutes for 34.3 kilometres.

Tesso wondered if I'd fired up the Cow-culator yet to work out my race pace. The kids at Calwell are often told that a race will be 'successful' if it's executed well, or run according to plan. If this is done, the finishing time, or PB, will take care of itself.

My plan is to start near the back and run as easily as possible to the Cox's River in 1 hour 55 minutes (7:25/km pace). I want to arrive at the summit of the last big hill, the Pluviometer in 3 hours 51 minutes (11:00/km for 10.5k of hills). After that, I'm at the mercy of the course. If I'm able to run at more than a cow-amble along the Black Range, a time of around 6 hours is possible. If not, I'll be hanging out for Plu and the sub-7 hour finisher's medal.

Thanks everyone for your encouragement! See you on the other side of the river. :-)

* Sadly, the original youtube video has disappeared, so I've replaced it with a 2011 performance from Burton.
Posted by Ewen at 5:57 pm 37 comments: