I need to stay calm. Objective. I've just finished two solid weeks of Lydiard-style training. The week finishing today totalled 101 kilometres. That's on top of 96 kilometres the previous week. Is training slower making me faster? It's too early to say.

Since the Gold Coast Half, I've been restraining myself in races, running them as 'upper aerobic' sessions in order to keep lactate out of the muscles. Lactic acid is supposedly an evil potion, to be avoided at all costs during base training. At times on my dilly-dallying runs, I wonder if I'm destined to become the slowest 100 kilometre-per-week runner in Australia. Just like Thomas – the self-proclaimed slowest 100 mile-per-week runner in the world.

At this stage, I intend to race hard in the Canberra Times 10k Fun Run on September 16. What happens on that day will be interesting. Before then I should do one of John Hadd's famous 2,400 metre sessions to test my current fitness.

Thus far, Hadd training has been quite enjoyable. Most of my running would be described by Steve as 'lower aerobic'. Heart-rates have been mainly between 125 and 136. For me, this is 75 to 82% of my 166 maximum. It produces rather gentle speeds of around 6:15, down to 5:33 per kilometre. I really should do more running at HRs of 120 (72%) or lower, but this is easier said than done. It means dawdling along at warm-up pace – about 6:35 per kilometre (10:36 miles). At that speed I could be mistaken for one of those living statues and be daubed in graffiti.

Running slowly is interesting. It takes a long time to get anywhere. This week I ran for 10 hours and 30 minutes to cover 101 kilometres. I think this is good value. If I were faster I'd have to run 140-plus kilometres in order to be moving for that length of time. Slow has advantages. I hope I don't get too fast. I might have to run further. Down to Michelago maybe. My shoes will wear out. I could get lost.
Posted by Ewen at 1:12 pm 20 comments:

In training for running, I'm prone to try different things. Just to see what happens. In July 2005, I tried running to and from school – like Eliud Kipchoge. It was a short experiment. Sometimes, at the end of a hard working day, I was too buggered to run home again. I didn't enjoy sleeping at school.

In December last year I wrote about running faster by improving my speed over 200 metres. My short speed was improving, but with the end of the track season, and snowy winds blowing in from the south, I've become fascinated once again by Arthur Lydiard. Running fast 150s and 200s on the icy grass at Calwell isn't much fun in the depth of a Canberra winter.

The training ideas of Nic Bideau have also intrigued me since reading his article in Modern Athlete and Coach. I mean, Craig Mottram is running pretty well these days, isn't he? For crying out loud – 8:03.50 for 2 miles! Mottram runs a Lydiard-like 170 to 180 kilometres per week, more or less year-round, using five different types of running sessions. His recovery runs are extremely easy (white), with other sessions being hard (black).

Just recently I came across a blog article by Steve Magness (4:01 for the mile in high school) called 'Catering to the Individual'. He talks about how a training system needs to suit an athlete's individual physiology. One part of individual physiology is the way fast, intermediate and slow twitch muscle fibres react to different training stimulus. This explains in part, how two athletes, such as Ralph Doubell and Peter Snell, can win Olympic Gold in the same event (800 metres), using two contrasting training systems. Doubell, coached by Franz Stampfl ran intervals every day of the week, while Snell, coached by Arthur Lydiard, used base training (100 miles per week) followed by hills, anaerobic training, then tapering.

I'm fascinated by Lydiard, after reading once again, the document authored by mysterious coach John Hadd. He explains how to build a Lydiard-style base with controlled running at various low heart-rate percentages ranging from 72% to 83% of maximum. These heart-rates are purported to maximise mitochondrial adaptation in slow twitch muscle fibres as well as improving capillary density, resulting in an improved lactate threshold. This is very easy paced running. His famous pupil Joe, after 19 weeks of such training (nothing anaerobic), ran a half marathon in 71:43. Closer to home, another Hadd pupil, Robert Song, recently ran 3:18:26 in the Gold Coast Marathon - his fastest time since turning fifty.

I don't have any current plans to run marathons, but I think this type of running could suit my physiology, and wombat-like gleefulness to run slow and long – especially during a bone-chilling Canberra winter. I've been doing it since early June. In due course, I'll find out, and let you know.
Posted by Ewen at 10:13 am 25 comments: 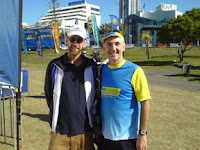 Yes, I did manage to drag myself out of bed at 5.00am on Sunday to run in the 29th Gold Coast Half Marathon. It's not easy to summarise such a big weekend in a few paragraphs. My mood was a little subdued after hearing from Norma on Friday that her flight out of Sydney had been cancelled and she'd decided to return to Mittagong.

On Sunday morning I walked from Main Beach to the start with Chris from Calwell who was hoping to run 75 minutes (he had a bad patch in the middle of the race and eventually ran 77:08 to place 55th). I made a bit of a tactical blunder by not lining up until 10 minutes before the start. The best I could do was to squeeze in close to the 2 hour pacer, near Ellie and Uncle Dave, well behind the green balloons which indicated the 1 hour 40 minute group.

Needless to say, the start was a bit frustrating. It was a 3 minute walk until we reached the timing mats. Thank goodness for chip times! After that, forward progress required quite a bit of dodging and occasional taking to the footpath in order to get a clear run. The green balloons had totally disappeared, so I worked on gradually catching the red balloons of the 1 hour 50 minute pacers. I managed this at 7k, then moved ahead.

The rest of the race went surprisingly well. I tried to maintain a heart-rate of around 150, which early on equated to kilometres in the mid-4:50s. These slipped out to 5:00 and slower in the second half. From 16k to the finish I was still feeling calm but there was nothing I could do about my slowing pace. I tried to keep a few people in sight – triathlete man, green jumper girl (running with a jumper tied around her waist) and Japanese neat long pants lady. 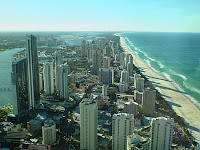 With about 500 metres to run, the famous CR Cheer Squad came into view. What a lift. Thanks Coolrunners – you were brilliant! Around the corner and down the long finish chute I raced, seeing the clock tick over to 1:48:10, which resulted in a chip time of 1:45:11! I think I'll take the latter for my 50+ PB. I was very pleased to finish feeling happy and well, four minutes quicker than the SMH Half and with an average km rate of 4:59.1!