Smackdown in the Sun

I thought I'd write about two things that pretty much sum up where my head is at the moment. I'm totally excited about trying to improve at 5k. I raced the Canada Day 5k last Sunday. It's an annual fund-raising fun run (for the ACT Cancer Council), and happily for me, only the times of the first 25 men and women in the 5 and 10k races are recorded. I timed myself at 23:31 — a small improvement on my CRRF race. Started fast (4:16 first k) and died an ugly death in the hills with 5:16 for the fourth kilometre.

I'm reading a novel. My generous Minnesotan sister Anne gave it to me. It's Once a Runner, by John L. Parker Jr. I've just read chapter 17 — Breaking Down — in which the protagonist Quenton Cassidy is left in a broken state by seriously difficult training.

"The toll on the runner — and those around him — was high, psychologically as well as physically. He became weak, depressed; he needed twelve to fourteen hours of sleep a night. He was literally desperate for rest, spent his waking hours with his legs elevated, in a state of general irritability. He became asexual, rendered, in the words of the immortal limerick, really quite useless on dates. He was a thoroughly unpleasant person."

Now quickly I must say, I hope that doesn't apply to me. I do however, regard myself as a serious runner. I hate offering (and generally never do) excuses for a poor performance. Later in the same chapter, the inevitability of training that serious runners do is talked about:

"Quenton Cassidy knew what the mystic-runners, the joggers, the runner-poets, the Zen runners, and others of their ilk were talking about. But he also knew that their euphoric selves were generally nowhere to be seen on dark, rainy mornings. They primarily wanted to talk it, not do it. Cassidy very early on understood that a true runner ran even when he didn't feel like it, and raced when he was supposed to, without excuses and with nothing held back. He ran to win, would die in the process if necessary, and was unimpressed by those who disavowed such a base motivation. You are not allowed to renounce that which you never possessed, he thought."

The other thing I'm thinking about is how, as an older runner, to run faster. There was a link on Flo's blog to a July/August 2010 Running Times article about running form. It's a great read. In it there's talk about running economy, and how the body becomes economical (with energy use) after doing many years of running. Pete Magill says "This belief system that just doing it over and over is somehow going to make us better is really crazy. Long-time runners actually suffer from the body's ability to become efficient. You become so efficient that you start recruiting fewer muscle fibres to do the same exercise, and as you begin using less muscle fibres you start to get a little bit weaker." This is where I am right now.

Next Saturday morning I have a 10k race at the Gold Coast. I challenged Robert Song to a race in the Half Marathon, but have decided to race the 10k. So now I have a showdown with Jojo — the Smackdown in the Sun. She's an 800m runner with a 10k PB of 44:35. I'm decidedly nervous about the outcome. I fear that I'll be buying the cappuccinos.

How much should I run, and how fast?

Flo wrote recently asking "Is more mileage better?" — to which Joe Garland replied "I think the more the merrier provided that you’re not constantly worn down." That pretty much answers the first part of the question posed by this post. Now I know there are runners out there who do amazingly well off "low mileage." Like my friend Kathy S, who runs very fast age-group times off 50 to 60k per week. That's kilometres, not miles! I'm not the type of runner who can produce PBs off low mileage, no matter how intense those miles are run. I'll run as much as I can — more than 80k, but a good few less than the 170 to 200 weekly kilometres Scott Brown's putting away.

So, my simple plan will be modified. A confession here — it wasn't working that well anyway! One day of long easy running wasn't enough to recover for a hard session. I'll try "Simple Plan 2.0." — a workout day followed by two easy/long days. The second part of my question is "How fast do I need to run?" For the easy days, I don't believe it matters. The easier the better, so my legs are good-to-go on the workout day. The famous black/white training of Nic Bideau. Or in my case, black/white/white. How fast do I run on the workout days? Maybe a variety of speeds — from near maximal sprinting all the way down to half-marathon paced tempo running. I see sprinting as important because my old mate Gerard Ryan (3k steeple in 8:30-ish) said that 5k speed depends on how fast one is over 100 metres. At the present moment my 100 metre speed is more Athabasca Glacier than Niagara Falls. 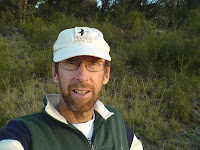 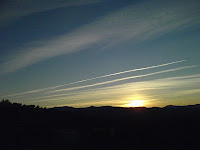 Sunset over the Brindabellas from the same location
Posted by Ewen at 7:18 pm 28 comments:

How to choose an event

Following up on my last post, I thought I'd outline my reasons for choosing the 5k as my main racing distance for the foreseeable future. I've used a simple table to do this — with a rating of 0 to 10 for different reasons to choose an event. The 5k is the easy winner, 40 points to 23. The 'good at it' row is based on my performance as a percentage of the world record. As you can see, I've pretty much sucked at running ever since I started doing it! My best event ever was the 800 metres, at 74.9% of the world record. As a 50+ aged runner, my 1500 ranks highest. I'd like to get the 5k up to 70%, which would mean running 21:05 at age 53.

I hope everyone is having a great weekend. I know some have raced the Christchurch Marathon, and some haven't. I raced an awful 8k cross country race yesterday, which is best forgotten. An enjoyable 15k jaunt through the Aussie bush later this afternoon will make up for it.