I'm happy with how I ran in my 28th City to Surf a couple of weeks ago. The goal going in was to duck under 70 minutes for the 14k (the new standard — reduced from 75 minutes — for retaining an A-group 'red' start). On the Thursday prior to the race a sore throat indicated the onset of a cold. This turned into a pretty nasty one as I'd totally lost my voice by the Monday. Once again I raced 'watch-less' and felt like I was moving well (and fast enough) when Warrick came up beside me as I ran into Rose Bay and said: "Hey Ewen, you're going well!"

My 'no watch' running method was somewhat compromised by hard-to-avoid large race clocks at 7 and 10k. The gun time at 7 said 35:XX and 50:XX at 10 — I guessed I'd taken about a minute to reach the start-mat so knew that my sub-70 goal was safe. I didn't bother letting it all hang out running down the hill. During the race I wasn't overly concerned when I came up behind runners who were moving a bit slower than my pace. I'd ease around them when it was safe to do so. Down at Bondi my final time was 67:54 (4:51 per k), run at an average heart-rate of 144. I was one happy chappy!

Canute observed in a comment on my last post that my pace has slowed by a little over 1% per year since 1988. Exactly 1% and I'd have run 66:24 which I think is possible on a good day and starting closer to the front of the A-corral. August the 12th this year wasn't a good day. The weather was more typical of the Pacific Northwest in winter. It was cold and we were running into a fresh southerly for the last 6k of the race. Not a lot of fun!

Slowing as we age is a fact of life. Unless, like Scott Brown, you started running in your forties — then you can look forward to defying the ageing clock by steadily improving for 10 or more years. I started running in my twenties and reached my 'PB peak' in my mid-thirties. Since then, it's been all downhill! To keep racing fun I try to run obscure time goals (like breaking 20 minutes for 5k), or score 'wins' over rivals with similar running form. I now have a new somewhat obscure racing goal: I'm going to try and run with Joanie. 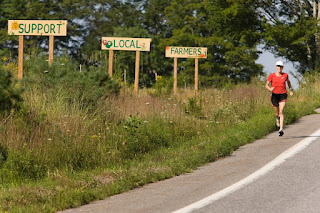 Joanie running in Brunswick, Maine (photo from her Facebook page). I ran 7k there on the morning of 27 July last year.
Posted by Ewen at 8:49 pm 19 comments:

I've just watched the replay of the men's Olympic 10,000 metre race from London. It was an exciting race! The slow-striding Mo Farah won with a sustained 500 metre 'sprint' (last lap in 53 seconds), finishing ahead of training partner Galen Rupp. A triumph for coach Alberto Salazar, who I remember watching as one of the favourites for the '84 Olympic marathon, along with Rob de Castella (who shared Australian commentary with Steve Ovett for the London race). Rupp was featured in the July edition of Running Times. As per usual, the magazine also had a section for Masters runners. I'm always fascinated by the training and running philosophy of the chosen 'Age-Group Ace'. Ever since I started running I've been a rusted-on middle-of-the-pack ace. For a bit of fun I'm listing my training for the 1988 City to Surf in 'Running Times style'. Looking at it 24 years after the fact it reads like the training of a different person. The only session I could do now would be the 'easy day' — if I ran at race effort! 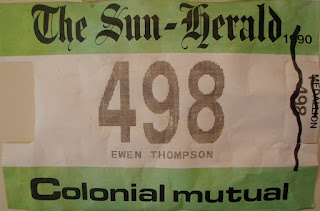 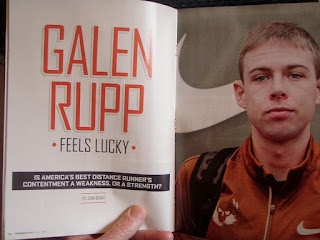 Galen Rupp: contented and happy after the London Olympics
Posted by Ewen at 10:40 am 15 comments: