The rival who is hard to beat

I'd been looking forward to the Canberra Half Marathon Eve 5k as an event I'd try to peak for and run as fast as possible. My expectations crashed on the Monday prior to the Saturday, 23 May race date. I was warming up for a Speedygeese session at Parliament House when I tripped on the most minuscule step from grass to a concrete path. Down I went, landing heavily on my left hip and knee (but  being aware enough to keep my Garmin hand from smashing into the ground).

No running for two days (stiff and sore) then still bothered during a treadmill run on the Thursday. My confidence was shot well before jogging a short warm-up on Saturday afternoon. I started next to Brian Wenn, a rival of mine who has always been very hard to beat. When I was in my twenties it was virtually impossible — Brian was a sub-35 10k runner when I was running 37 minutes. As we aged, the performance gap narrowed (helped by Brian's injury-prone stop/start training leading to him spending more time on the golf course and less on the running tracks and trails). Brian is 66, so more experienced than myself to the tune of eight years. Is that why he's so good? His recent form was a little intimidating — 22:14 for the Stromlo 5k in March.

We raced off, together for the first 400 metres, in (distant) pursuit of the fast starting Jim (who would split 4:17 for the first kilometre). Brian gradually edged ahead, metre by metre. I was running ragged, feeling close to my limit. After 1k I found myself closing on a couple of kids and Jim. Woohoo, he's slowing! But not Brian! The third k up the little hill past the Yacht Club was my slowest, but I was now holding the gap to Brian. On the return journey there was nothing I could do to close in, even though I passed a slowing young boy. This race is hard! Even though I was unaware of time splits, I felt we were running quickly — faster than the "I'll be happy with 23" Brian declared on the start line. The last k was a slog but I still 'sprinted' the grass finish straight. 29th place (out of 56 finishers) and 22:55, with Brian running 22:46. Another 'loss', but it had been good fun. Love racing!

Afterwards, the Garmin showed my splits: 4:32, 4:34, 4:49, 4:34 and 4:24. It had been a lovely warm, late autumn afternoon race (more to my liking than the freezing Parkrun early morning starts). A week later, my hip and knee are feeling normal and I'm looking forward to more battles with Brian — hoping we can both edge down to a sub-22 5k. 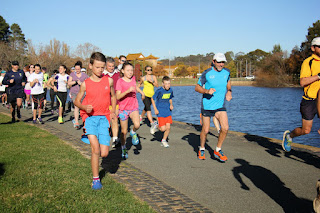 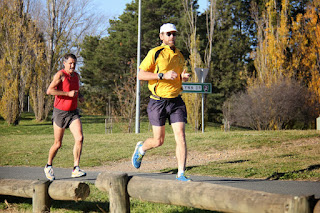 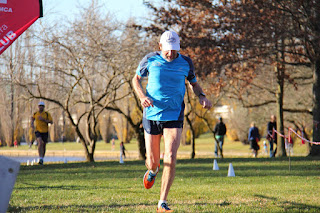 Brian finishes 9 seconds ahead, with Jim in the distance. [David Appleby photos]
Posted by Ewen at 11:45 am 12 comments:

On the 18th of April at the Tuggeranong Parkrun I was racing Geoff, Julia and Scott. All three started fast (too fast I thought), and had a good lead by the 1k mark. My split there was 4:30, so right on Parkun PB pace. I tried hard, more or less holding the gap to Julia and Geoff until 4k, while gradually closing on Scott. Geoff took off and ran a very good time for an almost 67-year-old of 22:06. Julia finished 10 seconds back while I got close to Scott (22:37), finishing in 22:45. A good time for me, but not great. I'd define 'great' as sub-22 and 'very good' as 22:15.

The following day I rode in my second cyclocross race, which used the Narrabundah Velodrome infield and surrounds. Love it! Love it! Love it! If I'd been born in Belgium, cyclocross would have been my sport. It has all the things I like in racing: Nice and short (20 minutes to an hour); the thrill of speed and close competition; the need for skill and technique; relative safety (no rocks or trees to crash into if you get it wrong, like mountain bike racing); not too much mud (we're in Australia!) and a supportive friendly atmosphere. It's the cycling equivalent of the 3k steeplechase and traditional (fence hurdling, creek jumping) cross country running. Although I was feeling a little off-colour that morning I still enjoyed myself — finishing 9th in C-Grade out of 15 riders (12 men and 3 women). The only problem with cyclocross racing in Canberra is not enough races!

On the 2nd of May, back at Tuggers for the Parkrun, I was racing young Isaac again. The poor lad wasn't feeling the best and I was much closer to his heels than the last time we raced. Jen ran a few metres ahead, encouraging him to get a move on and try to run a PB. I closed to within 20 metres on the bridge before the 4k mark but was unable to increase my speed in the last kilometre. Another win to Isaac! 22:30 to my 22:41. I placed 30th out of 180 (quite a small field for Tuggeranong, due perhaps to the inclement weather). My splits were even once again — 4:35, 4:30, 4:34, 4:32 and 4:30. I'm confident if I keep at it there will be a race where 4:27 k splits are doable.

GoPro camera view of my race (just the one crash)
Posted by Ewen at 9:29 pm 11 comments: