I Hadd to confess 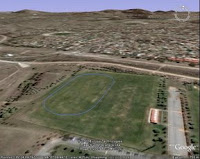 I've just finished another week of lots of running. 103 kilometres. Sometimes I wonder if I'm about to slip off the knife-edge like Steve L. I think I'm surviving Hadd-training by sitting on a blunt knife-edge – doing more lower aerobic runs and trying for earlier nights. Last Sunday I ran in the Sunday Telegraph 9k Bridge Run, along with 8,500 others. It was a fun day. On the same delightful Sydney morning, LLs ran a surprisingly good half marathon – 2:29:10, not bad for a girl of three score and sweet eighteen! I bet John Hadd would be impressed. Next Sunday will be my second half marathon for the year, The Asics Melbourne Half.

One notorious part of Hadd-training is the 2,400 metre lactate test session. It's supposed to be run "periodically, bearing in mind the 6 week period needed for mitochondrial growth". John Hadd's pupil Joe ran it every four to five weeks. Last Tuesday down at Calwell, I bowed down and said: "Forgive me John, for I have sinned. It's been eight weeks since my last Hadd test". With trepidation, I started in my familiar lane six and ran the test – five repeats of 2,400 metres at set heart-rates. I dreaded the final two runs at heart-rates 144 and 152. Thankfully, only the final one was really hard, as I had to run with unfamiliar speed to push my heart-rate up to 152 (92% of maximum).

The result was good! I was faster at all heart-rates, including the ones I hadn't trained at, just like John Hadd said I'd be. I found an online graphing website to produce a graph comparing the two tests I've done since starting Hadd-training. Earlier in the year I was racing 5000 metres at an average HR of 157 to 159, so I'm keen to see what time I can run now, even before starting speedwork.

I hope everyone has a great week!

Promise from a 10k race

Last Sunday I raced in The Canberra Times Fun Run, the biggest 10k in town. I had an odd sort of a race. In the week prior, I'd been flat out like a lizard drinking. Working long hours and doing long runs was wearing me out. By Friday I was feeling decidedly SteveLaceyish, so had a rest day from running.

On Saturday I went out to see how the pins (as 2P would say) were feeling. Not good. After 3k of shuffling, I decided my desire to run well on Sunday was overly ambitious, so changed a planned 6k easy jog into a 15k Hadd run (which strangely got better with the passing kilometres).

Sunday was a fragrantly delightful Spring day. Such was my lack of confidence about being able to run well (and addiction to Hadd mileage), that I decided to include the 10k race as part of a long run. Training shoes for this one, not the lighter Frees. I parked at Parliament house and 'warmed up' by running 6.4k back to the start, arriving with 10 minutes to spare.

Before long I was racing back from whence I came, running not far behind Sonia from the Speedygeese. Curiously, I wasn't feeling too bad. The 1k mark came up in 4:29 (really 4:17, as it had taken 12 seconds to get to the start mat). The next two kilometres were 4:11 and 4:16! Wow – 12:44 for 3k. This is strange, I thought, I'm running quickly. Then came 'the hill' up to John's house at 5k. I couldn't push my heart-rate above 155. Normally on a hill it'd be 160ish. My 5k split was 22:34. I was being overtaken by young children and old men now, but thankfully, no grandmothers pushing prams.

For the next 5k I ran along as best I could, feeling a bit tired, but not terrible, and with the heart-rate now around 148-150. I felt good in the final kilometre, enjoying running the last 300 metres or so with a very talented young girl, who sprinted ahead under the timing clock. I was very surprised (and pleased) with a chip time of 45:43. Now I just had to run the 4.5k back to the car!

I've been thinking about what can be learned from this race. Robert Song's suggestion about having a "target 5k race", rather than just racing regularly through the summer season has merit. I'm thinking of a compromise – a target month – maybe February, where I can race two or three times seriously, therefore giving myself a chance of good weather conditions (no wind and not too hot). The 5k at the ACT Vets Championships is also tempting, but that race is usually held in late March, not long after my 45k bush walk/jog through the Blue Mountains.
Posted by Ewen at 8:31 pm 14 comments:

A mate of mine reckons I'm like the drummer in a band. You know – the person who can't read music but likes to hang out with musicians. This so-called mate says I run and coach because I like the company of athletes.

Running is similar to music in that anybody can have a go. Just as you don't need talent to pick up a guitar and start strumming away, nobody's stopping you from lacing up some shoes and running. Ours is a sport which accommodates people with different talents. Fast and not so fast. If you're fast, you sprint 100 or 200 metres. If you have natural endurance, you might run from Sydney to Melbourne. I'm not so fast, but I don't want to run that far. I'm a lazy drummer. I wish I had the talent of Joe Morello, then at least I'd have the reflexes to approach Speedygeoff's magical 180 strides per minute. 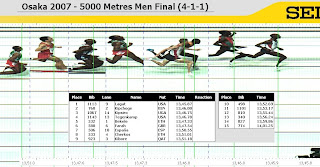 Athletes usually find a niche event. One to which they're best suited. Janeth Kipkoskei runs the 800 metres because she can win by running away from the best 800 metre runners in the world. Catherine Ndereba runs the marathon because she's physiologically suited to the event, and is too slow to win gold medals at 10,000 metres. Through trial and error, I've found my best event is somewhere between 800 metres and the marathon. I like the 5,000 metres because Craig Mottram said "the five is far enough".

This is a roundabout way of answering my blogging friends Bruce, R2B, and others who wonder where all this Hadd training is leading. The guess from Miners was very close. I want to use my theoretical higher lactate threshold from Hadd, to run a good 5,000 during the coming track and field season. How do I define a good 5,000 metres? I selected a goal of 20:46 at the beginning of the year, so that would be good. Robert Song's age calculator suggests this is equivalent to 18:29 were I not so crusty.

My first 5,000 will be some time in October. I'd like to maintain my current volume (100k per week) until the end of November. I don't have a particular target race. To practise running faster, I'll also do shorter track races during a long season which ends in March 2008.
Posted by Ewen at 3:35 pm 19 comments: