I expect my twice-daily dalliances with running will finish on Sunday. I'm on target this week for 135 kilometres (84 miles) — that's after covering 130 clicks last week. If I make it to Sunday without the wheels falling off, this will be my second biggest week ever. In late February '91 I ran a 140 kilometre week. A fortnight later I raced my lifetime PB for 5000 metres — 17:33.5.

I'd like to continue with 'doubles', but my work isn't conducive to play. Swinging a sledge hammer on a railroad gang, knocking down them cross ties, working in the rain, tends to develop a lingering tiredness, and a propensity for Walken-like instant sleep.

"How's the running been?" I hear you ask. Well, my friends... in three words — fun, tiring and illuminating. There's a chink of light shining on some physiological improvements. In my two races, I've felt strong, but understandably not that speedy or fresh. I raced a 3000 metres in 12:32, and last night recorded 21:54 in the 5000 to finish last. Yes, last! I was lapped twice by the female winner, a very svelte looking Jackie Fairweather. My time shaved negative 24 seconds from my M50 PB. I was hairier than a San Franciscan hippie! The illuminating part of the two races has been the feeling of having a strong heart and lungs. The Polar showed an average heart-rate of 89% for both races, which is encouragingly low. The legs however, were cantankerously tired and uncooperative.

I hold some hope though, that my 'holiday of running' will bolster my chances for an M50 PB in the 10,000 metres on November 13. If not, I'll still take with me a greater insight into how it feels to run fourteen times per week.
Posted by Ewen at 10:16 am 27 comments:

My stratospheric goal for 2008 was to race 3000 metres in 11:07. Although there are two months left, I can't see any way I'll be running that fast by year's end. I'm going to extend the goal until the finish of the track season (March '09) and beyond. Maybe forever! Scary thought: I might be pushing my Zimmer Frame around the AIS track as a 95-year-old, still chasing a "respectable" 3000 metre time.

For a diversion from this singular goal, I've pencilled in two 10,000 metre track races for attention. The first is organised by the ACT Masters on 13 November, and the second is the ACT Championship event on 15 January. I'd like to improve my M50 PB. Doing these two races shouldn't unsettle the 3000 metre plan too much. I'm encouraged that my training partner Kathy was able to race well at distances from 800 to 10,000 metres last season — she was ranked 5th in the world for her age in the 1500m, and won the ACT 10,000m Championship earlier this year.

I'm currently on two weeks' leave from work, and indulging in my love a little by running twice daily. I last tried this in 2005, attempting to emulate Eliud Kipchoge. In the past 7 days I've covered 121 kilometres (75 miles). My hard (speedwork) sessions are suffering a little, but not too much. My faster speed was OK a month back — 10 x 200m in 38.1, so I'd like to retain (or improve) on that, as well as restore some aerobic condition with the higher mileage weeks. 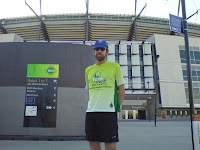 I'm fashionable!
My Six Foot shirt matches this sign at the Melbourne Cricket Ground
Posted by Ewen at 10:11 pm 17 comments:

Em is for Melbourne

On Sunday morning I raced 10k through the streets and parks of that most cosmopolitan of Australian cities, Melbourne. She was at her sparkling best — warm and welcoming. At 9.30am, around 4,720 similarly obsessed individuals charged off towards St Kilda Road. After passing stranded tram passenger "spectators", we turned left and ran along the lovely shaded avenues of King's Domain.

It was somewhere in this delightful park, around 2k into the race, that I became overwhelmed with the thought that I was close to moving like Christopher. I was feeling good! Runnin' like Walken. My movement was fluid — in my wild imagination I was a perfect example to children, teenagers, adults and fellow ancients, of how to run.

This is why I'm happy with a seemingly average finishing time of 46:38 — I felt strong and in control throughout the race. I was also towards the pointy end of the field. As we ran beside the Yarra River, with 3k to go, I was running in groups of two or three, with gaps to runners ahead. Before long we were racing down the William Barak Bridge, past cheering spectators, and into the stadium used for the 1956 Olympics — The MCG. I was the 211th of the 10k runners home. Not long after finishing, I heard my name called and turned to see a smiling Em. She's a runner I've always wanted to meet. It's hard to believe, but I think she loves running more than myself. One day soon, she'll be free of injuries and running well.

Bill recently suggested that I may be a better runner now than my younger self. By the numbers, I'm not. I'd need to be running around 42 minutes for 10k races. In Melbourne on Sunday the numbers didn't matter. It was how I was feeling as I was moving that mattered — fast, smooth, racy, and as happy as Em, to be a runner. 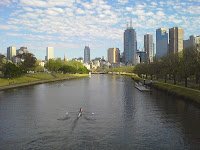 Between 6k and 8k the race follows paths with superb views of the Yarra River
Posted by Ewen at 10:07 pm 20 comments:

As much as I love running in mid-pack obscurity, there are times when I daydream about being like Christopher. Moving like him. As far as I know, he's not a runner. He's not the Christopher from Calwell; who was once one of the best middle-distance runners for his age in Australia; who's now training for Olympic distance triathlons.

The Christopher I'm talking about is the one in the Weapon of Choice video. There's one skill this particular Christopher demonstrates that I do quite well — sleep. Point me to a lounge chair and I'll be snoring like a trooper in 30 seconds flat. His other skill is the one that I'll never have — a natural flair for mesmerising movement. The kind of natural movement that's inspiring to watch, and when seen in a runner, offered as an example of "how to run".

Movement like Herb Elliott winning gold by running away from a class field in the Rome Olympics. Like Haile Gebrselassie smiling his way to a 2:03:59 marathon. Like Tirunesh Dibaba in Beijing, sprinting to a phenomenal 29:54.66 victory in the 10,000 metres. I daydream about having that sort of natural running movement. I'd like my mate Trevor to point to me as I run on the grass track at Calwell and say, "Patricia, that's how to run!" instead of, "Don't run like that!"
Posted by Ewen at 9:36 pm 22 comments: