I haven't been running much these past few weeks. Some focus group high up in Massive National Corporation has decided that understaffing the wage-slave class is a sensible way to improve productivity. We slaves have been working 11 and 12 hour days (including a 30-minute lunch break). If this madness continues, I fear I might have to "do a Thomas" — drag myself out of bed at 3:30 AM and run before work.

I raced a 10k on Saturday, finishing 60th in 54:57. I ran at high-end tempo effort (an average heart-rate of 87%). If I'd laced up the racing flats and let it all hang out (92%), I suspect I may have run around 52:30. What's interesting about this result is how much slower I race due to running less mileage. The faceless executives in a Sydney glass tower have given me this wonderful experimental opportunity.

Embarrassingly, I wasn't able to offer Jojo even a modicum of competition. I was unceremoniously smacked down — flattened to the canvas inside the first round! 49:26 for myself; 46:01 for the victor. Although it hurts, I'll be paying the café bill when next we meet.

It was one of those races in which I never felt entirely comfortable. Or in pain. Got stuck early in a groove that was more like half marathon effort. Started next to Andy, not too far from the front, but couldn't spot Jojo. After the gun, we were 14 seconds to the start mat; Andy ran to my right and gradually drifted ahead. He would run 43:42. I split the second kilometre in 4:43 (my fastest, but still slow) and soon after was running around 5-flats. It was my slowest 10k race since I-don't-know-when. The only bright spot was being amazed by the beautiful running of the girl who placed 5th in the 12-14 age-group. She flew past in the last kilometre. I bumped into her in the recovery area — she had just turned 12, and run 48:45.

A dud race failed to spoil my holiday. Had a great time with my roomies Andy and Ruth. Enjoyed running in warm temperatures and doing the tourist thing in summer clothing — an all-too brief respite from Canberra's sometimes gloomy winter. So, it's back to the grind of wage-slavery next week. Before then I hope to catch up with your blogs. We didn't have an internet connection in Queensland — being out-of-touch for a while was kinda nice. 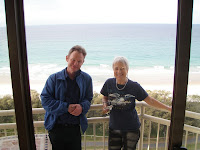 The view from our apartment was spectacular! 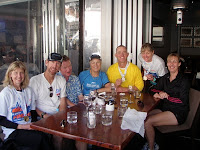 Enjoying lunch after the marathon on Sunday 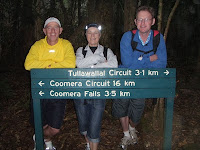 Roger, Ruth and Andy during our Tuesday bush-walk in the Lamington National Park
Posted by Ewen at 6:05 pm 19 comments: