Last Sunday I competed in the Blackmores' Sydney Harbour Bridge run and the Sunday before, the Stromlo ACT Sprint Duathlon. The duathlon was lot of fun — I think the result is further proof that these days my running and cycling are equally strong. Interesting, as when I was dabbling in triathlons in the mid-1990s, the run was by far my strongest leg, followed some way back by the bike with the swim a 'finally we can pack up the swim course' third. This race was a 5k run, 20k road ride, 2.5k run duathlon and my places for all three legs were similar — 61st, 57th and 58th. My place for the race was 55th (out of 83 finishers) and 2nd in the 55-59 age-group.

My plan for the Sydney Harbour Bridge run was to enjoy myself, not bust a gut, and recover quickly to resume my normal training. In the end, all went to plan and I actually ran a 20 second course PB. Very surprised at that! I started mid-pack in the A-group and as per usual, spent the first kilometre up onto the bridge weaving around people who started too fast. Luckily the bridge is nice and wide, providing plenty of overtaking room. I'd forgotten to pack my Garmin so used my trusty Casio to record splits for later analysis. I ran at a steady (hard tempo) pace for the first 5k, then got motoring, smiling inwardly as I overtook people for the next 4.23k. I was running this section pretty much all out, but there were times when it was simply impossible to run as fast as one would like, due to the crowded nature of the out/back section down to Mrs Macquarie's Chair. My final time was 45:03 (4:53 per km), for 790th place out of 11,481 finishers.

The 5k race was the Customs Handicap lunch run on the Friday before Sydney. The 'Floriade' course is a flat double out/back with only the two U-turns (and wandering tourists) slowing things down. I ran with my mate Jim for the first kilometre, feeling very easy. I then accelerated, pushing quite hard with a rough goal of breaking 23 minutes. Only just made it! 22:58, with my average heart-rate being 144. Kilometre splits had been 4:38, 4:29, 4:32, 4:45 and 4:34. I was most happy with how I felt during the run which gives me confidence that averaging under 4:30 per k for a 5k race isn't far off. This coming Sunday I'm racing the in ACT Duathlon Championships (10k/40k/5k), with no goals besides enjoyment and not crashing. 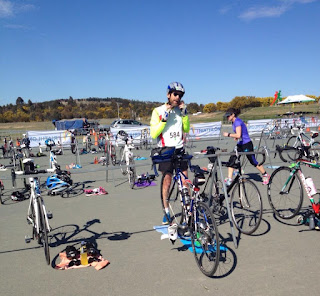 Helmet on after the first run leg (had a good race with the lady in purple), and there are still bikes in the transition area! Thanks Ruth for the photos. 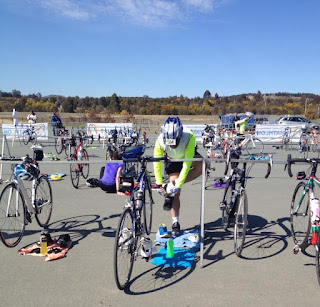 Balance test, putting on my cycling shoes. Not sitting down! 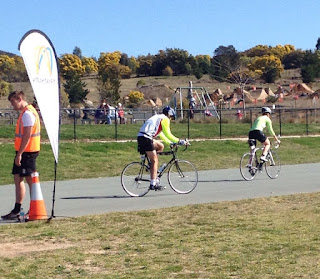 Perfect running form, and other thoughts about cycling

I used to run with a bloke who, when he ran, reminded me of Henry Rono. My friend ran with beautiful form that made me, a marathon shuffler, extremely jealous. The funny thing is, my friend wasn't that fast — he ran around 20 minutes for 5k when I'd run 19 (this was a long time ago!). I suspect my friend's exquisite form was part natural and part emulation. He had a high heel-lift and loped along with ease — his cadence was slow, in the manner of Mo Farah, but with a stride quite a bit shorter than Mo's two-plus metres. Lovely running form isn't everything, but I still wish I could run like my friend.

There are many reasons why I like cycling, one being there doesn't seem to be such a thing as 'perfect cycling form' — no high heel kick, hip and knee drive, elastic (Paula Radcliffe-like) recoil off the ground of the perfect runner. My feet are attached to the pedals just the same as Chris Froome and my legs go round and round and round. I can even spin at the high cadence of Froome — in fact if I were to ride next to the great man (at a speed I was capable of, say 30 kph), no spectator would think 'that man's form is terrible, yet he's keeping up with an elite athlete.'

As a professional runner, I think I'm close to zeroing in on my ideal training day. In previous posts I've mentioned Jack Farrell's article: 'Re-Thinking The Hard-Easy Myth' where he explains why too much rest has just as negative an impact on development as over-training, by violating the principle of balance. Jack's runners train at the same intensity level every day, with no really hard days, but also no easy or rest days. Variety is achieved by running on different courses. "The goal of this training is to lower the comfort zone, that is the pace at which an athlete can run gradually longer distances at a steadily decreasing pace." I think my ideal training day is 50 to 60 minutes of running in the (late) morning or at lunch time, followed by 90 minutes to 2 hours of cycling in the late afternoon. This is something I can repeat day after day, week after week... Cycling in the morning and running in the afternoon doesn't work! I've tried it and my runs have been ordinary to terrible on those days.

Just recently, with all this volume of aerobic exercise, my running has started to feel really good — today 5:10 per k pace was only producing a heart rate of 132, slightly above my MAF heart-rate. So the legs have been strong and the heart has been cruising. On Sunday for a slight change from day-after-day training, I'm competing in a duathlon out at Stromlo — 5k run, 20k bike, 2.5k run. Should be fun! 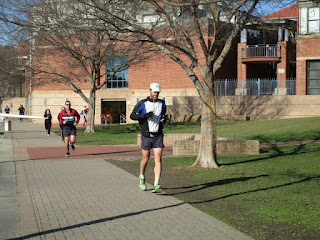 Shuffling along with less than perfect form at the Tuggeranong Parkrun 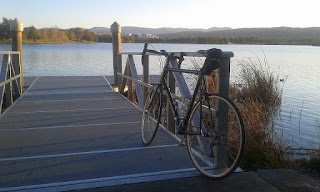 Testing the old Aluminum bike at Lake Tuggeranong this arvo
Posted by Ewen at 8:26 pm 11 comments: