I suspect this could be my last post for the year. If so, I hope you've enjoyed a happy year of running — or at least a year where you've learned something! Running's a game where you never stop learning. For instance, last night at Yelena's 30th birthday party I was chatting to a bloke who is recovering from achilles tendon surgery. His torn achilles (in a soccer game) was caused, he suspects, by training in running shoes with built-up heels before switching to soccer boots with no heel-to-toe drop. The broad running lesson here could be to "don't suddenly do something different!"

I've no more races scheduled for 2011 so my goal of running a sub-20 5k will carry over to 2012. A few recent training sessions have offered hope that I'm not far from the next jump in performance. On Friday I ran a 'tempo' 5k on the grass track at Calwell in 25:20 after a quick 5k warm-up. The HR trace for this run shows 'the hill' on the Calwell track. I run up the hill from the finish line to the 200m start then down the hill back to the finish. It's a very slight hill, but my heart notices it!

Twelve and a half laps of Calwell
On Saturday I ventured out to Stromlo for a community run with Deek (Rob de Castella) and four of his Indigenous Marathon Project runners. They were in Canberra for a training camp. I was impressed by the female runner, Kelsey Youngblutt — she could pass for Deratu Tulu's younger sister! The group is training to run in next year's Boston Marathon. An inspiring documentary 'Running To America' was aired on ABC-TV about the project and how the first runners tackled the 2010 New York Marathon. You can watch it here until the 15th of December. 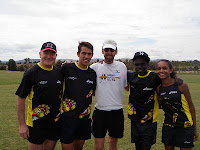