Since my last blog post in May I've grown in confidence and have been enjoying my running. I feel like I'm moving well and with that, becoming faster. I agree with Pete Magill when he says "If you want to become a better runner, begin by running better." I don't agree with the oft-expressed philosophy that running is a simple thing that we all learn to do naturally as children and to run faster you just move your legs faster. When we observe runners in a race it's easy to pick out the runners with good form and those with bad form. Sometimes those with 'bad form' are faster than those who look good — some people say 'it doesn't matter what you look like if you're running fast, your form is natural to your own physiology and shouldn't be changed.' I believe all runners can make adjustments to their form which will help them to run better and faster. Having said that, don't make wholesale changes and expect problem-free running. Change gradually, just as you would gradually increase your mileage or the amount of speedwork in your training.

My weekly mileage is now averaging 78 kilometres. In that mileage there's some 'vert chasing' on a couple of days. Last week I climbed 1,666 metres according to Strava. The reason for this change is to build leg strength and resilience. I'll look for the steepest hills I can find, hiking strongly the 'ups' then running cross country on a gentler descent for balance and speed. It's fun! My 5k race time is down to 24:46, run at the YCRC Half Marathon Eve 5k on 26 May. I enjoyed the race, running with Brian early as we chased Jim. I couldn't close the 100m or so gap to the group of Christine, Miriam and Richard as we ran towards the turn. They ran 22:59, 24:03 and 24:07 which is where I'd like to be in another six weeks. Last Sunday I ran in a 2.5k cross country race and had a fun 'win' over Dave, who left his finishing sprint way too late! 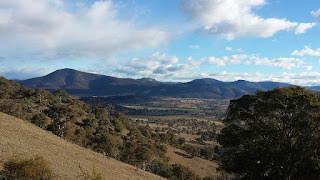 View of Mt Tennent from the lower slopes of Mt Rob Roy
Posted by Ewen at 6:41 pm 7 comments: