I've decided to write about races in a little detail as a record of my progress towards racing 5k in under 23 minutes. Since the last blog post there have been two full effort races, a 3000m on the track and a 5k Parkrun at Wagga (strictly not a race, but a 5k timed run which many treat as a race). I also raced the Fisher's Ghost 5k a little off full effort (wary of the hilly course) in 24:29, 11 seconds slower than I ran in 2017.

ACT Masters' 3000m, 8 November — I was hoping to run a season's best and dip well under 14 minutes but I had one of those awful races where the second half feels like you're running through ever-deepening mud. It was an unusually cold night at the Woden track, not my favourite weather, about 9 degrees celsius. Helen was running and had been good form, recently breaking 30 minutes for the hilly BBQ Stakes 6k lunch run. I started a little faster than customary to take up a position following Helen for the first 3 laps, passing 1000m in 4:34 (13:42 3k pace), Dale and Roger just behind. Then it all started going wrong, the elastic to Helen breaking as Dale and Roger gave chase. I continued to fade, running the second km in 4:44 and third in 4:53, finishing 11th in 14:10.4. Roger way ahead in a good 13:40 followed by Helen in 13:51 and Dale in 14:06.

Wagga 5k Parkrun, 17 November — A much better race! Three members of the Speedygeese were running, Geoff (chasing the M70 course record), myself and Lisa (returning from injury). It was a beautiful morning, calm as we warmed up (which turned into a very gentle breeze), perhaps a fraction warm at around 17 degrees celsius. The small field of 124 runners and walkers allowed us to take up position close to the front on the wide start line. Geoff took off purposefully (I knew he was aiming for under 24 minutes), and his pace felt just about right as we moved past a few overenthusiastic starters. "Sub-5 pace?" enquired Geoff after a few minutes. "Definitely!" The 1k split was 4:37 and we were still catching people. I eased ahead of Geoff on the rough section at the north of the lake, setting my sights on catching a lady running about 30 metres ahead of us. The split for the second k was 4:41 and I knew Geoff wasn't far behind (hearing his loud breathing, which continued all the way to the finish). I overtook the young lady (she would run 25:03) before the turn on the out/back course. I tried to keep the speed up running back and it felt like I was, even though the next two splits were both 4:48. I had another bloke to chase for the last kilometre as a young runner flew past, making us both look slow! A final sprint for the line and 24th place in a time of 23:42, Geoff not far behind (smashing the M70 record by 2 minutes) in 23:50 and Lisa having an excellent run with a course PB of 25:09. Good race! 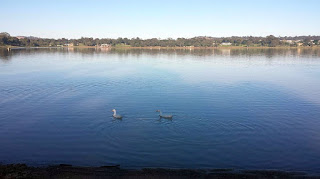 A calm Lake Albert, perfect for ducks and geese

A lot of running and a rare win

The 2018 goal of breaking 23 minutes for 5k is still motivating my training. I think I can do it! I've raced regularly since The Canberra Times 10ish k but none have been 100% flat-out efforts. My weekly mileage has also been consistent, averaging around 100 kilometres per week. I feel fit and just need a calm and cooler day for a fast race. Cool and calm days haven't been as common as warm and windy days of late.

With my future training I plan to only run 'hard' on two days per week and I'd like to make those days very hard. One day will be a race, most likely on the track at the Thursday Masters' meetings. I will race the 3000m or 5000m most likely, with an occasional 1500m. On 18 October I ran a 5000m, placing 2nd in 24:14.2, a long way from 23 minutes but it was a warm night and I wasn't motivated to 'go to the well' that evening. Last Tuesday afternoon I ran 23:59 on bikepaths in 'The Boathouse' 5k. Once again it was warm and we were running into a headwind for the second half of the race. My legs felt good and I was moving well so that was pleasing.

Back on Sunday 21 October a large group of Speedygeese headed out to Tarago for the annual 'Run with the Wind' Fun Runs. I entered the 5k and knew there were only a few old blokes entered in the 60-69 category, my mate Jim one of them. The course was out/back on a smooth gravel access road to the giant wind turbines and over challenging hills. The start was crowded and I had no idea of my place until the leader and those following him came back from the turn. Most were obviously young and fast but I was on the lookout for the wrinkly skin and grey hair of ancient runners. Nothing! A couple of runners looked to be around 50 but I appeared to be racing for the win. Good fun! All I had to do was stay ahead of Jim and Jeff and I'd be on the top spot of the podium! I ran back to the finish (walking a couple of times on the hills), pacing myself with teenagers and 20-somethings, not concerned with the time, just winning. And that's what happened. Racing without concern for the finish time is liberating and enjoyable. I like racing! 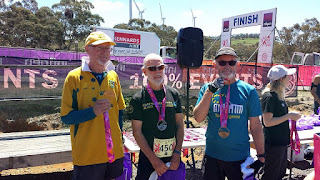 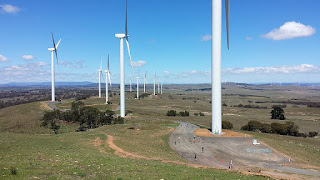 Spectacular views from the 10k race turn
Posted by Ewen at 1:38 pm 3 comments: