What difference does mileage make?

Once I recovered from the City2Sea I commenced a gradual return to regular running. After a few days I discovered that daily outings were reducing the level of pain in the left hamstring, and paradoxically, rest days had the opposite effect. I surmised that my gentle jogs were giving the cantankerous muscles and tendons a beneficial stretch while rest days caused them to tighten. On the eleventh day of training I was 20 minutes into an easy 8k run when I noticed a fairly sudden pain in the lower right calf. Instead of stopping and walking it in I continued jogging. The next day I had to limp just to walk — running was out of the question!

I took four days off, jogged (with only one brief twinge) the 2k race at Stromlo, then took another four days off. Last weekend I was visiting Urunga for an 80th birthday party and went body-surfing in the delightfully refreshing salty water. While doing this 'foreign exercise', I tweaked the calf again — how annoying! Another four days off were needed before I was able to jog 2k on the grass track and 2k at the Parkrun yesterday morning. The calf felt fine, so I plan to gradually increase my daily run distance over the coming weeks. I'll also try and improve my running form as I found (thanks Rick!) this great video showing miraculous improvements to chronic hamstring pain. Core engagement, pelvis position and hip mobility play key roles in solving hamstring issues.


Prior to the hamstring injury I'd been running around 64 kilometres per week. This mileage was all steady MAF heart-rate running apart from Parkrun 5k and YCRC races. A week after the 12k mountain run in early October I raced the Tuggers 5k Parkrun in 23:10 at an average heart-rate of 146 (close to my best 5000m track time for the year). Four days later the left ITB/hamstring started feeling niggly. Five weeks after the aforementioned good 5k I raced the same course again (flat out) and ran 25:32 at an average heart-rate of 149. Obviously my aerobic condition had fallen away with the dropping mileage. I'd averaged a little over 16 kilometres per week prior to the second 5k race. A gross simplification I know, but quadrupling my weekly mileage from 16 to 64 would appear to improve my 5k race time by 2:22. Mileage makes a difference to how fast I am in 5k races. Would doubling my mileage to 128 ks per week take another minute off my 5k time? Maybe, but I don't intend to try and run that many kilometres any time soon. Maybe when I retire! I'll let you know how long it takes me to get back to 64 kilometre weeks and sub-23-minute 5ks. I hope this will be a time measured in weeks rather than months. 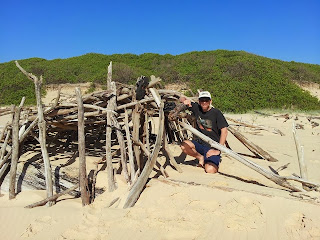 My beach house at Urunga was air-conditioned but sandy
Posted by Ewen at 1:10 pm 23 comments: