Lydiard and the Quarter Mile

Why the secret to running fast is confusing

Recently I stumbled upon a fascinating article titled 'Train SLOWER to Race Faster' by Andy Friedlander. It wasn't (as you might suspect from the title) about Lydiard-coached runners logging 100-mile weeks in the base-training period. It was about 400 metre sprinters! Now there's a contradiction in terms — how could training slower possibly produce a faster quarter-miler? Isn't the one-lap race all about speed, speed and more speed? Apparently not!

It turns out that the great coach Clyde Hart (maker of Olympic gold medalists Michael Johnson, Jeremy Wariner and Darold Williamson) found that "the key to running fast 400s is to slow down." Hart's method of training quarter-milers came about when trying to get an injury-prone Michael Johnson through a full season of racing. Hart's system is Lydiard-like in that it begins with a large volume of easier running (to build strength and aerobic capacity — Hart believes the 400 is 40% aerobic), then gradually progresses to a smaller volume of faster running. In the autumn his athletes start with 20 x 200m "at a very slow pace, about 40 seconds each, on the grass." Now 40 seconds for 200 metres is incredibly slow for an athlete with a PB of 20 seconds or less. These are done with a short recovery. As training progresses "pace quickens and the repetitions shrink, but never to the point of full-speed sprints." Eventually his athletes might be running 6 x 200m in 26 seconds with a 90 second recovery. Training 'slowly' didn't produce plodding runners with fast-twitch depleted muscles. It produced athletes with the aerobic capacity to withstand a full racing season and the multiple rounds of championship competition.

Janene has blogged about the 80:20 rule of training for distance runners (which states that 80% of running should be below lactate threshold and 20% above). This ratio is more likely to be 85:15 or 90:10 for elite distance runners. What's confusing for recreational runners is that the perfect ratio varies according to the weekly volume run, age, and individual response. If running volume and frequency is low (for example, 3 days per week for a total of 40 kilometres), then the best ratio of 'easy' to 'fast' running might be 30:70 or 50:50. As volume is increased, the ratio must change. For example, it would be physically impossible to run 160 kilometres per week with 70% of that running being above lactate threshold. One pay-off with higher volume training is that the volume of 'above lactate threshold' running can be higher.
Posted by Ewen at 5:20 am 19 comments:

I try to embrace poor races because they usually teach rich lessons. I ran a 3000 metre track race Thursday night — this time finishing fourth-last in a time of 13:34.93, around a minute slower than I expected. I ran at the pace (4:31 per km) that I'd hope to hold for a 10k race. I was lapped twice by the winner Marty Dent (8:38) who I guess only ran at his 10k race pace; but he had the excuse of winning the mile an hour earlier in 4:25! The lesson I learned from this race goes back to the training I did with the Speedygeese on Monday night...

I've felt for a while that my fast-twitch muscles (and leg turn-over) could do with a boost. If it's not possible to run comfortably at 48 seconds per 200 metres (4 minute kilometre pace), then it's going to be bloody difficult to race a 5k in 20 minutes! I modified the session that Geoff had set out to give myself sufficient recovery to run at close to maximum speed for 200 metre repeats. These were run on a smooth grass foot-path with a favourable slight down-hill slope. I ran 11 repeats, walking back to the start each time in about 2 minutes. The average time for my 9 best runs was 42.1 seconds, which works out to be a tad over 3:30 per kilometre, so quite a change for my legs compared to my normal running speeds.

On Tuesday I ran 10k in 58:28 with legs that felt a bit ordinary. Wednesday another 10k in 57:55 but with a noticeable case of DOMS! Did those 200s do that much to my legs? On Thursday night I jogged a very easy 5k warm-up with Ruth — legs all the while feeling like they didn't want to be there. After the split start I ran a little bit behind Hugh, Carol and Amanda with Bob just on my heels. After two laps Bob eased past (he ran 12:57) and I gradually lost ground for the remainder of the race. My legs weren't agonisingly sore — they just weren't responding as I would have liked. Splits were 4:22, 4:38 and 4:34. So I guess the lessons from my bad race are that I do need to keep working on my speed and not to expect to race well with sore legs. My week's training will total 80k, including a good 'long' 15k run around Lake Burley Griffin yesterday and a pleasant recovery 13k run on the grass out at Stromlo Forest Park this morning. 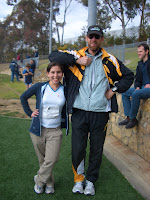 My running has been going reasonably well, although my heart-beats per kilometre readings have taken a hit since giving blood last Saturday. Prior to that I'd been recording 710 to 730 HB/KM for my 10k courses. Three days after giving blood that number was 757. A temporary hiccup. I raced 5000m on Thursday at what I estimated to be a high tempo effort rather than all-out. In a 40-person field I finished last in 23:55.74. I was dizzy counting the number of times I was lapped!

The training I plan on doing to run 20 minutes for 5k revolves around two things: 1) Consistency, and 2) "5k" Training Sessions. I want to run consistent mileage (the more the better, provided I'm recovering well). I want to run one (or two if I'm not racing) sessions per week of race-paced or faster running of the type that Julie's doing as she edges towards 20 minutes. I started on Monday with the Speedygeese and a 10 x 200m session on one of the grassy footpaths at Parliament House.

If I'm to run 20 minutes for 5k I should fine-tune my heel-striking running technique! [J Harding photo]
Posted by Ewen at 4:34 pm 24 comments: