Have I told you lately how much I love running? In the 1980s I ran with a group in Lane Cove National Park. When we talked about runners who were injured, we'd refer to their wheels — as in "Hippie Steve's wheels have fallen off." We'd say the same thing if a runner failed to finish a race — "Jenny's wheels must have fallen off." Yes, we were indestructible heartless bastards!

Well, since Saturday afternoon my wheels have been off and on like those of a Formula One car. When on, they've been buckled. I've done two short runs — both Cliffy shuffles that had me feeling like Walt Kowalski chasing the neighbours from his front lawn. I did something to my back. I'm pretty sure it's a pinched sciatic nerve.

Today, standing up and walking is less painful, so I'll try another easy run this evening. This minor drama makes me think about how much I'd miss running if I were unable to do it. I'd miss it a lot. I first had this realisation after my second marathon in 1981 — a knee injury made me a spectator for five months. Since that time, I've always trained conservatively, hoping that keeping something in reserve will extend my time as a runner. I'd like to run until I'm old enough to say to the Walt Kowalskis of my neighbourhood "Hey young fella — back in my day we used to chase kangaroos to exhaustion around the grass track at Stromlo!"
Posted by Ewen at 4:46 pm 29 comments:

I've been glutinous this week, finishing three races — all were ACT Masters Championship events. On Thursday evening, in astonishingly cool conditions after last week's heat-wave, I raced the 1500 metres. The 50-59 males were grouped together and I finished 6th (last) in a confusingly slow 6:03.49. I was hoping to run around 5:45. An hour later, still mad about my poor result, I competed in the 5000 metre race-walk. With no expectations, I was more than happy to place 2nd M50 in 29:49.61.

Yesterday morning, Canberra's soothingly cool weather was just about perfect for distance running (except for a persistent breeze which was a home-straight head-wind). I decided to race the 3000, rather than run for a time, having thought about Canute's comments in my last post: "maybe you are paying a bit too much attention to the stop-watch at the moment. Your ‘epic’ battle with Lily in the 800m last year demonstrates that it can be fun to set a different sort of race target from time to time". Fortuitously there were a number of runners with similar form to myself, which made for good racing.

Kilometre 1: I took up a position on the outside of the curved start-line, next to Speedygeoff. At the gun, I moved towards lane two, slotting in behind Gary and Nadine, with Carol and Amanda just behind. Gary was following Geoff, and set a perfect pace for the first kilometre, which we passed in 4:05.

Kilometre 2: This is the part of a 3k where I usually lose time. I was determined not to let any gaps open to my pace-makers ahead. Gary's pace slowed slightly running up the back straight, so Nadine went past, with myself and Carol following. Carol then overtook me, so I sat behind for half a lap before resuming a spot behind Nadine, who was running with great strength. I would have loved to have shared some of the pace-making with her, but I was at my limit and barely hanging on. 4:09 for the second kilometre.

Kilometre 3: Nadine drew inexorably ahead, stretching the elastic band until it snapped with the finality of Sylvester Stallone dropping Michelle Joyner in Cliffhanger. I was all alone for the last two laps, running with urgency, hearing frequent encouragement from spectators for my pursuer Gary. I looked around briefly with 300 metres to run and could see that he was gaining. I ran down the back straight as hard as my lactic-filled legs would allow, before going into full sprint mode for the last 100 metres. I could hear Gary raising a similar effort, and I didn't feel 'safe' until 20 metres before the finish-line. 4:12 for the last kilometre for a pleasing 12:26.26. It had been a fun race! Interestingly, the sprint-finish off a fast pace produced the highest maximum heart-rate I've recorded in recent years (167) — I had thought my maximum was around 164 to 165.

Afterwards I was presented with a silver medal for placing 2nd in the M50s — a great memento for what had been a memorable race! 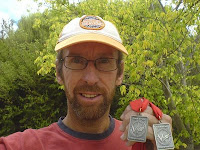 I ran in my first 3000 metre race for the year on Thursday evening. It was a Dog Day Evening — 33°C (91.4°F for Imperial readers). I'd spent the day working in higher temperatures, so was suffering an alleged "attitude problem" before the race even started.

I ran with restraint in the early stages, zeroing in on "slow Stromlo km repeat pace" — 4:10 for the first kilometre. Inexorably I drifted further behind the Katie/Geoff group, running a second kilometre that was more like 10k race-pace (4:28). With just over a lap to go, Bronwyn came flying past (on her way to a 15 second PB), so I chased with all my legs had (not much), finishing with a time of 13:00.05.

I'm fairly philosophical about the result. My hot weather racing has never been pretty. The effort was there, but the speed was absent. I should have a better idea of how I'm going when this heat-wave subsides. This morning I ran 5k at tempo effort on the lovely manicured grass at Stromlo which compared favourably to a similar session this time last year. Before the run I watched Australia's best distance runners racing for a place on the team for the World Cross Country Championships. Local runners Marty Dent and Emily Brichacek were inspirational, winning the senior men's and junior women's races. 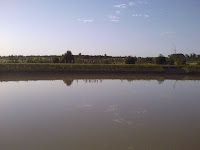 Stromlo's dam was more inviting than it's manicured grass this morning 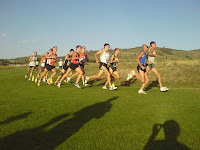 Collis Bermingham and Lee Troop lead after 2k with Marty Dent in 8th place
Posted by Ewen at 5:06 pm 17 comments:

This heat is starting to get to me. Canberra summers are supposed to be mild. If I wanted heat I'd move to Queensland! For the last few weeks, maximum temperatures have hovered in the mid-30s Celsius (95°F). Attempting to do quality training in those temperatures is no fun at all. As for racing any distance longer than 400 metres — forget it!

I must be going mad, as I find myself pining for a location-swap with up-over runners like Julie and Mike, who in a bleak northern winter are battling through snowy blizzards and slipping on icy footpaths.

Thanks all for your thoughts about my training plan. Bob from Tokyo suggested taking scheduled rest days (one per week) as a way to ward off injury. Now Bob's a very fast runner (1:23 for the half marathon at 60), who's also training for a sub-3 hour marathon. In the 80s I used to always take the Friday off before the weekly Saturday cross country club race. However when I started running 7 days per week, my times improved. Now as a 51-year-old runner, I try to listen to my body, and do take a day off if I feel I need it. I am inclined though to perhaps schedule Friday for very easy running of 4 to 6 kilometres, instead of the 12 to 14 I've been doing.

I hope everyone has a great week. Stay cool! 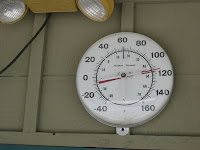