Do you remember the 4th of July?

Physically, I'm over my recent illness. I haven't run for 13 days. For me, this is a long break. I'm one of those runners who loses fitness quickly — four days off and I'm puffing on the warm-up run for the Speedygeese session at Parliament House. For this reason, I tend to run pretty much daily if possible.

The last time I had a significant break from running was in 2006. I ran sporadically during a 5-week holiday to America. On the 4th of July I ran from Old Town in San Diego through Presidio Park. That evening we rode the trolley down to the marina to watch the fireworks display over the harbour. The following afternoon I ran 5.5 kilometres and the next day we drove north on 101 to Los Angeles for the flight home. I didn't run for the next 9 days.

I'm happiest with my running when the training is ticking over with regularity. Runs build upon runs, sessions upon sessions and fitness for racing well seems to be there all the time. It's taken for granted. When this is happening I'm loathe to choose to stop running. Why stop? Looking at running as a lifetime activity, I think it's healthy to have one or two periods every year where one doesn't run. Of course, these periods would be choices, not stoppages due to injury or illness. I know many of the Kenyan elite runners, at the end of the competitive season, have a break of up to a month where they don't run a step. I want to be running when I'm 81 — not racing marathons mind you, just running! I think a planned break from running will make this long-term goal more likely. I've extended my rest due to illness into an "end-of-season" break. I think I'll run tomorrow. 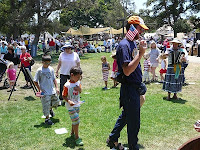 I have my number for the Melbourne Half on 10 October, but I won't be running. I'm sick. The doctor says it's a viral condition. If so, it's one tough virus! I started to feel a cold coming on four weeks ago, 21 August. Had 5 days off work, then started running again but wasn't 100% cured. Ran two weeks of 64 and 40 kilometres then started to feel crook again last Saturday. I've had the last four days off work — it looks like being a few more days (hopefully that's all) before I'm well enough to return to work.

This setback means I won't be racing the Melbourne Half. My preparation hadn't been great anyway, but I was looking forward to the run and mini holiday with my friends. Separately to the virus problem I've also had a couple of blood tests. I was curious to see if iron deficiency (rather than slogging through too many 10-hour work days) was a reason for my lethargy and lack of enthusiasm for training. Turns out my iron levels are okay, but I have Hypothyroidism — not all the symptoms mind you. The ones I have experienced are: fatigue and low energy levels, intolerance to cold temperatures, and fatigued and aching muscles. I'm on a daily 50ug dose of Thyroxine which will be monitored with future blood tests.

In the grand scheme of life, the universe and running, missing Melbourne is no big deal. It has made me think though, that we shouldn't take our health for granted. Running usually brings one good health, but one needs to be healthy to run! Stay healthy friends, and have a great week. 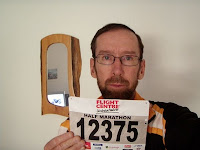 My Melbourne number. There's always next year!
Posted by Ewen at 4:15 pm 28 comments:

A hiding place where no one ever goes

I'm honoured to have been chosen to join Joe's dream road-relay team. It's probably beyond the bounds of cyber-friendship, but I'll ask my captain in advance if I can run the short and/or downhill legs. The requirement for hopping on board Joe's van was to answer an intriguing question: If you had the chance to go back and change one thing in your life, would you and what would it be? Before I answer the question, I'll offer six random readers the chance to ride in my van if they're brave enough to answer the same question. It takes a little manning-up to ride in a van that could be driving on the wrong side of the road. Let me know if you take on the challenge.

Now... changing one thing. Backwards time travel isn't possible, so I'm fortunate to be an optimist. I look forward to future possibilities. I might as well be creative with this question. My answer: I'd change my parents and I'd get a better (university) education. If I could choose my parents, I'd select Herb Elliott and Grete Waitz. A 15-year age gap, but possible. I'd have been born in 1975. That'd make me 35 years of age. I'd be in the twilight of my professional running career — preparing to race the marathon at the XIX Commonwealth Games in Delhi. With parents like Herb and Grete I'd have been blessed with talent for running. I've always wondered what it's like to run with talent. How much easier is it?

The better education part of my answer is because it's something I really do miss. I was intelligent enough to go to university, but at the time, had my mind set on doing something that didn't require such an education. A well-rounded education, even if it seemingly serves no practical purpose (besides giving one a qualification and a high-paying career), provides knowledge of life and the world. There are things one just doesn't learn from the school of hard knocks.
Posted by Ewen at 8:15 pm 23 comments: