Back to the border

My running is going nowhere fast. Before Easter I came down with a sore throat which turned into a bad cold. That's B.A.D. as in bad-assed dreadful. I haven't been feeling well enough to commence my new schedule of training. I said in my other blog that I was feeling "A little less sick than a dead dog lying in a ditch". These words are from 'Reason to Believe' - a Bruce Springsteen song...
Seen a man standin' over a dead dog lyin' by the highway in a ditch
He's lookin' down kinda puzzled pokin' that dog with a stick
Got his car door flung open he's standin' out on highway 31
Like if he stood there long enough that dog'd get up and run

There was no way I was going to get up and run! I had two days off work after Easter and I'm now taking things day by day. I think I'll be okay for the Nail Can Hill Run on May 7. This is a 'fun run' over a big hill in Albury, 350 kilometres from Canberra on the Victorian border. I found my finisher's certificate from the last time I did this run. It was 25 years ago! Needless to say, I don't expect to run a PB.
Posted by Ewen at 7:50 pm 21 comments:

My main running goal for the remainder of 2006 is to run 5000 metres in under 20 minutes. There will be other goals along the way such as running the SMH Half Marathon and keeping Tesso in sight during the City to Surf but the sub-20 5k is the main one.

Running diaries are useful tools but they can sometimes be deceiving. Last year after looking at old diaries I said in a club magazine editorial that I "run poorly off low weekly mileage". I should have said "I sometimes I run better off higher mileage". With my best 3000 metre times, some were run off a preparation of 50-70 kilometres per week and others off 90-100.

During winter I plan to train 'around' the 5000 metre event. I will do speedwork where I run faster than 4 minutes per kilometre pace, 2k or 3k time trials at goal pace and steady but not slow 'other' runs for up to 50 minutes. There will also be short cross country races. The 'Sunday long run' is missing but every second or third week I might do a 60-75 minute run just because I like long runs!

In future posts I'll outline my planned training in more detail. It will be a modification of Frank Horwill's schedules. I want to have this plan accommodate Geoff's Parliament House sessions and the Calwell group's winter training.
Posted by Ewen at 6:33 pm 12 comments:

Something happened yesterday which is more important to write about than my new training plan. It was the day of the Canberra Marathon and 50k Ultra. You couldn't have wished for a more spectacular and sparkling day to be enjoying the autumn sunshine. 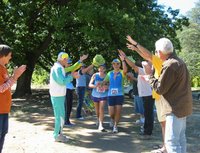 I wasn't running the marathon. This year I was happy to finish my long training with the Six Foot Track trail run. Norma was racing the 50k so I decided to run around to various parts of the course, taking photographs and offering encouragement.

Horrie was running with her. His main job was to control the autograph hunters, CoolRunning cheer-squads and paparazzi. He was also timing the running and walking parts of Norma's race. The basic plan was to alternate running for 22 to 23 minutes with walking for 3:40 to 4 minutes. 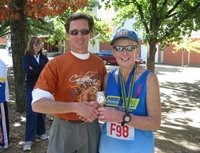 It's fine to have a plan but the success of any plan is in the hands of the athlete. Norma, with the guidance of Horrie, executed the plan to perfection. The plan said the finish would be reached in 6 hours 35 minutes. Norma ran 6:32:28 to set an Australian W75 record for 50 kilometres. It was also a PB by over 20 minutes.

It could have been just another run on any Sunday past the familiar cow paddocks east of Mittagong instead of the last chance to set this record. She'd completed another long run. It was a good one.
[My other photographs from the weekend are on CoolRunning]
Posted by Ewen at 4:28 pm 17 comments: 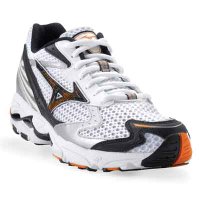 It's a beautiful cool and sunny morning. I was going to ride into town and watch the Women and Girls' Fun Run but I slept in. Is this a sign that I'm not getting enough sleep?

Today there's a race in Port Macquarie which I'll follow on the internet. It's an Ironman race and these things take as long as a working day plus overtime. There's also the World Cross Country Championships in Fukuoka to chase results for... Go Benita, go Craig and go Marty!

This week I indulged in a little retail therapy by purchasing some new shoes from Brian's shop – The Mizuno Wave® Rider™ 9. Okay, so they're not made of satin and don't give the high of chocolate but they're very comfortable. Not quite as slipper-like as the Frees but for a substantial trainer they're good.

I was in need of retail therapy because I'm still wallowing in that lull between finishing a big event and starting a program for the next one. There are a number of opportunities to achieve my next goal which is to run 5000 metres in under 20 minutes. Track racing doesn't commence again until October so I'll be running some short cross country races and fun runs before then.

I'll outline the program I plan to use to achieve this goal in my next post.
Posted by Ewen at 11:00 am 13 comments: