The second age of high motivation

I enjoyed a good run this afternoon — a run which showed I've finally improved from a plateau of fitness on which I've been stuck for the past six weeks. Nine kilometres out and back beside the 'Tuggeranong Creek' at MAF heart-rate (129) and an average pace of 5:25 per kilometre. So, 699 heart-beats per k — a number I haven't seen since before the hamstring injury in October last year. Exciting!

I'm extremely motivated to run well. I turn 57 this week, which is really "pushin' sixty" as Ken White would say. I don't feel that old! Early forties maybe. The last time I felt this motivated was in my early thirties. I'd been running since 23 and desperately wanted to run some lifetime PBs before I hit forty. I turned to Geoff Moore for coaching and trained with his small group a couple of times a week.

Below is a page from my 1990 training diary. The numbers seem incredible now, but they were pretty average for the group. I wasn't the fastest runner — that honour belonged to Geoff, who would push out 1k repeats in well under 3 minutes. I didn't run the most mileage — sub-3 hour marathoners such as Mary Silver would have been running 140 kilometres per week or more. My training was consistent and did result in lifetime PBs for all distances from 1500 metres to the half marathon. In 2014 my focus is on 'racing well' from 3k to 10k. Especially the 5k! I'd love to run 'a good' 5k and hope to do so this year! 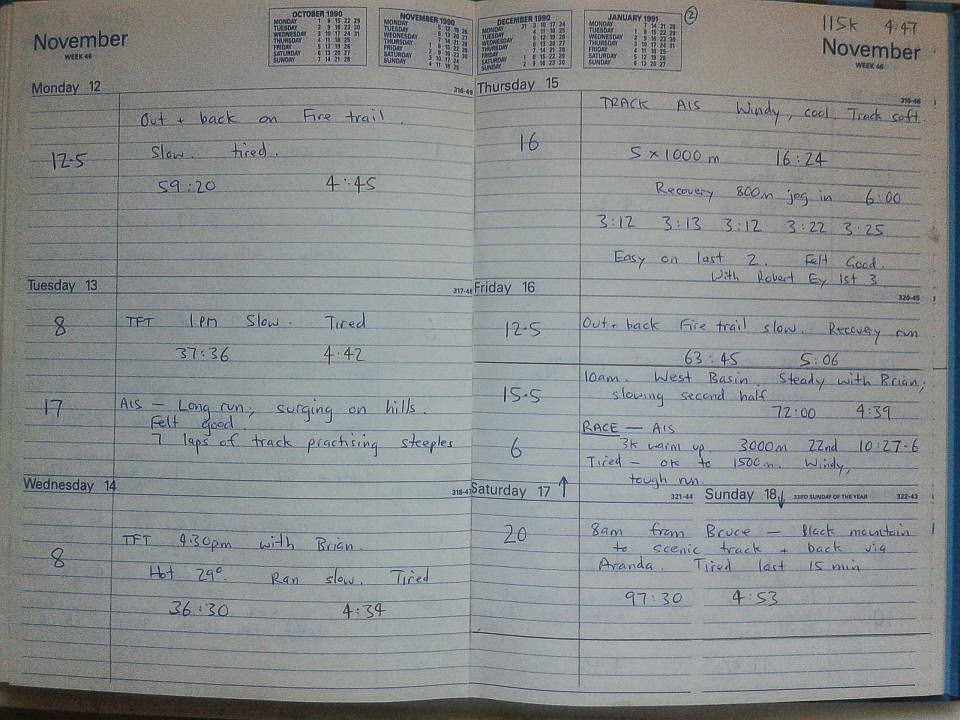 In the days before computers (and Garmins!) we used a paper diary to record our running.