I've just returned from a week of warm weather training in Queensland. The shorts and sandals attire was luxurious after experiencing late winter snow and freezing temperatures in Canberra. While I was in Hervey Bay I raced the Parkrun 5k (starting at the earlier time of 7.00 AM to beat the heat!). Happily, I ran a little faster than I have been recently — 23:44, finishing 34th in the field of 198 and 1st VM60-64. My fastest 5k of 2017 remains the 23:32 run at the Tuggeranong Parkrun in March. I was happier with the Hervey Bay result because expectations were low while warming up with ordinary feeling legs. I thought anything under 25 minutes would be a pass mark.

I lined up a little way back from the front and it was a few hundred metres before the crowd thinned out. Before the start some pacers were introduced, one being John Street to pace '24 minutes' (John's VM75-79 record is a very impressive 21:02). Around the 1k sign I caught up to John and his small group which included a couple of youngsters. My Garmin split afterwards showed 4:37 at 1k. I followed John's group to the turn with the pace feeling okay. After the turn a couple of runners went ahead so I chased them all the way to the finish. Remaining splits were 4:47, 4:45, 4:50 and 4:45 so it had been a fairly evenly run race. John finished in 23:54.

I'm still fine-tuning the Verheul Method of training. My legs seem to have changed physically — being happy running in the range of 4:00 to 4:40 per km pace for most of the short intervals. It's becoming natural to run at those speeds and steady running at my former 'general' running pace (5:45 to 6:00 per km) feels awkward. I think I'll experiment with a mid-week run of an hour or so of even paced running so a steady effort  remains as natural as reactive faster running. At the moment I'm walking my recoveries (rather than jogging). My thinking is that I don't want the legs to become 'confused' with what they're being trained to do — run lightly and reactively at 5k race pace.

What is the ideal distance for Verheul intervals? I'm liking 250 metres. Typically that distance takes me one minute, ten seconds to run (4:40/km pace), short enough that I can remain aerobic and concentrate on form and reactivity for the full distance of the interval while not so long that I become tired. It's very easy however, to dip into anaerobic energy stores when running 'fast' over such short distances. My natural inclination is to run on the fast side, closer to 4 minute km pace. I think for the Verheul Method to be effective the temptation to 'overspeed' needs to be avoided at all costs. Running a large volume of intervals tempers enthusiasm for speed but there's probably a 'just right' volume for each runner. Yesterday I ran 20 x 250m, which felt okay, but there's a danger of running tired and losing reactive form towards the latter stages of large volume interval sessions. I'll continue to experiment and let you know how things go. 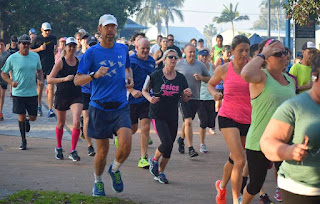 Shortly after the start of the Hervey Bay Parkrun 5k 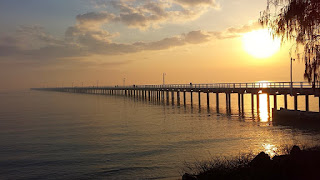 The 1k long Urangan Pier made a good warm-up location