I've raced four times since the Sydney Half: two 5ks, a mountain race and another 5k. In the second of the Parkrun 5k races I ran a fairly pleasing 23:25 (similar to my form early in the year). There's a rather long Youtube video (26 minutes) of the first Parkrun in which I can be seen in a yellow shirt after the turn.

I entered the AMRA One Peak Challenge race as a substitute for my weekly long run. The course was 12k and included some lovely familiar trails and an early climb to the summit of Mt Majura. My mate Jim was running so I thought I'd run along with him for a while and see how the race unfolded. Jim bolted at the start so I let him go and settled in for the hike up Majura. I caught him fairly easily once we turned onto the bitumen service road. My undoing after that was catching a glimpse of Leonie's alluring blue and lemon striped shorts in the far distance. She reached the downhill trail with about a 45-second lead. I charged after her like the man from Snowy River, "down the hillside at a racing pace, striking firelight from flying flint stones and never drawing the bridle till I landed at the bottom of that terrible descent."

After another 4k of desperate pursuit I finally drew abreast of Leonie on the 'easy' climb to the drink station (around 9k) and ran scared down the next steep descent. Especially fearful when I glanced back at an uphill turn and spotted her less than 100 metres behind. "Bloody hell — I'm going to have to keep running hard!" And I did, all the way to the finish at Mount Majura Vineyard. Victory (11th place actually) by a mere 31 seconds. A costly victory though — for the next four days my quads were too sore to run. I'm no Anton Krupicka when it comes to racing up and down mountains. Training on relatively flat trails isn't good preparation for mountain racing. 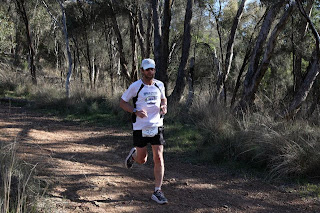