The field was disappointingly small, just 12 runners facing the starter. The air felt cool after recent hot days, around 19C, but there was a fresh northerly breeze to face as we ran up the back straight. I followed Roger around the first lap, the large Omega clock at the finish line showing 1:57, right on target. Quick enough, so I stayed in Roger's draft for the next 5 laps. Sensed he was slowing so went ahead. Bron shouted encouragement as we passed the lap-scorers each lap. My 5-minute k goal was gone by half distance, the unforgiving seconds slipping from under round minutes to over.

During the 17th circuit Ann lapped me and I used her as a pacer for the next few laps until the elastic broke. That was helpful in a race in which I was running alone most of the time. Finished in 7th place with a time of 50:33.28 and a gold medal for the M60s (only entrant!). I would have loved a 49:XX time, but perhaps that'll be the result next year. The story will be embellished in future reminiscences to say we faced a Queensland-style cyclone up the back straight which cost every runner at least 2 minutes. 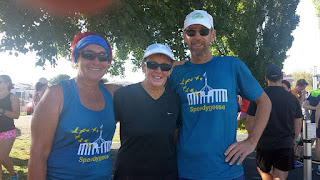 Catching up with Carolyne and the legendary Norma Wallett (38:34 for 5k at 88!) at the first Goulburn parkrun
Posted by Ewen at 3:23 pm 9 comments: