It's been a while! There wasn't much to report during the final two months of 2020. I was happy to be able to run consistently throughout the year, averaging 49 kilometres per week. My goal for the year was to break 25 minutes in a 5k race, so a fail there — my fastest 5k was back in July, 25:38 for the Runners Shop race.

For 2021 my goal remains the same, under 25 minutes for a 5k race. In my current form, that seems quite a difficult goal! The first test was at the RunACT Stromlo 5k Road Race, held last Saturday evening. The course was 5 laps of a 'AA-Certified' accurate 1k loop on the smooth bitumen of the criterium circuit. It was a relatively flat course, just a short rise into the U-turn at the northern end of the course.

I started out at what I estimated was 5-minute per km pace — my 'opposition' (Jimmy and Zoe), not far ahead. My first lap, in retrospect, was too fast for my fitness level, 4:57. I was already slowing, but still going fast enough to pass Jim and gradually catch Zoe. I moved ahead going into the third lap (5:09 for the second) but it was feeling hard already, far too early! There were around 65 runners in the race and there were a couple I slowly pulled in during the third lap (5:19). For the last two laps I tried to maintain pace but was getting slower, eventually crossing the line in 52nd (5:29 and 5:20) for a time of 26:14. A long way from 25 minutes, but I'm looking forward to the challenge of chipping away at that time during the course of 2021. I hope you are all well, and looking forward to more running events than were available last year. 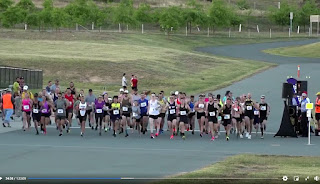 Start of the Community 5k race at Stromlo, myself in yellow, Jim in blue singlet