Dear readers, I'm sorry for not producing a blog post since the City to Surf back in August! I suffered a hamstring injury (strain) shortly after that race, I think due to a combination of running that event off inadequate training, and sprinting at the end of a handicap run in the week following City to Surf (inadequate recovery). I eventually rested from running during September, substituting brisk walking and cycling, then resumed running at the beginning of October.

My strategy for regaining fitness is to build mileage to 60 kilometres per week (or a little more), with adequate easy/rest days, and most of that running being low heart-rate (very easy, HR 125 or less for me), easy Verheul intervals, and short races (2k to 5k) being the only 'hard' running for the time being. My weekly mileage has progressed since the beginning of October: 23k, 29k, 31k, 33k, 41k, 50k and approximately 60k this past week. So far, so good! I hope you're all doing well and looking forward to good running and racing in 2020, year of the Tokyo Olympics! 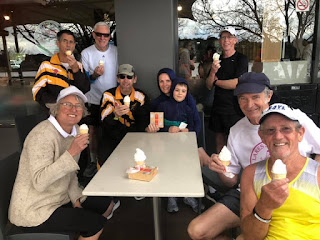 On Sunday I ran in my 35th City to Surf — it was the 49th running of Australia's biggest fun run. I had no goals or expectations for the run apart from enjoying it, not getting injured and recovering well from the effort. I wasn't expecting to 'run well' due to the missing long runs and hill training in my preparation. Since the Canberra Half Marathon in May my longest run has been 11 kilometres — weekly mileage has been 50-55 km, not enough to be at my best for racing 14 kilometres.

I travelled to Sydney with Jim on the Saturday and met up with Trevor and Roger on Sunday morning. Warm-up was a jog from the train station to the toilets then a little jogging in the 30 minutes remaining before the start. Trevor was in the 'Red' group (for sub-70 minute runners) and would run 67 minutes at age-67! Jim, Rog and myself were in the 'Green' group (2nd group to start, sub-90 minutes). We employed the same tactic as last year, starting near the back of the group and waiting as long as possible. This gave us a sparsely populated road for 3 kilometres which gradually filled as the race progressed — by 10 kilometres it became difficult to overtake runners.

I ran with Rog through the Kings Cross Tunnel then Edgecliffe and Rose Bay, passing 5k in 27:02. I was feeling pretty good at this early stage of the race. There were a few short walks on the steep corners going up Heartbreak Hill, that kilometre covered in 7:12. My legs and energy were still good and I was growing more confident about completing the race at the same effort. We were still overtaking runners with a few speedsters from the Blue group weaving past. Rog dropped back on the run to 10k, I passed that mark in 56:25. It's always a drag from 10k to 12k where the course finally drops away down to Bondi. I was happy to maintain position down the hill, still overtaking when possible. I caught up to Liz around the 13k mark, then we were on the 'flat' of Campbell Parade, the U-turn and the final gentle down slope before the last corner and 150m sprint to the finish.

My last 3 kilometres according to the Garmin were 4:58, 4:54 and 4:36. Finish time was 76:10 for 13,656th place out of 70,000+ finishers. Happy with that! I think this result shows that having no expectations prior to a race can be a good thing. I was happy with how I spread out my effort over the course, just running by feel. The weather had been good for running, less than 10 degrees and the blustery wind not a problem running in such a packed field. Roger finished in 77:05 and Jim in 86:18 to stay 'Green Group' qualified for 2020. See you there! 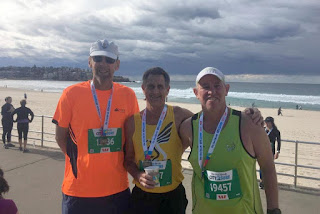 With Jim and Roger after running to Bondi Beach

There was a big fun run atmosphere for the MDC in spite of the cold (5 degrees C) and calm conditions. My mate Jim called me towards the first 'pen' of runners — we were only about 6 rows back from the front. Jim bolted at the gun and I spent the first 800m or so pegging him back. At about the same time the 25-minute pacer went past — 'Okay, this is good, I'll try and stick with this group' as we passed 1k in 4:58. The pacer opened up a gap of 20 metres as he ran over Kings Avenue Bridge. I ran hard on the down slope of the bridge and passed 2k in 10:04. I never caught the pacer but the small group I was with were overtaking runners who had started faster. My third kilometre was 5:01, then 5:03 over Commonwealth Avenue Bridge. I ran hard down the bridge and to the finish, 4:33 for the last kilometre but still not quite catching the pacer! I was very happy with my finish time, good enough to win the 60-69 age-group. Jim came in about 90 seconds later to win the 70-79s, a solid run and one of his better recent races.

Looking forward, I plan to continue racing regularly while maintaining mileage at 50 to 60 kilometres per week over winter. I'm feeling confident about improving the 24:36 5k time towards 24 minutes. I hope to run faster than 24 and will have a good idea if that's possible after a few more months. I hope everyone is enjoying their running — until next time, be well! 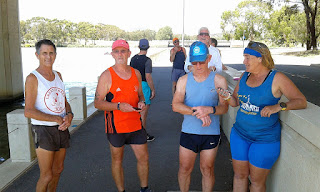 A long time away from running

I've been coughing and spluttering my way into the 2019 running year, much like a learner driver kangaroo-hopping down a suburban road, nervous clutch foot, a parent offering calm advice from the passenger seat of an ancient manual Holden.

A 20-day break in January was followed by a week's running, then another 33 days of zeros in the diary. The cause, a 'medical condition' which I'm confident is in the past. I'm up to 2 days of running in a row — yes! The details of those runs: 1k in 5:24 followed by 4k of easy walking at the Coombs Parkrun then on Sunday evening, 2k at 5:40 per km, puffing along with the expected high average heart-rate of 139 (my maximum is about 160).

My intention is to very gradually increase the daily distance over the coming weeks until I'm somewhere near a goal volume of 60 kilometres per week. My long-term racing goal for this year is to run 5k in a time yet to be determined, something 'respectable' — in the vague range of 22 to 24 minutes. I'll stick my neck out in due course, but even 25 minutes seems lofty when out of shape. I hope all readers are having a good 2019 so far — a shout-out to Mark, who recently ran a big marathon PB of 3:08, an excellent result, achieved with clever coaching from young Scott Brown. Until the next post, be well. 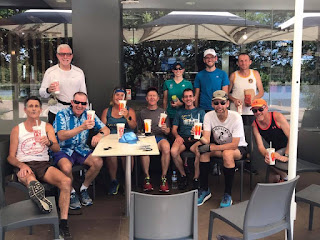