I guess this is a brief report into the status of my quest to run 5k in under 20 minutes. You're not going to get much! One of the things I've realised about distance running (after doing it for 30 years), is that improvement is usually slow. For me that is. You might be one of those runners who's blessed with fast improvement. I ran most of my personal-best times in 1991 — ten years after I started running.

What I'm trying to say is two things: Firstly, if you haven't been running long and think your race-times have plateaued, keep trying; and secondly, don't fight it. Do the training you think will produce the desired result and the times will come. Eventually. Consistency and patience count for a lot.

By tomorrow I'll have run 70 kilometres for the week (my biggest week since late July). I enjoyed my first interval session on the grass at Stromlo last Sunday — 3 x 1k in 4:34, and on Tuesday ran some continuous laps on the lush grass of the Calwell Track. I can tell that I'm not yet fit enough to race well (which I'd define as 22 minutes for 5k). I guess I'd run 24 minutes. I think I'll "race" the Cross Country Club 5k events on Tuesday afternoons (as tempo efforts) to ease my way back into the racing scene.
Posted by Ewen at 11:14 pm 15 comments:

I've been thinking about racing goals for next year. I should choose a goal that's exciting; on the edge of impossibility; one that I'd love to achieve. A fast marathon maybe? No, that's not my scene. I do believe in ideals, and my ideal race is not the marathon. OK then, here's the goal: I'm going to try and break 20 minutes for 5k. My history and progression indicates I'm likely to fail. Breaking 21:30 would be hard enough. Why set myself up for probable failure? I like the idea of the challenge; the likely long and arduous journey that will be set in motion by the goal of running under 20 minutes for 5 kilometres. I've never derived satisfaction from achieving soft goals. I'd rather fail at a difficult goal. There's also the good story I'll be able to tell at the end of the journey — a story surpassing any tall tale Scott Brown is able to tell.

On Tuesday night I was chatting to Gary at the Speedygeese dinner. He said something that has inspired me to try and run this hitherto considered impossible time. It so happened that back in July, Gary ran a six-year PB for 800 metres. 2:32 was quicker than any 800 metre race he'd run since 2004. What's more remarkable is that he's in the 60-64 age-group! I'll have to turn back the form-clock to 2001, but why can't that be possible? Getting on top of my thyroid problem is sure to help, as will shorter hours at work and "proper" 5k training. I also received further inspiration from an unlikely source — the description of an angry 5k race that resulted in a 19:51 finishing time. I need to get angry with my racing!

One consequence of my 5k racing goal is that I won't be running Six Foot next March — the training for a 45k race over mountains is too far removed from what's needed to run fast for twenty minutes. I should give myself at least 18 months to race under 20 for 5k. My training will involve putting together the puzzle-pieces talked about by Pete Magill in the April 2010 issue of Running Times. I'm not aiming for a particular race (although I'd like to run well at the ACT Championships in 2012). There will be many races, as I tend to improve with regular racing. There will also be breaks from racing, to recharge the batteries.

A measurement of fitness

In spite of not racing a half marathon in Melbourne today (or perhaps because of that fact), I'm feeling pretty good. Quite a few of my mates were running — you can check out their results in due course at Speedygeoff's. I ran 44 kilometres this past week, including a session of 200 metre repeats on the lush grass track at Calwell. As expected, these 200s were a bit of an eye-opener. They averaged 48.5 seconds (4:02 kilo pace), so pretty slow. The only other time I've run 200s this year was back in June and those averaged 45.3 seconds. I need to do more of this type of running.

Being a bit of a pedantic bastard, I've made a habit (regularly since 2006 and haphazardly before then) of recording my average heart-rate on regular (non-track-session) runs. I record my "average heart-beats per kilometre", for I believe this is a good measurement of aerobic fitness. I call this the "RS" number (for marathoner Robert Song who gave me the idea). On the 3rd of October I ran 10k at 866 heart-beats per km. Yesterday I ran the same course at 833 heart-beats per km, so that indicates a fitness improvement in one week. It's exciting how fast one improves after a lay-off! The faster one runs the more efficient one is, so running speed needs to be not too much at variance when using this test (and that goes for weather conditions too).

One thing I haven't done well in recent years is to match leg strength and speed to improving aerobic fitness. Having a comfortably low heart-rate is great, but it's even better to also have speed and strength in the legs. Short intervals, short hill repeats, and running drills are regular sessions I plan on doing to address this shortcoming. I hope all who raced on the weekend enjoyed it and ran well. I'll catch up with your blogs over the next day or two.

The above table shows that I'm "fit" when heart-beats per kilometre are 730 or better
Posted by Ewen at 7:48 pm 17 comments:

This past week I've gradually resumed running. On Monday, 5k with the Geese (Katherine dropped me at Kings Avenue Bridge on the 8k warm-up run — 5:44 kilometres was too much); Wednesday a very slow 9.5k with my mates, enjoying the lengthening daylight hours; Saturday, 6 x 500 metres with 58 second walking rests (these 500s were hard, slow); Sunday 10k on the flat in 60:34 at a heart-rate that's usually good for 53 minutes when fit.

I feel like I'm learning how to run again. Not exactly with a blank sheet of paper — more like a sheet of paper pencilled with a few numbers and doodles. I'm glad to have scrambled 75k in the past 4 weeks. I haven't lost it all. Whatever "all" happens to be. It's just so joyous to be running — breathing in the lovely temperatures and smells of Spring.

I know I have readers who'll soon be racing marathons or half marathons, perhaps in Melbourne or Chicago or New York. Enjoy the experience, run well, and have fun! Others of you have just raced — perhaps a 5k in Philly, a 10k in New York, a marathon in Zeeland or Toronto. Well done! Still others are injured and not running, or postponing races à la Ryan Hall. I have no idea how many people read this blog, but thanks to those who take the trouble to leave comments. They're quite encouraging (and at times entertaining). There could be readers who've run off course (as in a poorly marked fun run), ending up here at the end of a Google-search for "obsessive compulsive runners" or "good looking Aussie blokes" — to the latter girls I apologise — even my Mum doesn't think I'm deserving of a walk-up part on The Bachelorette. 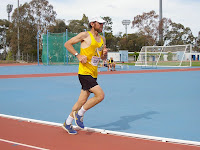