"That's impossible!" I hear you all shout. Well, it's not and it's actually pretty easy. The runner who most recently achieved 'the impossible' was not a 2:06 Kenyan who'd been running ten miles a week for six months. It was a 37-year-old Australian who placed 7th in the Adelaide Marathon last Sunday. Harley Vegan (who promotes the 'vegan high carb' diet) ran well under 3 hours with a time of 2:50:47. He was on 2:48 pace until 38k so lack of running training didn't cost him much time. His run training for 2014 amounted to 19.6k on average per week (actually 12 miles as he says in the video below). The video is a reply to a person who claimed a sub-3 marathon on ten miles a week couldn't be done in a comment on Harley's marathon race report video.


"I use cycling to build my cardio" says Harley. "I can't even do speedwork because I haven't got the [running] base!" Cycling is Harley's preferred sport and he's a very good cyclist. He cycles A LOT! He doesn't own a car or even have a driver's licence. On his Youtube Channel there's a video of Harley riding up the Corkscrew Hill in Adelaide and keeping pace with the Movistar Team professional riders. He has a high VO2Max and has built up impressive endurance from cycling. "My challenge with the marathon always comes down to leg fatigue — I do runs so the legs can withstand the impact and use heavy cushioned shoes [in the race]."

I must say that I'm excited by this video from Harley (and that's coming from a rare user of the 'f' word!). I'm adding cycling to my rather modest 50 kilometres or so of weekly running (I do like running and 16-19k a week just wouldn't do it for me). I predict that the cycling will enable me to maintain (or improve) my stamina over and above simple running. As Harley says, "Ego crushes potential. Always have an open mind [about different ways to train]."
Posted by Ewen at 9:32 pm 15 comments:

Last Sunday I found myself in a familiar and comfortable place. Yes, it was early in the race! I was running along the flat section at Rose Bay, approaching the 5k mark. This was my 30th Sydney City to Surf. Yes, I was just a boy when I ran my first. I glanced at my watch as I passed the marker (something I usually don't do when racing). 24:40 was 18 seconds more than last year's split. Sub-70 and a 'Red Group' qualifying time wasn't going to be easy. Last year I ran with desperation over the final kilometres to run 69:39 and already I was behind schedule.

Approaching the top of 'heartbreak hill' I had a déjà vu moment when I spotted Jenny Gilbert in the crowed, running strongly about 30 metres ahead. Jenny used to run with the Lane Cove Riverrunners when I lived in Sydney in the early '80s. We ran 10k in the park on Tuesdays, usually in less than 40 minutes. Jenny finished second in the '85 City to Surf in 50:17 (American Nancy Ditz won in 48:30). I bumped into Jenny earlier in the morning at the 'secret toilets' and she was typically reserved about discussing her plans for the race. "Same here" she said when I revealed my plan of trying to run 70 minutes. Here we were, amidst 80,000 others, running (almost) together again, just like the old days in the park.

I tried to increase my pace as we crested the hill. My mind was willing but my legs weren't! I soon lost sight of Jenny's pink singlet in the crowd. When we turned into Old South Head Road after 8k I found myself in survival mode. I was keeping up with some distincively attired people in the river of humanity, but most runners were moving ahead. The 10k clock said 51:41 (1:12 more than last year) so I knew sub-70 wasn't going to happen. I still raced as hard as possible and managed a modest sprint down Queen Elizabeth Drive to the finish. I'd run 71:52 — 5:08 per km pace (average heart-rate of 141 compared to the more desperate 144 of last year). Jenny had run 70:11 (!) with an official 'Heartbreak to Bondi' split 31:31, while mine showed a distinct lack of endurance at 32:43.

My lesson from this result is that a diet of mostly 6 to 8k flat runs and modest mileage (51k per week) is short of what's needed for a 'good' City to Surf. Not surprising, as the race record is held by a marathoner (Steve Moneghetti's 40:03 from 1991). Next year I'll aim to prepare more thoroughly. Until then, 5k racing here we come! 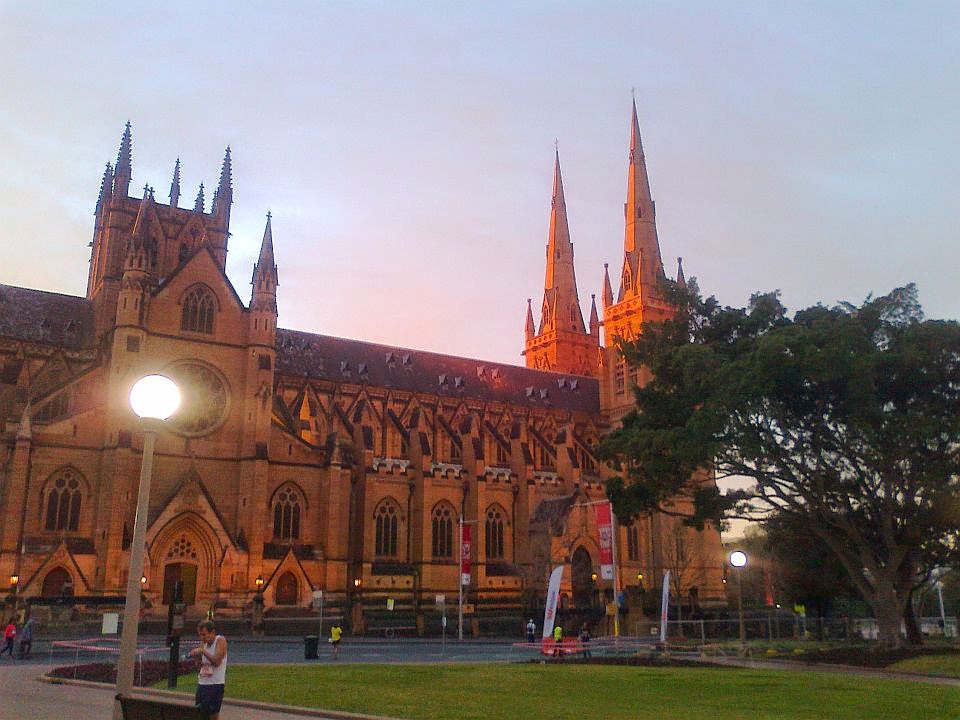 Staying with my mate Jim meant we were up excessively early ('to get a good spot at the start') for the 2014 City to Surf. Sparse crowd near St Mary's Cathedral.
Posted by Ewen at 6:15 pm 15 comments: