Base, Racing, and Training

Our winter continues to be mild — I run in the afternoons, enjoying distance runner friendly temperatures in the low teens Celsius (around 54°F). I continue to plug away with the Lydiard base phase, guided by Hadd heart-rates. I've just finished my 9th week of 96-ish kilometres (that's 60 miles for my metric-challenged readers). Hardly huge miles, but I'm not a fast runner — if I were, I'd be covering 125 clicks (78 miles) in the same time.

In Hadd for Ancients, my plan was to switch to the next phase of training after six to eight weeks of base. Now I'm not so sure. I feel there's still some improvement to come from running slowly. I've been fairly good at sticking with my plan of including upper aerobic runs and occasional short sprints during the base phase in order to keep the fast-twitch muscle fibres "awake".

Some of these upper aerobic runs have been races. Now; this has been interesting! I wasn't expecting age-PBs in these events, so it's been surprising to have more good races than bad:

I've also completed my first 'Evaluation Run' — made famous by Mystery Coach. I'll do these in lieu of the Hadd 2400m test due to the simplicity. My method for the Evaluation Run is to run a 2.5k warm-up, followed by some light drills and strides. Then I run 2 laps in lane 6 at Calwell (a 400m grass track) to gradually raise the heart-rate up to 83% of maximum (138 for me). I then hold a steady HR of 138 for a further 20 laps of lane 6, recording splits for each 4 laps. If my aerobic condition improves over the next few weeks, I should run faster at the same heart-rate. Results for 17 June: 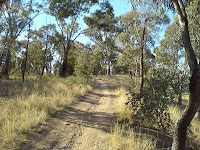 4 kilometres from home on my Rose Cottage Inn course
Posted by Ewen at 2:22 pm 20 comments:

Ewen and the Real Susan

I've been memed by Susan! "Who's Susan?" I hear my millions of readers asking. Well, she's an all-real skateboard punk rocker from the second largest state in the union — Texas!

On my next visit up-over, I'd like to go for a run with Susan. Then I'd be able to call her my running mate (a description Barack will never use for Hillary). I'd also have a beer with Susan (whilst she sipped Aussie wine), and sing this song (in the key of Scott Brown) — adding a verse for Susan, meaning I'd need a word that rhymes with "Suze". I'm supposed to spread the meme by tagging five friends. Susan, I was always hopelessly slow at playing tag — and I haven't got five friends! These days the only runner I can catch is Strewth, so I'll tag her. If you're a reader who thinks I can catch you, consider yourself tagged. Now for the Q and A section:

1. How would you describe your running 10 years ago?
I was running less, but I was faster. Sad, but true. In 1998 I ran 40k per week, but youth was (lingering) on my side. I ran a 10k fun run with one of the girls from Calwell in 41:09. I was lucky enough to run in Oregon — what a spectacularly beautiful part of the world! I also dabbled in triathlons. I was a useless triathlete due to my brick-like swimming.

2. What is your best and worst run/race experience?
The best was in 1991 — breaking 11 minutes for the 3000m Steeplechase (10:51.3), when seven years earlier I honestly thought a time that fast was impossible. Oh, and not falling over, like poor Harry. The worst would be clobbering my knee against a steeplechase hurdle and hitting the deck, which put me out of action for three weeks.

3. Why do you run?
It's fun! Oh, and the friendships one makes (that includes you)! One friend (and rival) is Jim. That's him in the photo below — running with childlike abandon, racing a girl whose older sister has run for Australia. He always races "all-out", so a victory against Jim is well earned.

4. What is the best or worst piece of advice you've been given about running?
The best was: "Find a good coach, race short distances and train on a grass track".

5. Tell us something surprising about yourself that not many people would know.
I'm very unsurprising. Sorry, that's something you all know. Very well — I placed 2nd in the Moth Class in the 1972-73 Riverina Sailing Championships.

Jim sprints with childlike abandon to the finish of a cross country race
Posted by Ewen at 8:26 am 17 comments:

I've been waiting to tell you about a race that happened two Sundays ago. It was an amazing race. 1500 metres on the track. Even my up-over readers would know how far that is — the metric mile. One-and-a-half kilometres.

The race was one event in the first of the High Noon meetings to be held at the AIS track over winter. It was an "all-comers" meeting. The weather was all-perfect — 16°C (61°F), sunny, just the occasional zephyr ruffling the windsock near the long jump runway.

A field of 23 runners and 2 race-walkers crowded the curved starting line. Our ages ranged from under 10 to 60; boys and girls, all anticipating the excitement and tactics that 1500 metre racing provides. At the crack of the gun we charged off, aiming for the same bit of Mondo 100 metres away. I thought I'd started with blinding speed, but looked around after 50 metres and thought 'wow, I'm last!'. Why couldn't I run with childlike abandon? Why was my central governor set permanently in slow motion? It didn't matter. I was racing. I was having fun!

Around the top curve and some of the littlies started to slow. I picked my way around them — at times contemplating testing my steeplechase hurdle technique. Speedygeoff was just ahead, but he pulled inexorably away. The Seiko showed 1:04 at 300 metres. I didn't get any other splits — I just chased the one other person in the race who was on the ancient side of thirty and within reach. I caught him with a lap to go, then increased the pressure trying to bridge the gap to Emi. Youth prevailed by 3 seconds. I finished 13th — incredibly pleased (and surprised) with my time — 5:38.49. This was an M50 PB, but what gives me hope for the future is that it was "out of the blue" and run off endurance training. When I introduce interval training, theory has it that I should become faster. 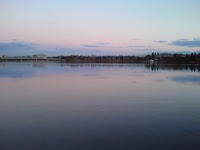 Calm conditions are good for racing — as we have here on Lake Burley Griffin in this view of the National Library from the National Museum
Posted by Ewen at 5:03 am 24 comments: