I like racing. Especially the one-on-one kind of racing, rather than the 'run fast in a big field trying for a good time' kind of racing. This post is a catch-up on what I've been up to over the past month.

1. The ACT Duathlon Championships (10k run, 40k bike, 5k run)
Held on the September 27 — prior to the event I felt daunted by the prospect of racing hard for such a long time (over two and a half hours). My pre-race plan was to spread out my effort/energy over this amount of time and the plan worked well. For the first 10k run I allowed the fast-starting Bron to get away then gradually pegged her back, not quite catching her before transition. 46:14 for the run (yes, it was around 400 metres short). Passed Bron early on the bike leg, riding hard with the aim of time-trialing to a good time. 1:24:51 for the ride (around 28 kph). My legs felt awful for the first 500 metres of the 5k run, but gradually came good — 26:23 and very happy to see the finish arch. Final place was 72nd out of 96 in 2:39:28, around 9 minutes ahead of Bron. A fast bike makes a big difference!

3. Greater Goulburn 10k Fun Run
Held the next day, October 4. Drove up early in the morning with my mate Jim. We enjoyed a really friendly, well-organised country fun run. The course had two hills, one gnarly trail climb with steps and a shorter steep trail hill. I ran with the aim of having a good hard training run and trying to beat Jim if possible. He started fast; I gradually made ground on the first climb before overtaking on the steep road descent to the start of the second climb. Ended up finishing comfortably ahead — 53:59 to 55:51. Good average heart rate too — 130. Woohoo! The race was won by Marty Dent (32:31) and young Steph Torley (43:07).

4. Run with the Wind 10k
Held on October 11. Fantastic event! Beautiful views and a challenging (hilly) course with the magnificent wind turbines looking over us. Drove up with Jim, Maria, Suzanne and Fran. Once again I wanted a hard training run (got that!) and ran with the aim of finishing ahead of Jim. The course was held on the excellent gravel access roads of the Windlawn Wind Farm. We started down a long gentle hill — Jim got away even though my first (easy feeling) k split had been 4:43. I caught him on the return run as we climbed 84 metres to the first turbine. Then it was one hill after another and windy! Funny, that. I had to make an effort to run down one hill such was the wind. I could see Liz's running skirt in the distance but it never got any closer. Finally we were at the last turbine and the downhill run for home (10th k in 4:32). Liz ran 53:34 to win the 50-59 age-group. My time was 54:34, with Jim finishing 4th 60-69 in 59:43. My friend Rachel finished 3rd female and described the race as 'the hilliest 10k ever!' — she ran 45:04 and is a 2:49 marathoner. Hubby Joel placed 3rd in the earlier 5k in 19:35 and thanks to Joel's description of the 'brutal' course, I got my pacing effort pretty spot-on.

My next race is the Melbourne 10k on Sunday — not sure whether I'll continue to race well or be all worn out from all that racing. Anyway, it's all good fun. Looking forward to it! 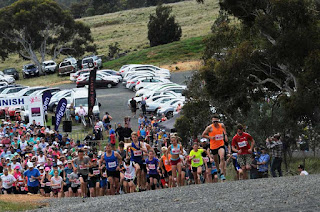 5k race start (thanks John Harding for the photos) 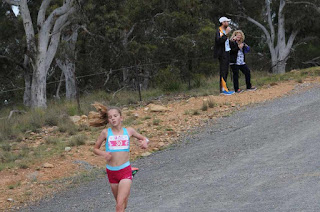 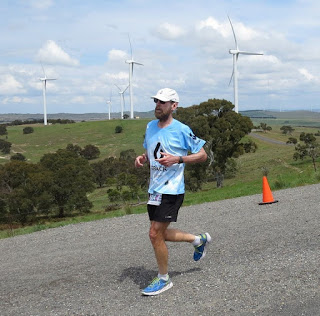 Running with the wind and against the wind. Did I tell you it was windy?!
Posted by Ewen at 11:04 am 11 comments: