I'm back in Canberra following a brief holiday in my old home town of Wagga Wagga (the city so beautiful they had to name it twice). While I was there I lashed out (over $200) and bought a pair of Hoka One One Bondi B shoes. I've been wanting to try a pair of these after reading many online reviews (including this one from Peter Larson), and hearing good reports from friends. Amazingly, these shoes aren't sold in Canberra!

I've only run in them twice: on my relatively flat, lakeside bikepath course in Wagga and in yesterday's hilly off-road Bush Capital 16k. The first run in Wagga was a revelation. I couldn't believe how soft the Hokas made running on concrete feel. It's the first time I've not sought out the softer dirt verge while running on a bike-path. I'd run the same course two days prior in my Nike Frees at a heart-beats per km cost of 697 (very good for me on that course). In the Hokas that number was a slightly inferior 717, however I had run a hilly 15k the previous day and on the day I wore the Hokas I was pushing into a headwind for the second 5k (it had been calm when I ran in the Frees).

My Hoka Bondi Bs weigh 392 grams (size US13), while my Free 5.0s are 310 grams. The extra weight of the Hokas isn't that noticeable (apparently the Hoka Bondi Speed is lighter). My Saucony Kinvaras are 246 grams and are a great racing shoe. The Hokas have a 4.5mm heel-toe drop, so similar to the 4mm of the Kinvaras. While I was running in them I didn't feel like my form or movement was different to when using any of my other shoes. I was happy to 'land hard', both on the flats and downhills due to the ample cushioning, so perhaps muscular elastic recoil was cancelling out the softness of what you'd think would be an energy absorbing shoe.

I enjoyed the Bush Capital 16k yesterday. I ran the first uphill easily (as can be seen by the splits), with Leonie way off in the distance. Once on the flatter parts of the trail I worked on slowly bridging that gap. I was about to catch her just after 5k when she stepped off the trail for an unscheduled pit-stop. After that I ran with various runners, to-and-fro depending on the trail's gradient (I was slow on the ups). Legendary local veteran Trevor Jacobs jogged past on the climb to near the grave of Trent North as I walked. On the smooth part of the downhill I got back 'in the lead' with a 4:38 km split. I was running next to a girl in a purple singlet at this stage — our pace/energy levels being very similar. We ran the next 4 kilometres together until the final (downhill) one. I sprinted off, with the target of Lucia (pigtail flying) up ahead. Passed her just before the gate, only to have Trevor surge past me just afterwards (bastard!). To add salt to the wounds, the girl in purple had the audacity to out-kick me! The Hokas worked well (and I'm not stiff walking around this morning, a good sign they may help recovery). My time was slightly slower than last year — 1:28:13 vrs 1:26:14, however we had headwinds to contend with this year and the ground was softer after recent rains. My average heart-rate was 140 this year and 139 last year. I think the Hokas will help my pavement sensitive legs do the long runs needed for half-marathon training (while helping recovery). I'll let you know.

My km splits & profile of the Bush Capital 16k 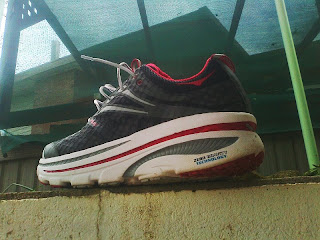 Hoka One One Bondi B improves my view 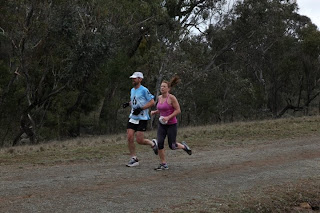 Hokas decide it's time to fly, running a 4:38 11th k next to the girl with the purple singlet

Even though my last PB was two decades ago I relived that euphoric feeling just last Friday. I rowed a 2000 metre PB on the Concept2 erg — 8:05.5, just over 10 seconds faster than my previous best. I was excited! This was a 'lifetime PB', not an age-group one. Achieving something you never have before is, well, different. When indoor rowing you're looking at a 'speedo' with various readings, one of which is a constantly changing estimated finish time. Half way through the row this pesky number had dropped back to 8:12, so I was very pleased to finish fast and log a number close to my sub-8-minute goal.

My running is also going well. All training runs are steady MAF efforts (HR under 130 for me) and last Monday Cathy dragged me around the Speedygeese 8k warm-up course at 5:32 per k (ave HR 126). This compares well with runs I was doing prior to last year's City to Surf, so I'm happy about that. I raced an 8k cross country event on Saturday and felt good. The distance was about 400m short so 39:20 works out at 5:11 per k on a rough course and my heart was doing it pretty easy at an average of 139. I have one major 'tune-up' race prior to the City to Surf — the Bush Capital 16k. That's the big test to see how easy or hard a sub-70 C2S will be on August 11. 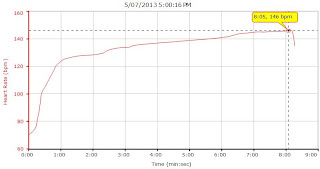 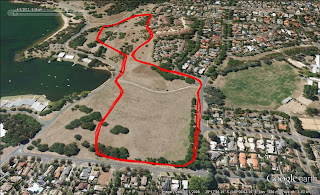