I cried. Twice. Watching Kerryn McCann winning the Commonwealth Games Marathon yesterday had me with tears running down my cheeks. Her battle with the young Kenyan runner Hellen Koskei over the final 4 kilometres was brilliantly captured by the television cameras.

The second occasion was that afternoon when Steve Moneghetti presented Kerryn with her gold medal and they hugged for a long time.

I remember reading about Kerryn in Fun Runner magazine in the early 1980s. She was yet another promising junior runner. In September 1986 I ran with her for many kilometres in the Mercury Tooheys Wollongong Half Marathon. At the age of 18 she won the race in 82:54. Twenty years later, she has won a race that will be remembered for a very long time. A race that will define her career and also define the essence of what it means to win on guts and emotion.

I've been feeling a bit flat since the Six Foot Track. You train for a big event for months and suddenly it's over. The Canberra Marathon is on in less than three weeks. Norma has been battling an injury but, thankfully, it looks like she'll make the starting line. What happens after the gun is a mystery. I hope it's a mystery with a happy ending. I think I can cope with happy emotions.

Where the bloody hell was I?

I thought about subtitling this story 'A slow and lingering death out on the Black Range'. Unfortunately the photo Plu took shows me appearing to be out for a relaxing Saturday afternoon jog. In reality, I put on an Oscar-winning performance for the short run past his lens. 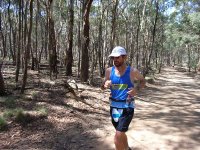 This was my third 'race' of the 45km Six Foot Track. There was also the non-race 'Slow Version' last November. On Saturday morning I was feeling quite excited about the coming day. Breakfast at the Youth Hostel with the rest of Gramp's Army was a great beginning although my two muffins and honey seemed woefully inadequate after seeing race-winner Emma Murray tucking into a big bowl of muesli and bananas.

I think my day was locked into a slow spiral of death with a snap decision. This was very strange as snap decisions are not my forte. I lined up in the middle of the third wave of runners with Elizabeth and Chris. We made quite a bit of forward progress before the steps and only had to queue up for about 15 seconds before commencing the descent of Nellies Glen.

I started to get excited when we reached the fire trail in 20:19 (about 10 minutes quicker than my two previous runs). Elizabeth and Chris were running at a good pace and I made my snap decision to stay with them. It was three hours later when I realised my folly. Our sub-5 minute km pace had us passing many runners including a chap from the 'B' wave which had started 15 minutes earlier!

Our focus was such that we pursued a large group of runners 'up the garden path' into a property rather than turning right and following the 6 foot track signs. A couple of runners up ahead stopped and surveyed the scene explorer-style, both with one had pointed and the other scratching their heads. Soon, they jumped the fence and bolted across the paddock. I followed as did the rest of the sheep and soon we were back on the right track after a 300 metre detour. This got the adrenaline going and I raced the single-track down to the Cox's River with some purpose.

After wading through the cool water I very soon made a second snap decision... I'd walk the uphills. I mean, most people were using this technique. Notable exceptions were Elizabeth, and later on the Pluviometer, Mike W. My split at the river had been 1:40:42. As this was 30 minutes faster than last year I was confident about finishing in under 6 hours. My PB was (and still is) 6:18:10.

The 4km ascent of the Mini Mini hill went well at about 11 minute kilometre pace. I ran down to Alum Creek still with quite a crowd of runners in view ahead and behind. I splashed through the small creeks and began the next 4km climb to the Pluviometer. This was getting difficult! Near the top, Mike W joined me for a while before running on ahead. I crossed the Pluvi timing mats in 3:35:28, still 29 minutes quicker than last year. I still thought sub-6 was possible. That thought was soon shaken out of my blood-starved brain on the stony trail of the Black Range.

I walked much more of the Black Range than last year and soon realised even a PB was out of the question. When James M caught me at the Deviation I was calculating whether I could make it to the Jenolan Caves as an official (sub-7 hour) finisher. At this stage it was all I could do to keep walking. The few times I tried jogging were a bit wobbly so I put that thought aside. I didn't want to fall over!

I lost count of the number of runners who went past after Caves Road. One of these was Chris who was ridiculously cheerful. At long last, the trail tilted down for the final time. I managed a slow run for the last few hundred metres. It was great when the announcer, Belinda, called my name plus I heard a few other yells of "Go Ewen", "Go Wombat" and "Where the bloody hell were you?" from the crowd. My finishing time was 6hrs 56:09. I placed 675th. There were 696 sub-7 hour finishers and 718 from 757 starters who made it to From Katoomba to Jenolan Caves.
Posted by Ewen at 8:19 pm 15 comments:

I gave the track & field meeting a miss tonight. My enthusiasm for the track has been on the wane since the bad 1500 metre race a month ago. Instead I rode the mountain bike down to Calwell and just did a warm-up and warm-down run plus some drills. I'm very keen to commence a new training program after the Six Foot Track.

Yesterday I decided to try one of the sessions from this program - aerobic repetitions at 10k race pace. I remembered that Jim often used the bike path next to the floodway for fast running. I didn't want slow numbers and this would be easier than running long repeats on the grass of Calwell. The plan was to do 3 x 2000 metres with an 800 metre jog recovery. I thought three would be a good number of hard efforts to get the feel of this session as I've rarely done repeats longer than 1000 metres. I set the Forerunner GPS to measure the distances.

For the first half, the session went quite well although try as I might, I couldn't get my 'current pace' faster than 4:30/km. The first mainly downhill 2km was completed in 9:12 - not bad I thought. I jogged slowly for 800 metres then took off again turning back near Monash after about 1400 metres. The second 2km took 9:11. After another even slower 800 jog I took off near the bridge for the last repeat. I was running slightly uphill, but worse than that, I was into a bloody headwind! The third 2km seemed to take forever, and it did - 10:00.

I jogged home thinking this had been a good reaquaintance with faster running. I'd managed to cover 6km at 4:44 per kilometre. Not quite 10k race pace but at least I'd made my legs move faster than they normally would on a Wednesday run. The plan is taking shape!
Posted by Ewen at 8:47 pm 14 comments: