Waking up each morning to the same predictable and annoying routine. I can't run! My calf injury refuses to give up. Persistent bastard! The gradual comeback to running that I mentioned previously lasted eight days. I noticed a soreness developing after 2k of the BBQ Stakes run on 4 May so walked to the finish. After two days off I ran in the Batemans Bay Parkrun, starting out feeling hopeful. I ran smoothly with kilometres of 5:20 and 5:19 (no pain at all), then suddenly, a sharp pain in the left calf! I stopped running and walked gingerly to the finish.

I've now had fourteen days off running (the calf feels totally normal on waking and when walking). My cycling training continues to go well. So thankful for that! I rode in my 4th cyclo-cross race last Saturday and had a heap of fun. This time I was pleased the course didn't require any running at all (I walked my bike up the one set of steps). The Youtube video below shows my race. Started last in the field of 19 and maybe finished 15th (the results aren't up yet).

The only running race I've entered is the Sydney City to Surf on 14 August. That gives me ten weeks to resume running and be fit enough to cover 14k. My plan is for a further 3 weeks off running (making 5 in total) then 3 weeks to build up to continuous runs of 10k. That should be enough. Marathoners rarely run the race distance in training, do they? And I don't have a wall to hit during a 14k race, do I? So all good!

Heart rate graph from my cyclocross race mirrors the hill on the course. Interestingly, average heart rate is similar to my 5k races yet my cycling training is typically between heart rates of 100 and 120.

Sven and the Art of Cycling for Maintenance

I commenced an ever so gradual return to running with the Tuggeranong Parkrun on Saturday. I walked the first half then alternated roughly 100 metres of running with 100 metres of walking for the second 2.5k. My time was 38:11, with the run/walk section at around 7 minutes per kilometre. The calf was good, so touch wood that continues to be the case. It's been 43 days since the original tear/strain which has included two aborted comebacks.

The popular (and sensible in my view) thing to do when injured is to cross-train by doing some other aerobic activity. This can be walking, cycling, swimming, deep-water running or training on an elliptical machine to name the more popular forms of cross-training for running. My choice has been cycling combined with a couple of days a week of brisk walking. I've been riding around 220 kilometres per week (90 minutes to 2 hours per day or more). Long rides have been for 4 or 5 hours. All this cycling leaves me feeling very fit aerobically — my resting heart rate is as low as it's ever been in recent years. My legs are good and strong too. For cycling.

I'm close to becoming a cyclist who can run, but not that well. Running is a very specific discipline of movement. And within running there is sharp specificity at different race distances. Sprinters don't do that well at marathons and marathoners don't do that well in mile or 800 metre races. Triathletes are good at swimming, cycling and running because they spend a lot of time training for each of the three activities.

The recently retired Sven Nys is regarded as one of the greatest cyclo-cross racers of all time. Cyclo-cross is a sport in which you race a bike for around an hour over often muddy, hilly and sandy circuits while running the sections that are impossible to ride. Sven's aerobic capacity would be the equal of a runner capable of competing well at the World Cross Country Championships. His running ability in hard-soled cycling shoes (while carrying 8 kgs of bike) was the skill that often made the difference in World Cup races. He's a good runner! And he now runs 'for fun' — in the Antwerp 10 Miles race on 17 April, Sven ran the good but not remarkable time of 61:53 (around 3:50 per k). I'm sure, given 12 months of specific running training, he could take 5 minutes or more off that time. If you want to run well, you need to run. Simple! 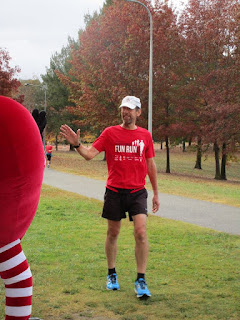 Walking to the finish of the Tuggers Parkrun on Saturday

Heart rate during a steady 41k bike ride. Average of 105. There's lots of coasting when cycling (unless you're riding a time trial on a flat or uphill course).
Posted by Ewen at 7:20 pm 9 comments: