Stopped from running by a calf injury

After my last blog in early March I resumed my return to running fitness back in Canberra. For two weeks I was going well and in hindsight, a little overconfident, as I decided to race the ACT Veterans' 5000 metre track championship race on Thursday 17 March. I knew I wasn't nearly as fit as I'd been for the 2015 race but hoped to enjoy competing and perhaps run around 24 minutes. I started well enough, running 4:45 for the first k and having Angel M for company towards the tail of the 16 runner field.

It was a warm breezy evening and soon after three laps Angel went by and it was all I could do to follow him. The next ks were 4:58, 5:08 and 5:15 (not the type of splits you'd hope for in a good 5000 metre race). With two laps to go my left calf felt like it was cramping — had I not been so close to the finish of my last 5k track race for the season I would have stopped running. The leg was hurting! I finished the race (25:13 and 15th place) and took the next day off running, hoping to cure what I thought was a minor strain. Wrong! I made it 2k into Saturday's Parkrun before the calf "cramped" again and I had to walk.

I had eight days off running (I could still ride my bike) before resuming run training with an 8k run in Wagga. I made it through that run with minor discomfort from the calf but 6k into my run the following day it "cramped" again, just as it had done in the Parkrun. I suspect the initial injury had been a tear of a muscle or muscles in the calf which just hadn't repaired itself sufficiently to resume running. I've now had a further six days off and I can tell that the injury is slowly improving day by day. I'll wait until the dodgy calf feels exactly the same as the good one and can stand some vigorous massaging before resuming running. I hope you're all doing better than I am as the weather (in Australia at least) is now perfect for running. 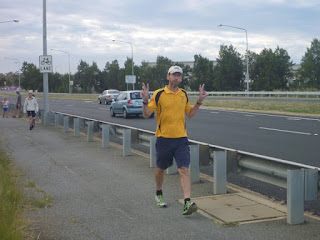 Walking the Ginninderra Parkrun on Saturday 2 April. My cyclist self thinks running is a slow method of getting places, but walking takes forever!
Posted by Ewen at 1:57 pm 11 comments: