Sliding Doors is a movie I remember seeing on a flight to Canada in '98 with friends Gordon and Maggie. It's about the life of Helen (Gwyneth Paltrow) and follows her through two parallel universes after she's fired from her job. The movie made me think about what might happen to my life if I opened a different door; followed an unfamiliar trail; was active instead of passive; became a 'yes man' instead of a 'no man'.

What has all this philosophising got to do with running? On Thursday I was set to race 1500 metres on the track. The previous day I felt confident of running a season's best. Maybe sub-5:50 if all went well. I did a slow warm-up jog and all the while my legs were saying "We don't want to be here! We feel second-hand and sluggish!" I listened to my argumentative legs and decided to miss the 1500. I'd take lap splits for some of the Speedygeese and jog 4 or 5 k for an easy running day. I had also arranged to lap-score for a friend in the annual one hour race. Fifteen minutes prior to the start my friend still hadn't arrived, so I said 'what the heck', and decided to run the one hour race myself for 'training kilometres'.

I felt tired warming up, so decided to practise running as evenly as possible. I didn't want to hit the wall in the 4th kilo due to an early attack of the 'Steve Prefontaines' (I was going to say 'Scott Browns', but Scott is now the master of even-paced running). My tactic was successful, but perhaps detrimental to a faster final time. After the first 200 metres, I detached myself from the runners ahead (Jim, Bronwyn, Thea and Janene) as I felt they were running too fast. I ran the next 8 laps about 30 metres behind this group. In still conditions this would have been fine, but there was a noticeable headwind in the home straight. Nobody to draft behind — not that I like doing that, but I'd have been happy to share the work into the wind. My km splits were 4:22, 4:19, 4:21, 4:27 and 4:21.

I said in my last blog post that I'd start trying longer Saturday runs to see if I might enjoy training for a marathon. Bugger that! Something is whispering to me, so I'm listening. I'm excited — just haven't decided which marathon to target. Greg reckons my 5k on Thursday is worth 3:32:51 for the marathon. What would he know?! I've never been the best at converting 5k times, but if I follow a good training plan I know there's room for improvement!
Posted by Ewen at 6:09 pm 34 comments:

Joe Garland recently described, with particular eloquence, a conversation he had with himself while on a cold Walkman-less run. It was about the siren call of the marathon. Particularly the New York Marathon, and the magic of 'being carried by the crowd through Brooklyn'. It was about wanting to race 5Ks, 10Ks, half-marathons, and the fear of 'failing' at the marathon. It was about possibly not having the genetic gifts of a born marathoner.

Joe's conversation is similar to an on-and-off one I've been having with myself since my second marathon in June, 1981. That marathon was 3:28:28 — a 13 minute PB and sub-8-minute mile pace (I used miles and kilometres back then). I wouldn't finish another marathon until 1992. You see, 42.195 kilometres has never been my favourite race distance — but I've been thinking lately that I might run another marathon. My last was in 2005 — a very unsatisfactory 4:37.

With this scary thought in mind, I've decided to allow my Saturday long runs with the Molonglo group to gradually lengthen. Yesterday we ran 24 kilometres — starting in relative coolness, and finishing in uncomfortable warmth under an azure blue sky. At times I ran with Michelle (3:31:09 last year in Auckland). She was too fast, but graciously ran with us at the start, and stopped at the Mount Ainslie saddle for the group to catch up. If these Saturday runs get out to 30k, I'll ponder more seriously the prospect of a marathon. Perhaps at the Gold Coast in July, or Melbourne in October. I'd only start if I thought I was capable of a 'respectable' time. I'll define that for myself as 3:40, or on a dream day, a Boston Qualifying 3:35. My racing plans in the meantime, are at the track — trying to improve at 1500 and 3000 metres. 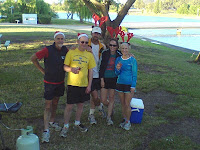 December BBQ with the Wednesday afternoon runners — Richard, Andy, Jen and Ruth. Chris was the honorary photographer
Posted by Ewen at 2:44 pm 35 comments: