It's Been A Long Time

Yesterday I ran. It's been a long time since I did the stroll — been a long lonely, lonely, lonely, lonely, lonely time. It was good! Ran in the Tuggers Parkrun, trying to jog at MAF heart-rate (130 for me) — ended up averaging 132 with my underused heart soaring into the high 130s on every miniscule incline of the 'dead flat' course. Time was 31:09 and heart-beats per km 822 (an all-time PW for a race).

My legs felt okay and more importantly my arm wasn't throbbing (like it was in the last couple of runs before the DVT was discovered). I'm now on a reduced dose of 20mg of Rivaroxaban per day for the next 3 months. The swelling has reduced but it has a way to go before every would-be arm wrestling challenger I approach stops crossing to the other side of the street. I haven't gone back through my diaries but I'm pretty sure 24 days off running is the longest streak I've had since a plantar fasciitis injury in the early 1990s.

Whilst I've been off work I investigated rowing ergometers with the view to purchasing one — as a cross-training tool primarily, and also to race in competition. Local veteran runner Bryan Thomas has one — he and wife Trish are very keen indoor rowers. I had a go and was convinced I'd enjoy rowing so lashed out and now have a Concept2 Model D set up in the spare room. Clearly from the video below my technique needs polishing! If you'd like to see how to row well on an ergometer, the lady on this video can show you how it's done.

I've been told not to run

My running came to a sudden, unforeseen stop last Wednesday. The doctor told me not to run until my arm had "settled down" — at the moment, it's settled, but settled up! On the Monday prior, I'd noticed significant swelling in the arm, which came on abruptly. A visit to the E.D. and an ultrasound showed numerous blood clots. Turns out I have DVT in the arm — unusual, as when we think of DVT the legs come to mind. The cause in my case is uncertain. It could be due to a trauma (I vaguely recall bashing my wrist into a door a while back), or some underlying 'mechanical' cause. Further blood tests and a ct-scan later this month may shed further light on the mystery.

I'm on a 3-week course of Rivaroxaban (2 tablets per day), followed by a further 3 months of 1 tablet per day. This drug thins the blood and prevents further clotting, but from what I've read, it's the body's own systems that either break down the clots or divert blood around the damaged veins. The danger of running while I'm in this acute phase is that more rapid blood movement may dislodge a clot and move it to the lungs. The doctor said "unlikely now" [that I'm on Rivaroxaban], but that I should be careful. She said light (lower HR?) exercise is okay and encouraged, such as walking but running is out until the swelling has reduced. Apparently this could take anywhere from a couple of weeks to a month or more.

So, my immediate running and racing plans are on hold. No dicing with Janene in the Mother's Day 5k Classic this Sunday! I'm hopeful of being able to race in the City to Surf in August. I think July's Gold Coast 10k could be too soon. In the meantime, I've commenced a streak of not running — now up to 7 days and counting. Go me! 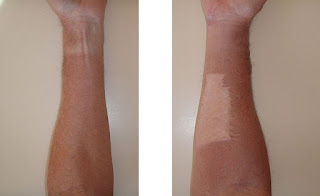