I've been running for almost 38 years yet only found out about 'De Verheul methode' this week. Am I slow, or what?! I'm excited about this discovery due to the possibility that training using this method will return springiness (and with that, speed) to ageing legs. Young runners have natural spring and recoil in their tendons and muscles which sees them travel further with each stride. As we age our stride shortens ever so gradually year by year. This is even more noticeable with marathon runners who spend a lot of time doing the long runs that are necessary for marathon success. I think Verheul training could be the secret to providing me with the fresh and springy legs I enjoyed at The Sydney Harbour 10k on a more permanent basis.

Herman Verheul is a Dutch coach who in 1979 had surprise success with two runners, Klaas Lok and Joost Borm, finishing 1st and 2nd in the Dutch National Cross Country Championships. The two runners had a supple and relaxed technique which was commented upon in newspapers the next day, just as much as their shock defeat of race favourites Gerard ter Broke and Tonnie Luttikhold. Verheul's coaching philosophy was explained in a 2005 book written by Lok, "Het Duurloopmisverstand" (The Misunderstanding of Endurance Runs). Verheul trained his runners with daily interval training, a gymnastics session, a weekly fartlek run in winter and weekly races. "Daily interval training! That sounds like torture!" I hear you say. No, Verheul's method is very different to the breathless, lactic acid burning pain that one thinks about on hearing the word 'intervals'.

Verheul used short relaxed intervals with relatively lengthy and slow recoveries (1:1 by distance on interval to recovery). The pace was fast enough to develop reactivity and economy but slow enough to be aerobic and repeatable day to day. Pace of the fast running was individualised and not prescribed, but typically, the fastest pace for a session of 10 x 400m was 5k race pace. 200m intervals might be as fast as 3k race pace. Verheul believed that slow endurance runs developed a 'heavy' stride and long time 'on stance' while fast intense intervals undermined relaxation. He also believed that heart rates above 150 beats per minute (other than in the weekly races of course) "might add nothing to the development of the human organism and might be useless and maybe even detrimental." The 150 figure would be about 80% of maximum heart rate (for myself, about 127), which is incredibly low compared to traditional interval training. I used to achieve my highest recorded heart rates during a session of 5 x 1000m — no wonder intervals were so hard!

I commenced my experiment with the Verheul Method on Wednesday with 10 x 300m on trails with a 300m recovery walk. Maximum heart rate was way too high at 148 which I put down to inexperience, enthusiasm and the hills. Thursday I ran 10 x 300m and 10 x 200m on the treadmill (more controlled) at 5k race effort and a maximum heart rate of 127. Yesterday I ran 10 x 100m in the morning and a 5k race at lunch time in 24:33 with the legs feeling good on a windy day. Obviously it's early days and I need to fine tune my training in the coming weeks. I think it will consist of easy morning 'shake-out' runs of 3k with afternoons of: Monday 15 x 200m with the Speedygeese, Tuesday 10 x 400m at the Lake Stakes, Wednesday 10 x 300m at the BBQ Stakes, Thursday 10 x 400m, Friday 5k race, Saturday 10 x 200m and easy Parkrun, Sunday fartlek on trails. I'll let you know how things progress over the coming weeks. Bring on fresh and springy legs! 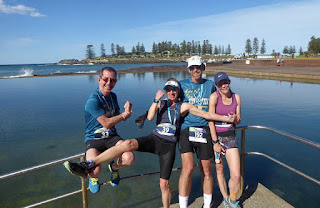 The July 9 Sydney Harbour 10k was a new race for me — one I'd been looking forward to, in part because the event organisers promised a fast and scenic course. My last 10k race had been The Melbourne Marathon 10k back in October (52:27) and the last time I'd been under 50 minutes was in 2015 at Melbourne (47:39). My goal for Sydney was to break 50 minutes but a head-cold in the last 2 weeks changed my expectations to 'having a good run and enjoying the scenery.'

Sunday dawned a spectacular Sydney day — sunny, mild (for winter) with just a light breeze. I ran a short warm-up with Norma (aka Luckylegs) who would win the 80-89 category in 79 minutes. My starting position was good, not too far back from the front of the 'B Group' corral for runners expecting a time of 48 to 55 minutes. The start was smooth and as we wound our way down through the Rocks I felt like I was running at about 5-minute per km pace.

After settling in to my race effort I began to experience an amazing feeling — my legs were fresh and springy! Wow! It was like one of those track 3000s from twenty years ago when I'd have to shorten my stride to avoid tripping over the runners in front. I felt like I was running on the spot. Seductive! I want this feeling of fresh and springy legs again. The race continued, along the narrow paths of Darling Harbour and at one of the U-turns I saw that I was ahead of the 50-minute pacer. My legs were still feeling good but I slowed a little on the one hill of the course (a bridge back to the city at 6k). It wasn't long before I was back running beside the harbour, under the famous bridge, onto the boardwalk and raising a modest sprint through the finish chute — 48:58 for the 10k. Happy with that.

Since the race I've been wondering why my legs felt so good on that particular day. Was it because of the rest day on the Saturday? Or because my regular 80k per week mileage had been down to around 60 in the 3 weeks prior to race day? Or because I'd started running short intervals on the treadmill and the grass track at Calwell? Whatever it was, I want to have legs like that again. If I can have them for a 5k race I'm sure I'd be in a good position to get under 23 minutes. 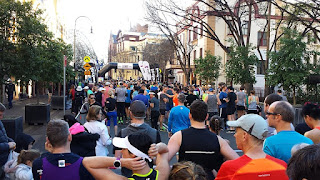 Ready to start in the Sydney Harbour 10k