The Hunter Becomes the Hunted

I'll let you in on a secret: my tactics for racing during a 5k. These tactics are sensible, but take practise to execute to perfection and don't always guarantee success. After the start I ignore my opposition and begin at even pacing to produce a finish time I know I'm capable of running. This is harder than it sounds, as adrenaline is high at the start of a short race. Many runners fly off with Usain Bolt-like acceleration. I ignore these speedsters and settle into my even-paced rhythm, running by feel (feeling a bit slow usually ends up being perfect).

After about 500 metres I look ahead (it's always ahead) to spot my opposition. Last Saturday this was Jim (red singlet) and Graeme (aqua long-sleeve shirt). I keep running evenly and this is usually enough to gradually shrink the gap. By 2k I was just 10 metres behind Jim but Graeme seemed to be out of reach, still about 50 metres ahead. I quickly drew level with Jim and passed him before the turn. In the middle of a 5k my even-paced running continues (it feels like I'm running faster). On Saturday this saw me drawing away from Jim, then just after 3k (somewhat surprisingly), rapidly gaining on Graeme (running next to a lady in black).

If I'm even with my opposition at the 4k mark of a 5k I begin my long surge for the finish. Sprinting isn't my forte so I like to get away from my opposition well before they get a sniff of the finish line. Such was the case on Saturday — I drew level with Graeme, sensed he was weakening, and moved ahead. In retrospect I should have overtaken with more authority and perhaps he would have thrown up the white flag. He didn't. The hunter had become the hunted. My tactic in the final kilometre of a 5k is to keep running hard and save my alactic energy (modest sprint) for the last 150 metres. At the Tuggeranong Parkrun there's a small hill 150 out and I sprinted off that as hard as I could. I thought I was destined for a 'win' but with 50 to go Graeme flew past with a devastating sprint. Bastard! 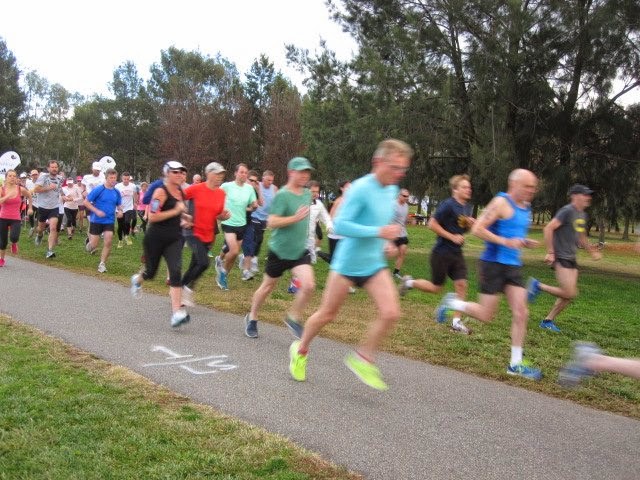 Go! Graeme (aqua shirt), myself behind John in blue shirt 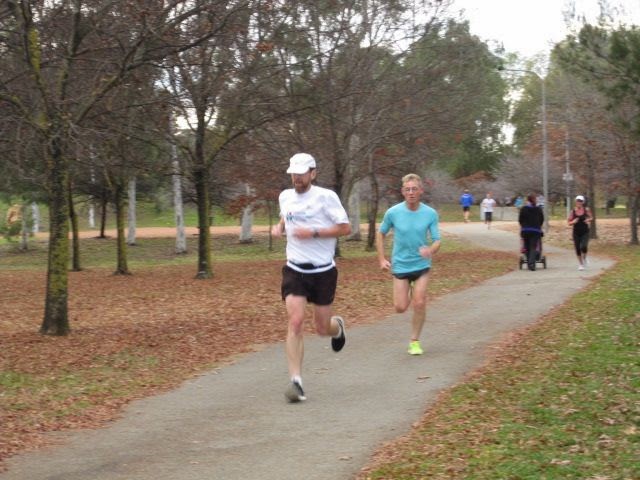 A good 5k and racing Jim

Last Saturday I raced the Tuggeranong Parkrun 5k in a time which confirmed my improving form: 23:12 — 30 seconds faster than my best this year. Not far off the 22:46 I ran last April prior to the DVT 'injury'. I'm happy! The race was one in which I was catching people all the way — Jim unusually early at about 200 metres (he was taking it easy due to a second race that afternoon), others before the turn, Karen as she was approaching 3k and a few more after the bridge. My splits were very even: 4:38, 4:38, 4:37, 4:39 and 4:40. Not an express last kilo, but I was getting tired! With some interval training (or more endurance?) the idea of holding 4:30 ks seems entirely possible.

I like racing Jim because he always puts in an honest performance, racing hard all the way (unless there are extenuating circumstances, like recovering from having his ankle in plaster last year). At the moment we're closely matched but 20 years ago I could win by using the secret weapon of... youth! We're different in many ways but our racing times are similar. Jim's 64, I'm 57. He weighs 60kg, I'm around 74. My training is 6 or 7 days a week of MAF effort running and a weekly race for a total of 60 to 70 kilometres. Jim rarely trains — he just races. A typical week might be two races on the weekend and one on Tuesday or Thursday. Very occasionally he'll do a steady training run, but not often. So it surprises me somewhat that we're close rivals. Racing Jim is good fun! 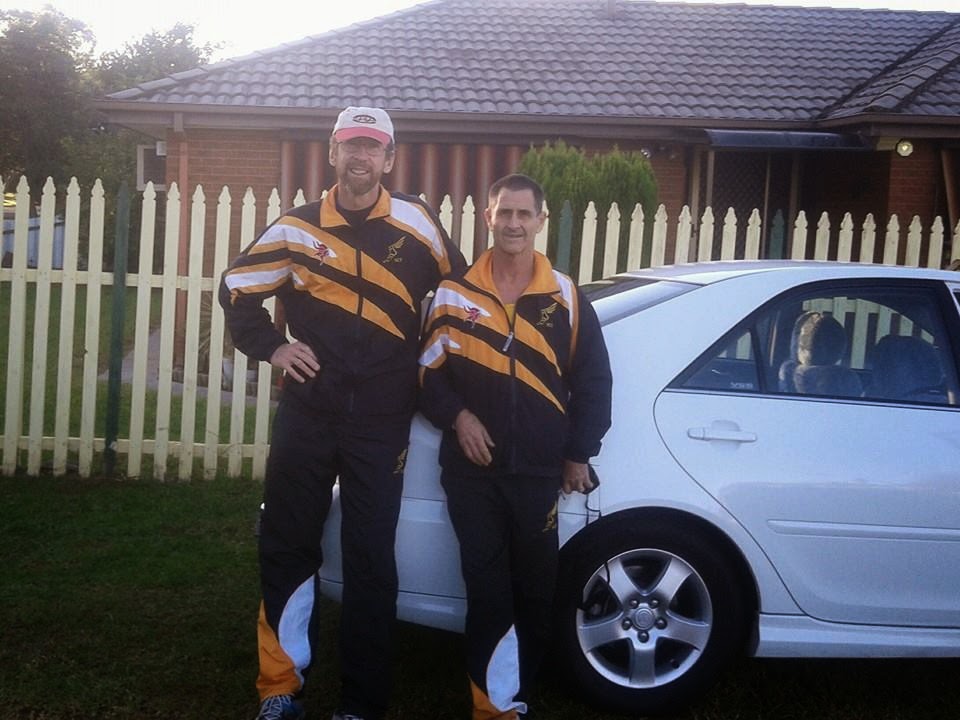 Myself and Jim after driving 350k to Albury on the morning of the Nail Can Hill Run. Yes, Jim's 'driving endurance' equals his running endurance!
Posted by Ewen at 6:26 pm 14 comments: