My running (and cycling) is going well. I'm comfortably managing to do around 40 kilometres per week of running and 220 of cycling. I reckon the cycling is keeping my aerobic condition at the level it would be if I were running twice that much and doing no cycling. I'm enjoying the cycling — it's fun and less sweaty than running. In the past two weeks I've had a couple of races that excite me to the possibility of running really fast. For me in 2015, 'really fast' is 22 minutes for 5k. A time that once was so easy!

The first race was a cross country 'Summer Series' event at Barrenjoey Drive — 3 laps for 5k around a dirt road and bumpy, sandy track course near Lake Burley Griffin. I felt good during the race, running evenly, catching and passing people during the second and third laps. Maria said afterwards "You're running well!" My time was 23:29 at an average heart rate of 143, only marginally slower than the 23:17 I ran in February 2012 (AHR 148). Four weeks after the 2012 Barrenjoey I raced a 5000 on the track in 22:14.

The second race was the 'Pennington' 3000 metre event on Thursday afternoon. It was an 'age handicap' with start groups based on WAVA A/G % tables. I took off with Roger as Sue was about to complete her first lap. Rog bolted, so I settled into my 'run-by-feel' race pace with Sue breathing down my neck after her first lap. I gradually cut into Roger's 30 metre lead over the next 2k. Sue went past when she had 1 lap to go (2 for myself and Rog). I got to within 3 metres of Rog but he sprinted hard over the last half-lap, beating me to the line by 2 seconds — 13:22 to 13:24. Not a brilliant time, but it was a warm afternoon and I'd felt good during the race. Really good! Cross country and track racing are the two types of running I enjoy the most. I'm looking forward to further solid training before the ACT Vets' 5k Championship in a month's time. 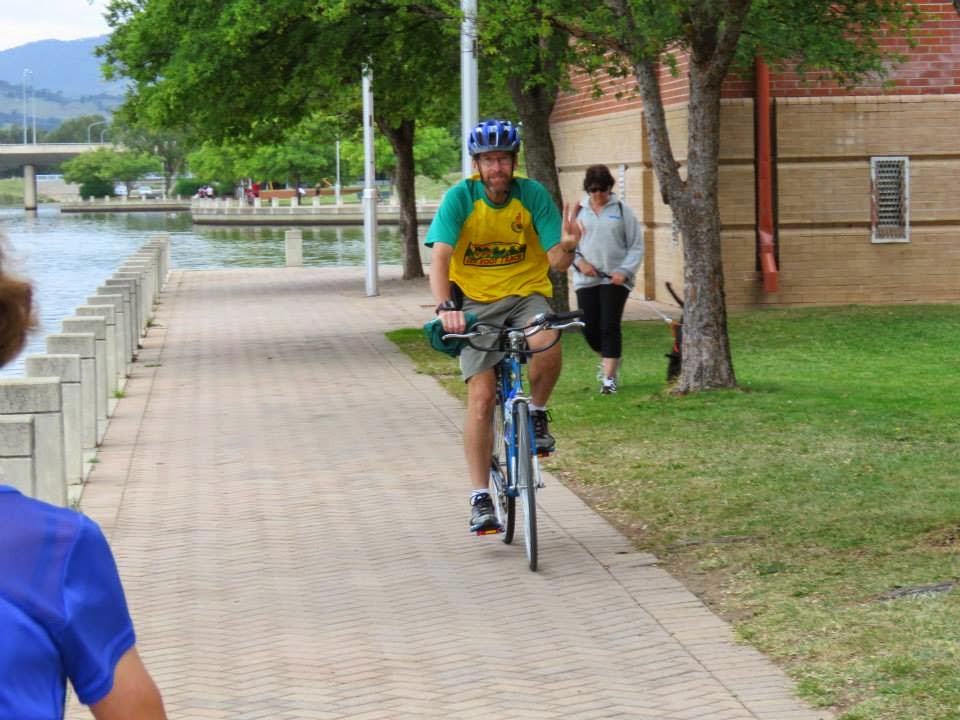 Cycling back along the Tuggeranong Parkrun course after volunteer duties