The YMCA of Canberra Runner's Club organise the annual 'Runners Shop' races — a choice of 2k, 5k or 10k distances on relatively flat bike paths beside the Molonglo River. It was two weeks ago, on Saturday afternoon, 21 July. I was keen to race the 5k and prove to myself that the 23:14 from Hervey Bay wasn't a fluke of Queensland warmth and friendliness. The 5k and 10k races incorporated the ACT Road Championships for juniors and seniors respectively but runners of any age were free to enter either event.

My warm-up went well and I lined up on the flat 'beach' amongst a field of 54 runners, three quarters of whom were under 20 years of age. I was expecting a fast start but it never ceases to amaze me just how fast young runners take off! Their frenzied sprinting off the line had me doubting my pace judgement. Once around the point and onto the main path I settled down and ran an effort which felt similar to Hervey Bay pace. Thankfully I had a few runners for company. I didn't look at my Garmin during the race but afterwards the first km showed as 4:29, too fast!

The course is out/back with a small rise onto the bridge over the river and two more tiny hills in the final kilometre. I'd say it's a fraction harder than the Hervey Bay course. After 1k I set my sights on chasing Cameron (about 50m ahead) and a couple of young runners. It was a 'grinding' type of chase, my legs not feeling as fresh as I would have liked. At the turn I was about 15m behind, while chasing me closely was Fiona. Running back to the finish I was gaining on Cameron but at the same time felt like Fiona would go past if my speed slowed a fraction. I overtook Cameron with about 500m to go but then he flew by in the final sprint for the finish line. I could see the clock ticking over 23 minutes, but just over — 23:10, very happy with that. Garmin splits: 4:29, 4:38, 4:42, 4:46, 4:30 +7s.

Race week had been 107k and since then my mileage has been similar. The Canberra winter is finally sliding away and with that we're all looking forward to warm Parkrun mornings, crowds of happy runners and fending off swooping magpies at the BBQ Stakes 6k and on long Sunday runs with the Speedygeese. 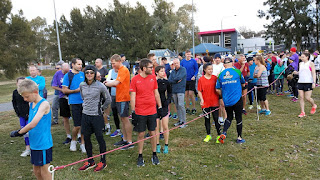