Last Monday was a public holiday (Queen Liz's birthday), so I drove to the War Memorial to do the short version of one of my favourite long-run loops. The distance was 12.5k — I'd run this same course just prior to the DVT diagnosis. That run took me 1:13:40 to complete, at an average heart-rate of 129 (right at my MAF HR). On Monday I ran 1:13:22 at 128. So it looks like I'm back to where I was (in terms of fitness) before the time off. Or near enough — I'd observed it was windy for parts of the run in April.

After the diagnosis I had 24 days off from running (or any form of exercise more strenuous than vacuuming). On the 25th day I resumed running — jogging actually. All runs since then have been at MAF heart-rate (except for a weekly 2.5k cross country 'race' were the last kilometre would be over MAF — I'm not going 'all-out' in these). I've gradually built my weekly kilometres: 9, 28, 40, 49 and 56 this past week. I'm on 20 mg of Rivaroxaban per day until August at least. I see the specialist then to have another ultra-sound and blood test.

My running is going well and I'm hopeful of being fit enough to run under 70 minutes at the City to Surf in August. I've been running a hilly trail course — letting myself go a bit on the downhills (as recommended by Phil Maffetone in his book as a way of introducing speed while staying under MAF heart-rate). The short 'downs' of these runs would be around 5-minute k pace, while the 'ups' would be over 6-minute pace. I can also feel some benefit coming in from the Concept2 rowing — still not doing a lot of weekly metres, but my technique is improving. I rowed 5k in 21:39.7 recently, which ranks me 53 out of 70 in the world for 2014 season of the 50-59 age-group. I can feel that the rowing is strengthening my quads/core and also benefiting me aerobically. Haven't been doing too much Xootring though, mainly on account of how bloody cold it's been! That'll be a Spring to Autumn sport. Yes, I'm soft.

Yesterday I watched the ACT Cross Country Championships at Stromlo — it was cool and sunny — perfect weather to watch people race!
Posted by Ewen at 12:05 pm 14 comments:

My arm is slowly returning to it's wimpy good looks. Must admit, it's taken much longer than I expected for the swelling to go down. The haematologist was happy with my progress when I saw her last Monday. The Ct-scan was good — showing no underlying abnormality. The blood test was also good, although my haemoglobin was low at 131g/L (historically, it's always been between 125 and 145 so I guess my body isn't keen on iron). The weekly volume of jogging is slowly increasing (40 kilometres this past week). I haven't been doing a lot of rowing on the Concept2 as I want to wait until the arm is feeling 100% before ramping up the volume.

I'm interested in the relationship between rowing and running — how 'good' rowers compare to runners. Some rowers say there's no relationship! You're either a good rower or a good runner. With rowing, it's an advantage to be heavier (up to a point) with elite male scullers being around the 90kg mark. For indoor rowing records there are two classes, with the lightweight class being for males under 75kg (I scrape in at 74.1) and females under 61.5kg. Records for masters rowers are much closer to rowing world records than similarly aged runners are to running world records. For example, the indoor rowing world record for 5000m is 14:58 (set by Rob Waddell, the Sydney Olympic gold medallist), while the M50 record is 16:24 (a difference of 1:26). The 5000m running world record of 12:37 is 2:16 slower than the 14:53 M50 world record. Running is faster than rowing, but at the moment I'd run 5k in about 24 minutes and can row it in 22:27. Think that means I'm more suited to rowing than running. Perhaps I chose the wrong sport 33 years ago!

As well as rowing, I've also taken up scootering for cross-training (and for fun!). I decided to purchase an 'adult sized' small wheeled scooter (rather than a kick-bike) — mainly due to the portability (it folds up and you can carry it with a strap over your shoulder). The "ultra-low-resistance polyurethane" tyres don't get flats! I can scoot on Canberra's bike paths and never have to stop to fix a flat tyre. See this short video of my first attempt — a bit wobbly, but I didn't stack so all good. My technique has improved and I can now scoot with either leg (and switch legs on the fly). Out of interest, the following graphs show my heart-rates for the three activities — a hard 5000m track race, a hard row and an easy scoot. 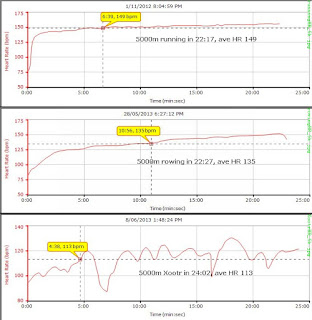