Ego checked at the door

Scott Brown brought my attention to a post on Tim Waggoner's blog about MAF training. Tim was told by Mike Pigg in 1996 "to just train at HR 145-155 as much as possible and I would do anything I wanted." Following this advice, Tim went on to be #1 amateur in the world at the Ironman Triathlon by the year 2000. This is the base-phase training advocated by Phil Maffetone. Googling around I came across a forum post with a lengthy excerpt from the "Lore of Running" in which Timothy D. Noakes talks about the training of Mark Allen under Maffetone.

Mark Allen has an article on his website about how he switched from the "No Pain, No Gain" motto when he was a competitive swimmer to training for triathlon with his ego checked at the door. In other words, not "winning" training sessions but patiently logging mileage in the heart-rate zone advocated by Phil Maffetone. According to Noakes, Allen would monitor his progress by "regularly completing an 8-km run at his maximal allowed aerobic heart rate of about 150 beats per minute. During his Patience Phase his average pace when running at that heart rate would fall progressively. When he first started training according to the Maffetone approach, his aerobic pace during this test was 4:05 per km. During this phase, Allen would expect his running speed at his aerobic heart rate to fall by about 3 to 4 seconds per km per week. When Allen retired in 1995, his aerobic pace had improved to 3:19 per km, as the result of a steady progression during his entire career. For physiologists used to reporting human training studies lasting a few months, this is a remarkable finding. It shows that the human body may continue to adapt for 10 or more years to the form of prolonged, intensive training undertaken by Allen."

What do you think? Is there something bad in the blood chemistry of anaerobic training that retards aerobic development? My inclination is to continue training along the lines advocated by Maffetone until my pace for the MAF test stops improving. The training range for me is a heart-rate of 130 to 135 (or lower) and I'd test my progress at a HR of 130 (79% of maximum). My pace at this HR right now would be about 5:48 per km (9:20 per mile). If my pace at that HR improved to 5:20 kilometres (8:35 miles) I'd be within cooee of running 20 minutes for 5k.
Posted by Ewen at 8:34 pm 20 comments:

I've had a slow start to 2011. Feel a bit like the GSX1400 chugging along on three cylinders. Two weeks down — 53k and 82k (my "year" started on 27 December due to my habit of logging mileage in 4-week blocks — 4 x 13 = 52). Spent some time over Christmas and the New Year in Wagga Wagga helping the siblings with a garden makeover at Mum's. She's 85 this year and going strong, but has this strange habit of collecting thousands of pot-plants.

I'm behind the first two weeks of last year, which were 83k and 90k. Speedygeoff has run 100k this week and I'd like to join him on that type of mileage as my base-building phase continues. Had a lovely (if humid) run around Lake Burley Griffin yesterday for 24k with Ruth and Andy. Struggled a little after 20 — I'm not used to running that far! Plan to race the 5000 on Thursday evening — would like something under 23 minutes, but my confidence isn't great. We'll see. 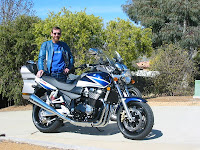