Now I know the way to San Jose

I've been back in Australia for six weeks. During the second half of our trip I gave up on the idea of updating my blog. Various things have conspired to keep me from blogging since I've been home. One problem was the large number of photos I took - 1,723 in all. I've finally edited them down to the manageable number of 48 for viewing on this web page.

The trip had quite an affect on me. America is a beautiful country. We drove over 3,000 miles

after picking up the Ford Taurus in Portland, Oregon. We arrived there travelling by bus from lovely Vancouver to Seattle then train through picturesque and green southern Washington.

We enjoyed wonderful hospitality at Joe and Deb's in Kings Valley, Oregon. Here a hugely fortuitous decision was made to drive to San Francisco via Crater Lake rather than visit the home town of Steve Prefontaine at Coos Bay on the Oregon Coast. I haven't space to describe the beauty of Crater Lake. Snow was abundant for our visit on a perfect day.

I'd received an email from Sarah with some tips on what to do on the way down to San Francisco. When we arrived at our B&B, I couldn't contact her for our planned Golden Gate Bridge bike ride due to a phone number mix-up. From San Francisco we drove south on highway 101. Fifteen miles north of San Jose we turned east on highway 84 and drove to Yosemite National Park.

Yosemite has huge rock formations and waterfalls and, as it was the holiday season, lots of tourists. The road from Yosemite over Tioga Pass at 9,945 feet had been open for just over a week after being cleared of snow. 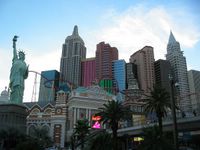 This was a spectacular drive as was the trip south on US 395 to Lone Pine. On June 27 we drove east through the fascinating and hot Death Valley to Las Vegas.

Joy loved Las Vegas. I think she'd have happily spent the remaining 9 days of the trip right there. Instead we drove north-east travelling briefly through Utah, arriving at the Grand Canyon on July 1. We were only there for 5 hours. Our original plan was to stay at the North Rim the previous night but bushfires had closed the only road to our lodge.

I want to return to the Grand Canyon. Looking out at that vast space which had it's beginnings 20 to 30 million years ago makes you think about all the beauty in the world. 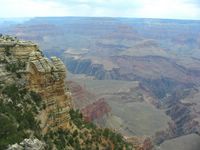 Theodore Roosevelt said "keep it for your children, your children's children, and for all who come after you, as the one great sight which every American should see." I think every visitor to America should see The Grand Canyon.

In Flagstaff, Arizona, we stayed at a motel on Route 66. Our drive continued to San Diego through some more spectacular and varied desert landscapes. Only too soon it was time to head north. We escaped from the hectic 6-lane Interstate 5 and followed highway 101 with it's Pacific Ocean views. We passed through Carlsbad, San Clemente, Laguna Beach and Long Beach, arriving at LAX with four hours to spare before our flight home. Thanks Joy and Mal for a great trip!
Posted by Ewen at 9:55 pm 15 comments: