Two rights and a left

I was going to title this one "2008 was great mate" — but I worried if it was ever read by Kate, she might become irate. Before talking about the year that was, I'll tell you a little about Kate...

She ran with us at Calwell for most of her teenage years. She loved running and racing. She always smiled at our silly welcoming rhymes: "Are you feeling great today Kate?" or "We've had a debate, and it's your fate, to run hill repeats Kate." She was a talented middle-distance runner, clocking 5:03 for the 1500 metres as a 13-year-old. Various injuries and illnesses meant her performances as a junior runner went sideways. Now in her twenties, she works as a personal trainer and runs for fun and fitness.

My 2008 has paralleled Kate's racing career. I finished the year with results pretty much the same as they were at the start. Well — both my 3000 and 5000 are actually a little slower. I believe I can scrape a slight M50 PB in the 3000 before the track season finishes in March, but it would be nowhere near 11:07. That singular goal for the year hasn't been helpful. It was too far away. Would Scott aim to break 2:45 for the marathon before dipping under 3 hours? Next year I'll select a goal for 3000 metres that's more alluring.

Even though I didn't achieve my goal for 2008, I really enjoyed my running. It's all about the journey. Arriving is secondary. I hope you had as much fun as I did, and continue to do so in 2009. Keep writing about it, and I'll keep reading.
Posted by Ewen at 9:52 pm 22 comments:

Thanks all for your comments about my unlikely victory in the 5k last week. Robert Song's rang true — I'd rather have a memorable race against other runners that results in a PB, than win by "doing a Bradbury". On Thursday I raced over 1500 metres on the velvety grass of the Woden track. I was rightfully flung back to my usual mid-field position — placing 9th in 5:46.8 — 8.4 seconds shy of an M50 PB.

I warmed up in the Frees on legs that were again uncooperative. My confidence was less than effusive. I decided to run barefoot — I did much of my training and racing sans-shoes in the old days — I remember it feeling good and fast. The race went fairly well. I didn't quite have enough zip in the legs to go out with the small group of Gary, Dale and Heath (5:32, 5:34, 5:41). I concentrated on keeping the third lap from sagging too much, and was partially successful. My splits were 90, 92, 95 and 70 (300m). I'm sure I didn't look as good as Zola, but it was fun emulating her famous method of racing.

This week has been similar to the last — what I'd call "a good training week". There have been three hard days — two interval sessions and a race. The second interval session yesterday morning was run with the Speedygeese on the delightful grass of the "international standard" cross country course at Stromlo. We ran 3 x 1k with 1k jog recoveries. My times for the fast kilometres were 4:16, 4:08 and 4:02. I must say I haven't felt on top of my game for all three of the hard days this week. One day of easy running between hard days doesn't seem enough. 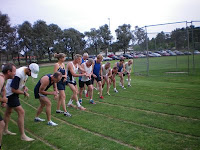 Doing my best Zola Budd impersonation on the grass track at Woden [Speedygeoff photo]
Posted by Ewen at 5:34 pm 22 comments: