Back in July of 2017 I wrote a blog post about my discovery of the Verheul method of training for running, following up with further posts about my experiences training this way. Last Christmas I received a book — Easy Interval Method by Klaas Lok (one of Verheul's original pupils). I was excited to read the book and find out if I'd been doing Verheul training correctly back in 2017.

The book has many examples of runners who improved and ran successfully using the Easy Interval Method, from 'average' club runners to Olympic and World Champions. An example of the former is Bertrand Maas who improved his 10k from 52 minutes to 44:21 and half marathon from 2 hours to 1:47 — of the latter there is Faith Kipyegon (gold in the 1500m at Rio) and Geoffrey Kirui (26:55 10k and World Marathon Champion in 2017), both coached by Piet de Peuter in Kenya. There are examples of Masters runners such as John van der Wansem who switched from high mileage (Lydiard style) training to the Easy Interval Method at the age of 35. John ran 14:21.6 for 5000m as a 40+ runner and 31:49 for 10k at the age of 51.

For ACT Masters runners, track racing has commenced again (there have been no Covid-19 cases in the ACT for a number of weeks). Last Thursday night I ran the 3000m with no expectations besides putting in a solid effort. I found myself racing Roger and Thea in the early laps. After 1k I passed Rog and tried to keep the gap to Helen ahead from growing larger. This was a successful strategy and I placed 10th in 14:52.16, with Helen running 14:36.58. The winner (M30) Adrian ran 9:22! I will continue to race on the track for the remainder of 2020 with perhaps a parkrun 5k if we get started again (Tasmania is starting on October 17 so it's likely we won't be far behind). 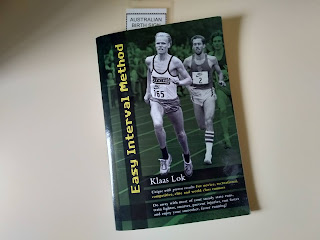 The ball is still rolling

Is anybody out there? The title for this blog post comes from the coaching philosophy of Tom 'Tinman' Schwartz. Tom tells a story about building a snowman as a boy and rolling a ball of snow for the base of the snowman. His mum calls him in for lunch; he returns and is disappointed that his ball won't budge from the frozen ground. The first 'rule' of good distance running training is to 'keep the ball rolling' — avoid superman workouts that might leave you too sore to complete the following day's training. Build day upon day, week upon week, year upon year and your running will improve. Interruptions from injury and illness will be minimized.
My ball of snow has been carefully rolling since the hamstring injury which followed the City to Surf last August. Weekly distance has been hovering between 50 and 60 kilometres. Races have been few and far between with large fun runs cancelled although there are plenty of local events (limited to 100 starters at the moment). No parkrun 5k runs which is a bit sad.
The racing goal this year is to run as much under 25 minutes for 5k as I can. The one 5k I've raced was the YCRC Runners Shop 5k (road) on 18 July, finishing 50th in 25:38. The field was composed of mainly fast juniors (the winning times were 14:52 and 18:32). I was running alone very early on, with Speedygeoff disappearing in the distance to run a good 24:12 at the age of 72. It looks like parkruns won't start up again until next year so my 5k races will be on the track from October or on the road at the weekly 5k Customs Joggers run. I hope you are all well — I'll catch up on blog reading over the coming weeks. 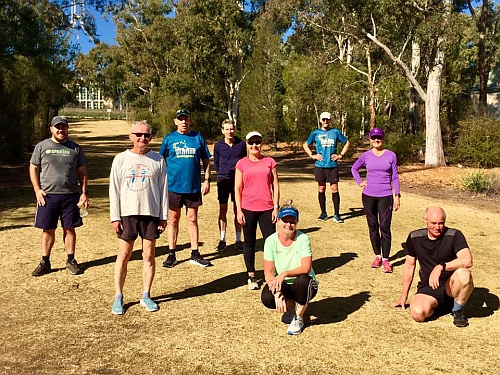 Geoff with some of the lunchtime Speedygeese runners
Posted by Ewen at 7:17 pm 13 comments: