I just want to play ball

I have a race coming up — 10k on the flat roads of Surfers Paradise this Saturday morning. A 6:30 A.M. start — not my favourite time of the day to unleash a cold, creaky body into the fray of a fast race. I should awake a couple of hours earlier. Yes, that might work. In 2010 I ran 49:26 but wasn't in the aerobic shape that I am this year. Back then my 10k local runs were at 750 heart-beats per km or higher — now they're consistently around 700. I should be good for around 680 in a flat 10k race so that indicates a possible time of 45:20. I'd be happy with that. I haven't had a serious race in a while so I'm keen to play ball. At least I've never missed out on the chance to play ball — like the women marathoners of the '70s or women steeplechasers of the '90s.


A couple of interesting images have shown up on Twitter: stills of the foot-strikes (captured from high-speed video) of every competitor in the U.S. Olympic Trials 10,000 metre races — men and women. The variation is quite incredible: there is heel-striking, toe-striking and mid-foot striking — all from elite (fast) distance runners. I think it shows that how the foot first makes contact with the ground is the least important aspect of running form. Forget about foot-strike. Think about hip extension, body position, relaxation and cadence if you wish to improve your running form. 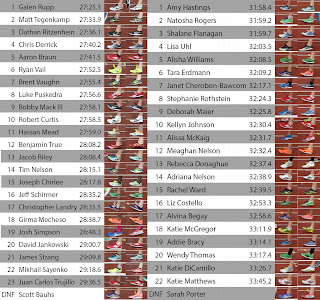 The foot-strikes of elite 10k runners is somewhat variable
Posted by Ewen at 2:01 pm 16 comments:

I've been thinking more about that Sally Kipyego quote I mentioned in Sally's 14:43 Secret: "Julia, don't try to be great, just do every day pretty good like you're supposed to, and then you'll be great." There's a book called The Horse Whisperer (made into a Robert Redford film) that tells the story of how a traumatised horse and rider are coaxed back to a normal relationship by a horse whisperer, Tom Booker. The methods a horse whisperer uses are gentler and kinder by comparison to traditional horse training techniques. I think I should apply a similar philosophy to the training of myself as a runner. Hammering out 'PB interval sessions' or running weekly races with the desperation that a sheep station is riding on the outcome, seems to me like traditional horse training. Runner Whispering has to be a better method of finding that holy grail of improvement — the 'doing every day pretty good' that Sally Kipyego advises.

I've also been thinking about what's needed to be a successful distance runner (besides carefully selecting one's parents). In my search, I stumbled upon the blog of a running philosopher, Jeff Edmonds. One of Jeff's older posts caught my eye: 'Keep it Simple, Yo! Distance training, from 5k to 50k'. Jeff mentions that speed per se is not the problem for distance runners who want to run faster. The problem is extending one's speed over the distance of the race. For example, I can run 1k in 4 minutes, so how can I train my body to hold that speed for 4 more kilometres. Jeff's answer in three words: "run a lot." He put up one of his own weeks of training as an example — 83.2 miles, all 'easy' running except for 5 miles 'tempo' and 8 miles 'moderate'. He was hardly suffering a horse whipping in the tempo run — 5:40 mile pace (about 3:30 per k), which is quite modest for a 15:48 5k runner. Jeff is now running less 'mileage centric' training (about 70 miles/week including 2 'workouts'), but I'd still categorise that as whispered training.

I'm whispering my own training along quite well. Ran 80k last week, including an 8k tempo run (5:07 per k) and one of those 'almost perfect' easy runs on Friday (would have loved to have been racing that day!). This morning I raced 'easy' over the rarely run distance of 5 miles in the Sri Chinmoy event down at Telopea Park. The last time I raced 5 miles would have been in the late '80s or early '90s. Needless to say, I didn't threaten my lifetime PB (which is around 29-flat from memory), but ran a pleasing 38:43 at a comfortable average heart-rate of 143. My next big race is the Gold Coast 10k on 29 June — should be a good tune-up race for the Runners Shop 5k in late July and a happy break from the depths of a Canberra winter.
Posted by Ewen at 5:28 pm 12 comments:

Yesterday afternoon I raced in the 'Longstaff 8k' cross country event at Weston Park. The race is named after local running pioneer Rosemary Longstaff, who ran 2:43:03 in the '81 Boston Marathon (which was the 88th fastest female marathon time in the world that year). I've run this race quite a few times over the years, including the 3-lap (12k) and now thankfully defunct 4-lap versions. In 2004 I ran 79:54 for the 16k version (The Jack Pennington Trophy Race). This year I ran at a slightly slower pace for half the distance — 40:10 for 8k.

Once again I'm quietly encouraged by this result in what turned out to be a strange race. It was a glum afternoon but thankfully the rain held off while we were racing. Course wasn't fast — although the grass was short, it was wet and the run over one of the beaches was slower than usual as the beach had been 'ploughed' for some unknown reason. What made the race strange was my choice of tactics. After the initial settling down period following the start I had to decide who to run with on the first downhill 800m straight. I could see Pam up ahead and I knew she was a 21:30 or so 5k runner. At the time I happened to be in the company of Andy and Geoff, both capable of under 21 minutes for 5k on a good day. So my choice was "do I go, or do I stay?" I chose to stay and ran comfortably down the hill rather than pushing hard to get onto Pam's shoulder.

For the first 2k I ran along with a chatty Geoff and easy running Andy. At one point long-term rival Charlie edged ahead but I felt so easy I wasn't worried about eventually closing that gap. My legs felt amazingly good! I was running along with a nice feeling stride, breathing and heart-rate both comfortable. I moved ahead of Andy (Geoff had dropped back a little) and while we were crossing the first beach Andy alerted me to a loose shoe-lace. What the?! I must have forgot to double-knot them! I stopped to tie the recalcitrant lace, loosing 10 seconds or so in the process, which gave Andy and Geoff a small break. For the rest of the race I ran fairly hard but couldn't make up the lost ground. Geoff in fact took off in the last 2k, running strongly to finish in 39:06. Andy also increased the gap, finishing in 39:45. Meanwhile I'd managed to pass a fading Charlie.

On the face of it I've only improved my time for The Longstaff by six seconds in a year. For this race though my average heart-rate was 144 (150 last year), so obviously it was a much better performance (even accounting for the possible loss of a beat or two from my maximum HR that Canute mentioned in a comment on my last post). Bring on the next race!

My heart took a rest when I stopped to tie my shoe-lace
Posted by Ewen at 7:07 pm 11 comments: