This race was held last Saturday afternoon — a delightfully warm (for late May) and sunny day. Since then we've endured a couple of distinctly wintery cold, wet and windy days. I'm in two minds about this particular HM-eve 5k. I've run the event quite a few times over the years, so it's good one to compare how my 5k race-fitness is going. In that regard, I'll rate it a success, as I ran 22:21 at a satisfyingly low average heart-rate (147) — quite a bit lower than the 151 I averaged when running 22:14 for the ACT 5000m track championships in late March.

Of course it's yet to be done, but I think my current race-fitness is good enough to improve on my M50 5000m PB of 21:29.58. That race in 2008 was run at 662 heart-beats per km while the HM-eve 5k was at 657. A track 5000 is going to be faster as the 'course' is dead-flat, surface is perfect and there are no sharp corners (there were two last Saturday which needed momentary slowing to negotiate). I'm further encouraged by the times that rivals ran last Saturday. Robert ran 21:27 on Saturday and 20:22 in the track 5000. David ran 21:47 and 21:14 on the track. So I think I'm looking at running somewhere between 30 seconds and a minute faster on the track. The only problem being, there are no track 5000s until October!

So, as a fitness test the HM-eve 5k was satisfying. On the other hand, as a race, it was disappointing. I love the close competitive race experience — running with a 'bunch' of runners (half a dozen or so) and figuring out during the race what tactics to employ in order to win this race within a race. Last Saturday the first kilometre was 'fun', but thereafter I was running alone with the next runner about 40m ahead and try as a might, not making any impression on that gap. During the first k I was running with Robert (4:17 for that k), then he edged ahead. Near the 2k mark (4:22 split), David overtook, running strongly. The rest of the race was a bit of a grind (as races sometimes are), especially after the turn when we ran into a light westerly breeze back to the finish at Lennox Gardens.

This past week my training has been sort of okay, but I've succumbed to a cold over the past two days. I ran 78 kilometres including a couple of good 10k runs and a 5k tempo effort at yesterday's Parkrun — 24:32 at AHR 140, finishing 14th. The winner was Marty Dent, former steeplechaser, who'll be running the marathon for Australia at the London Olympics. Go Marty! 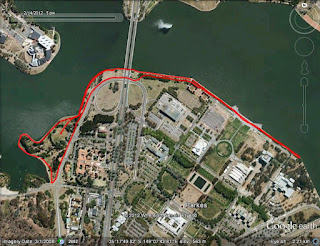 The HM-eve 5k course has a couple of sharp turns. Start is near the bridge; from there you run west. Finish is in the park at Lennox Gardens.

I'm always on the lookout for gems of wisdom from coaches and runners. Words that reveal a unique and successful training strategy or some other secret to running faster. At the same time, I tend to be wary of advice from elite runners. Extrapolating the training of an elite runner down to my level (that of 'weekend warrior') isn't necessarily the best way to lay out a training plan.

Having said that, my excitement level was almost beyond containment when I read a gem of wisdom from an elite runner just last week. The words were contained in a story by Peter Gambaccini — "Brief Chat: Julia Lucas in the 5000" and they pretty much encapsulate my training philosophy. The story was written after the Payton Jordan Invitational, a 5000m race which was won by Sally Kipyego in 14:43.11, while training partner Julia Lucas placed second in 15:08.52 (which happened to be a 25-second PB). In answer to a question about Sally's example, Julia says "It's really easy to forget how good Sally is. She's just there every day doing exactly what we do. In December, when practices started back and I was looking better than I had, she grabbed me by the shoulders and said 'Julia, don't try to be great, just do every day pretty good like you're supposed to, and then you'll be great.'" That's a quote worth remembering. Prizes aren't awarded for interval session PBs or training runs that leave you so sore and tired that you can barely jog for the next two days. It's the sum of all training that leads to a race-day personal best. Do every training session in a way that results in the desired outcome for that session and then you'll be great. Here is the Youtube interview with Sally and Julia after the race.

My running continues to go well. I've run another 10k heart-beats per km PB (692) and a couple of low-key 5k races (23:16 and 23:32). On the 6th of May I ran the Nail Can Hill Run 11.3k race, placing 288th in 59:31. As I was running along the sandy tracks of the Nail Can ridge, if I had some spare breath I would have shouted out "How good is this?!" Here I was, running amongst a crowd of mainly younger people, legs feeling light and springy, moving through the Aussie bush at 4:30 per k pace without a care in the world (apart from how could I beat the girl beside me in the black bike shorts and the grey-haired old bloke running a few metres ahead). 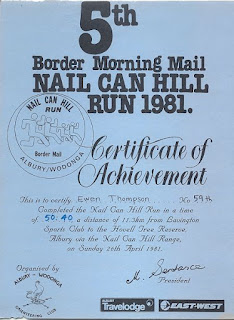