I've just returned to Canberra from a three week holiday in Hervey Bay, Queensland. The weather was perfect for morning runs, between 15 and 20 degrees, usually sunny. Nearly all of my running was on the flat brick paved Esplanade path beside the beach, averaging 90 kilometres for each of the 3 weeks. Runs were mostly easy, including light Verheul interval days, a couple of short tempo runs and 3 race efforts at the Hervey Bay Parkrun 5k.

The 23:14 race had John Street pacing for 24 minutes. John has run an amazing 20:51 in the 75-79 age category, over 90% age-graded. I started with John's group, the initial few hundred metres faster than the previous week. About half way to the turn on the flat out/back course I drifted ahead of John and found myself chasing a bloke wearing a '100 run' shirt, a lady and a couple of youngsters. Coming back I felt like I was running fast and relaxed, quicker than the previous week. The time of 23:14 was faster than expected. The following week I started perhaps a little too fast, 4:20 pace for the first 500 metres. Although I passed a few other fast starters, most of my race was a tale of gradually losing places and wishing it was over. The lady in 27th who ran 22:59 gained that 20 seconds over the second half.

Now I'm back in cold, sunny Canberra, waiting for warmer Parkrun mornings. While I was on holidays I finished reading Scott Brown's Samurai Running Book. A number of things resonated. Among them, that training is like the dripping of water that slowly carves out a rock. With distance running it's the cumulative effect of months and years of unspectacular but consistent training that produces success. And the tale of the apprentice swordsman who wanted to become great, asking the master swordsman 'how long will it take?' The answer he hears is 'ten years' but the apprentice doesn't have that long so offers to work twice as hard. The master replies 'if you work twice has hard it will take you thirty years to become great.' 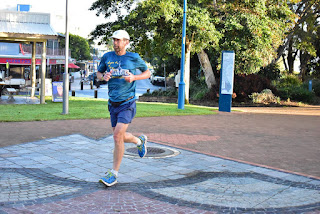