We competitive runners are always seeking proof of improvement. The most obvious test of course is the race: run a Personal Best in a race (or an A/G best for us old folk) and one has improved. However, it's also reassuring to have proof that our training is likely to produce that exciting race. For myself, I like the MAF test (my version of it), where I run a steady 10k at around 79% of my maximum heart-rate (which happens to be 130). If I've improved then the pace for the 10k is faster than previous tests.

On Sunday 12 June I was visiting Mum (with one of my sisters) in Wagga and ran my usual 8.2k loop. I had a good run! Covered the distance at 5:17 per kilometre (8:30 miles for imperial readers) with an average heart-rate of 134. Some rudimentary mathematics suggests this is equivalent to 5:26 ks at a HR of 130. If so, this would be proof that I've at last improved from the 5:37 ks I've been stuck on the past few months. Recent runs have confirmed this improvement! Phil Maffetone's table on my post Whispering Sideways says 8:45 miles for the MAF test means a 5k race somewhere between 20:58 and 21:45. If I could do that right now I'd be one very happy wombat.

Now, the reasons for my improvement aren't clear. As Jog said in a comment on my last post, the variables affecting running performance are many. My mileage remains relatively low — around 60k (37 miles) per week. There are more tempo runs in the mix (some of these have been races at 'tempo effort'). I'm also running my 7k hill loop again, which contains 12 hills of various gradients. I feel like my leg muscles are regaining some springiness and my stride is becoming longer. 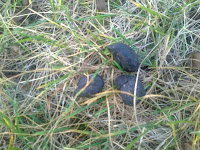 Kangaroo droppings are proof that Roos have visited my front yard!
Posted by Ewen at 4:17 am 22 comments:

I've been a little busy lately (working 6 to 4 on the chain gang), hence the late blog post. I read about Em's first marathon and it occurred to me that my first was 30 years ago (yes, I was crazy to start my running life as a marathoner). I should run another marathon one day, before my running becomes too glacial. Bob, now 76 (red striped singlet in the photo), said he became too slow for 42.195 kilometre races at 55, when he could no longer break 3 hours!

Jog asked in a comment on my last post about my use of the Powerbreathe. I've stopped (temporarily), as I'm trying higher quality, lower volume running (in my quest for a longer stride-length), and don't wish to muddy the waters by having too many variables going on in the experiment.

Happy runners after the Nail Can Hill Run
Posted by Ewen at 12:54 pm 15 comments: