This race was held last Sunday. It's a sister event of the Sydney City to Surf — same distance of 14k, but NOT the same crowd or hills. The field is limited to a very manageable 13,000 and the course is pretty much dead flat. My mate Jim encouraged me to enter after the City to Surf — he was going to 'do the double' of City 2 Sea followed by the Eureka Tower Run-Up. Mad bastard! Anyway, I'd entered and paid for everything prior to the hamstring injury so was committed to go, even though it looked like I may be a spectator.

In the end I was able to run (if in some discomfort) for part of the race. I decided early on to stop at 5k and walk the remaining 9k to the finish at St Kilda. It was a beautiful run — quite low-key compared to the City to Surf, but equally well organised. I started about 100 metres back in the 'Red Group' (for sub-75-minute runners). I would take a slightly embarrassing 1:52:10 to complete the 14k. I was pretty happy with my first 5k, keeping up with the people I was running with, clicking off ks of just over 5 minutes. Stopped at 5k in 25:42 (average HR was 144, the same that I recorded for the City to Surf!). Not fit!

Afterwards I easily met up with Jim (who'd run 71:08) and we caught a crowded tram back to the Arts Centre. We walked back to our hotel, then returned to the Eureka Tower. Jim then ran up the stairs, taking 14 minutes or so, exactly twice the time of the winner. Pretty impressive if you ask me!

Since then I've been doing short runs and the hamstring is responding well (to that, and stretching exercises). I think it's hamstring tendinitis. Anyway, yesterday I raced the Tuggers 5k Parkrun, finishing 53rd out of 161 in a time of 25:32. Average HR was 149, and more interestingly, maximum was 162 as I sprinted to the finish, successfully holding off an older lady. It's easy to get high maximum heart-rates when you're not fit!

Over the last four weeks I ran 122 kilometres (30 and a bit ks per week); the four previous to that, 255. I'm injured, and rapidly losing fitness. I've done something to my left hamstring — I think probably related to the aftermath of the mountain race. I feel like the 23:10 5k, which at the time indicated a return to the 22-somethings (good for me at 56), was a dead-cat-bounce of a run. Now (if I could race) I wouldn't be confident of breaking 25. This injury has come at a bad time as I'm flying to Melbourne on the 16th with my mate Jim to race the 14k City2Sea fun run. I think I could be a spectator — hope it's a warm, sunny day!

I'm susceptible to hamstring niggles/injuries. A search back through my diaries since '04 reveals over 70 mentions of 'left hamstring', so there's something sinister going on there. I think the main cause is asymmetry. Few runners are perfectly symmetrical left to right — run blindfolded on a large flat field and you won't run in a straight line. We use our sight to keep running straight and make automatic adjustments to the stride to do this. Run on a flat sandy beach at low tide and measure your strides — one will be longer than the other, if only slightly. I'm right-handed (legged too — can't high-jump off my left leg) so I have a left hamstring weakness.

I think this hamstring strain is minor in nature. It's responding to rest. In the past I've been able to run through it, or at the most had a week or so off before resuming normal training. I had five days off last week but ran on Thursday and Saturday. Thursday I jogged 3k on the grass track and the hamstring was bearable. On Saturday I raced the Parkrun and the leg felt okay through the first kilometre. I actually ran my fastest first k split (4:43) and was gaining on Jim who ended up running a PB of 23:46. Running up the slight incline onto the bridge my leg started feeling sore and a few hundred metres later it was getting worse so I stopped running. A DNF! Well, after running 1.5k I walked the rest of the course so strictly not a DNF. I've run over 1000 races and had to DNF only five or six times. DNS is definitely preferable to DNF. 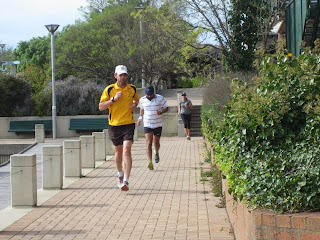 Running to a 23:25 in the Tuggeranong Parkrun on October 5 in my Brooks Racer STs
Posted by Ewen at 1:14 pm 17 comments: