I was looking forward to the Melbourne trip as a social occasion more than anything — a short holiday to one of my favourite cities with the prospect of hanging out with Canberra friends Ruth, Dave, Cathy and Liz. During my jog around 'The Tan' late on Friday afternoon I revised my race goal to 'sub-50', a time I'd be happy with on the hilly Melbourne course. That night we enjoyed a lovely Italian meal at Triim on Hardware Lane. I like Melbourne! At the civilized hour of 9.18 AM on Saturday I joined the girls for a 'shake-out' jog along the Yarra (Dave was out riding his bike in preparation for the Australian Duathlon Championships to be held in Adelaide the following weekend). My legs felt okay, but nothing special. That evening we 'carbed up' at Vons on Hardware Lane.

On Sunday morning (very early for me) we walked the 2k from the city to Race HQ near the MCG. The 10k was starting at 7.30 with the half marathon (which Liz and Ruth were racing) half an hour later. Just prior to the start I bumped into Twitter friend Sal and coach Bill near the river, Sal doing run-throughs and very psyched up! She would run an excellent 41:14 on a course where the hills are worth about 30 seconds. My race went well — once up the short hill after the start I found myself running near a lady with her two young children. Their pace was good so I followed them along St Kilda road and around through the tunnel. The kids started slowing on the gentle (but long) climb beside the Royal Botanic Gardens so I moved ahead and selected other distinctive runners to chase.

I ran by feel (and the effort certainly felt quicker than 5-minute k pace!), but did sneak a look at my Garmin at the 5k mark. 24:53 — I'm sure I can double that — we're almost to the high point on the course! I was enjoying myself! Especially running back towards Flinders Street Station; mostly overtaking runners, or at least keeping up with other conservative starters. Finally I was over the last nasty bridge and 'sprinting' up to the finish arch just outside 'The G'. 49:25 — I'll take that! I've raced the 10k in Melbourne before — in 2008 I ran 46:38 at an average heart-rate of 151 (704 heart-beats per km). This year my AHR was 143, so 707 heart-beats per km. I'm not sure when my next 10k race will be but I'd love to run a time in the 46 to 47-minute range. I think a time like that is possible, even for an old bloke! 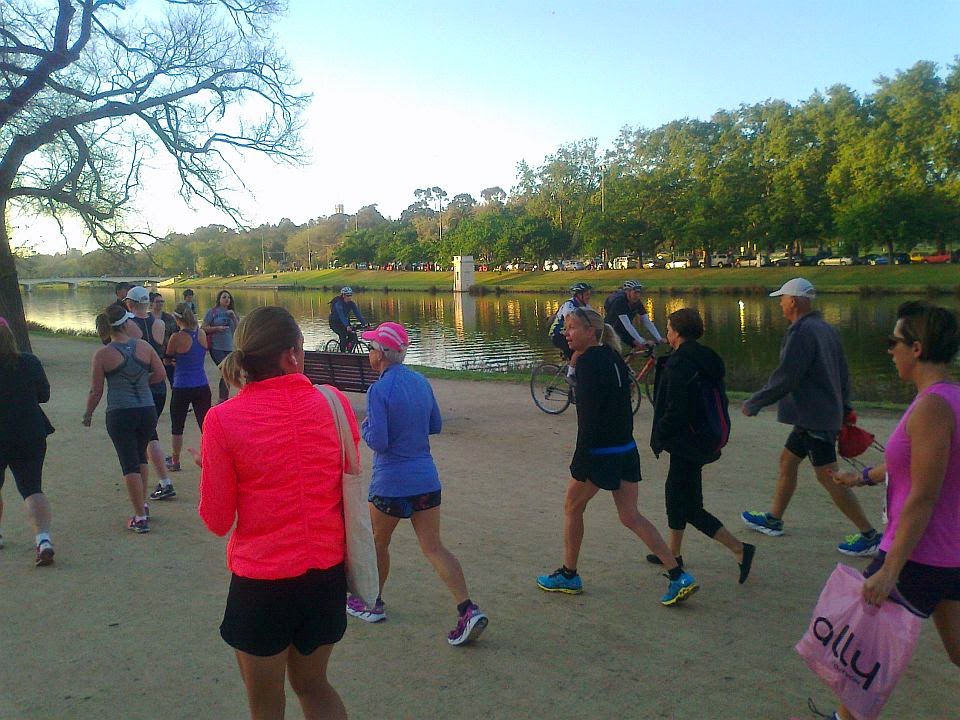 Ruth, Liz, Cathy and Dave walking to the start beside the beautiful Yarra River 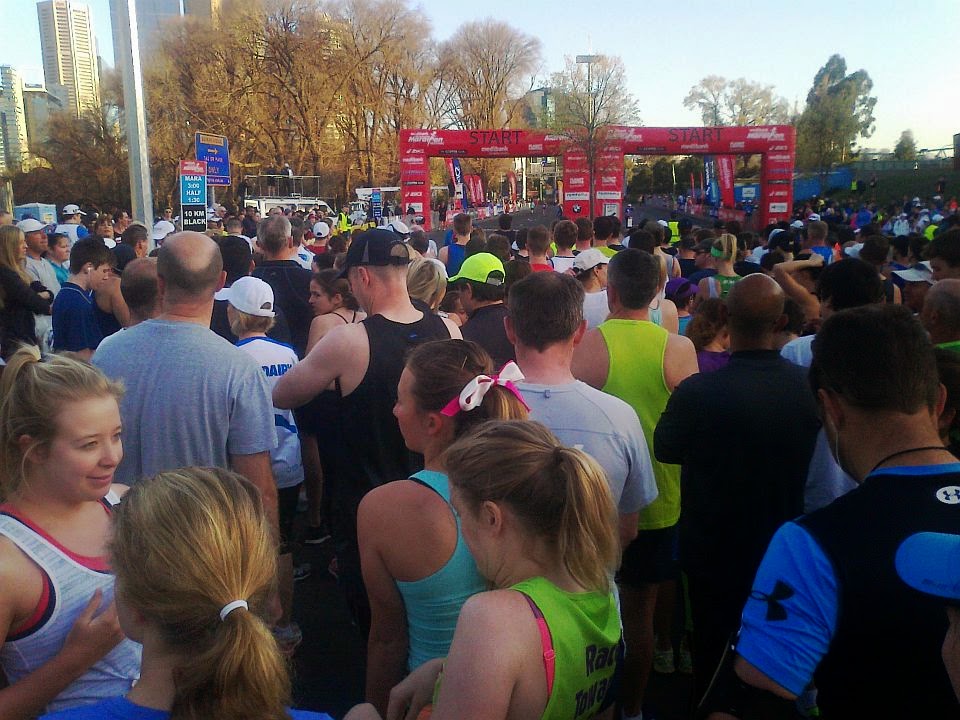 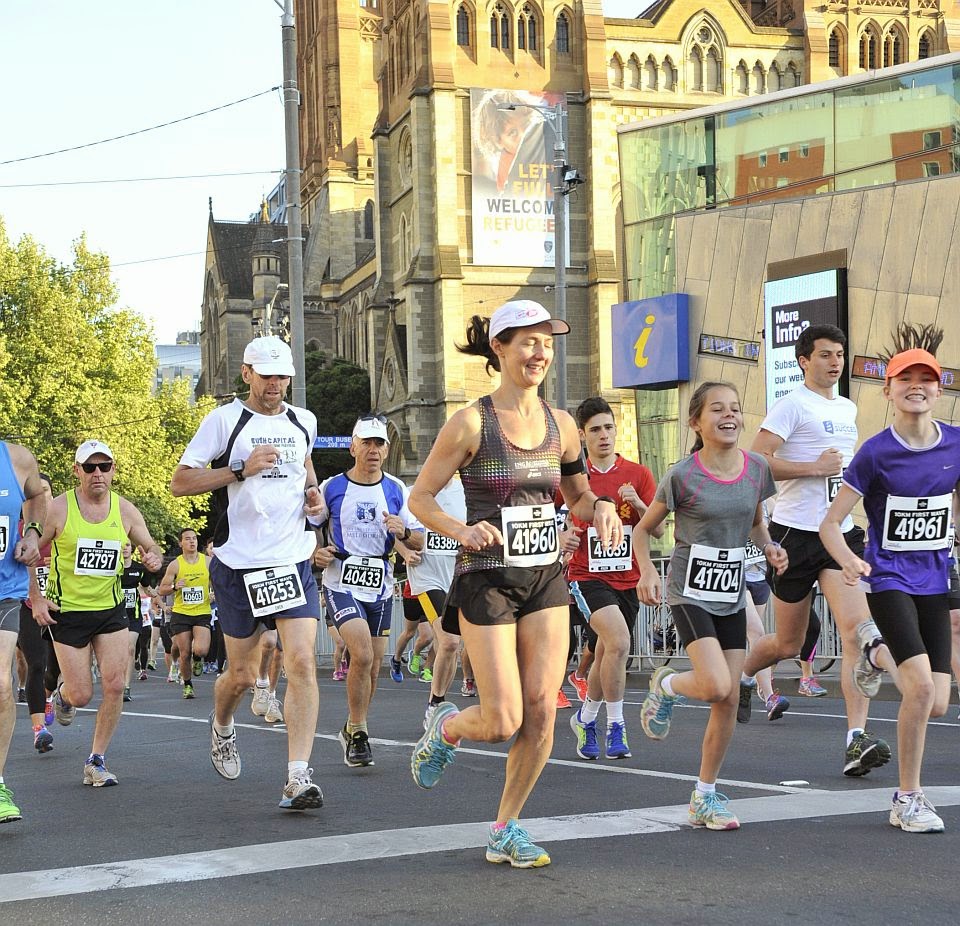 Enjoying a beautiful Melbourne morning!
Posted by Ewen at 4:48 am 15 comments:

On Saturday morning I raced my 44th Parkrun 5k, which happened to be on International Parkrun Day. There were a record 320 finishers at Tuggeranong, no doubt helped along by the beautiful calm morning with a hint of Spring warmth in the air. My pre-race plan was to run hard and see if I could improve my 22:52 Parkrun PB.

I arrived a little late so warmed up with a short jog and 3 strides. Our race director had set up a rather narrow start chute so my usual grid position produced a momentary delay of 5 seconds or so before I was up and running. I was wearing the Hoka Cliftons — the super cushioned and stunningly light (265 grams, size 13) training shoe. The harder Kinvaras may have been faster, but my legs are liking cushioned shoes! After 500 metres I found myself running behind a lady with a dog on a lead — she on one side of the path and the dog on the other. Should I resurrect my steeplechase skills and hurdle the lead? Ah, maybe not! It wasn't long before I was able to get past and settle into a steady (hard) tempo.

Passing the Maccas morning breakfast crowd I looked up ahead and saw my rival Jim taking the sharp left turn that leads under the bridge. Wow, that's quite a lead! As we turned onto the concrete footbridge I could see that Jim had formed a group with two other old blokes, Paul and Graeme, with younger bloke John along for the ride. Their advantage was about 75 metres but I could sense it was slowly reducing. I didn't feel like I was speeding up (which was proved by my post-race splits). Maybe they've started too fast? At the half-way turn I was closer and felt like a catch was inevitable. I hope it happens before the last 100 metres! As we ran off the bridge onto the west side of the lake the small downhill gave me the momentum to overtake John and Graeme then Paul and Jim in quick succession. 1k to go! I ran as hard as I could, fearful of Graeme's final sprint (which he used to defeat me in an earlier Parkrun).

Now I was using young blokes and kids as unofficial pacers, racing along beside the lake and readying myself for the final speed-bump of a hill into the park. Up and over, then a modest (it felt devastating!) sprint to the finish. Stopped the Garmin after the line, pretty pleased to see 22:52 (official time was 22:54, so agonisingly short of a new Parkrun PB). Never mind, I'd had a good race! I think the additional cycling training I've been doing is starting to produce results. I still don't feel 'fast', but I feel strong which is a good place to be. My average heart-rate for the race had been 146, so a pleasingly low 669 heart-beats per kilometre. One kilometre splits were 4:38, 4:34, 4:34, 4:35 and 4:33 (the first closer to 4:32 taking into account the delay at the start). This coming Sunday I'm racing the  Melbourne 10k, looking forward to it as a catch-up-with-friends holiday rather than a race. I hope the weather is typically Melbourne-perfect! 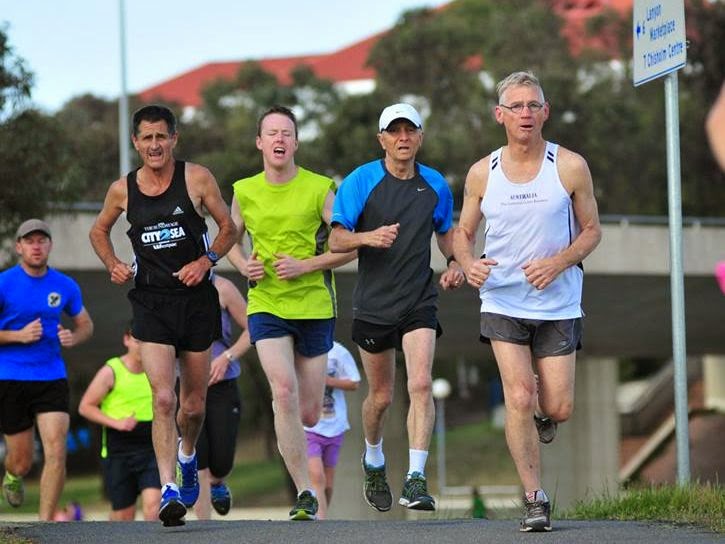 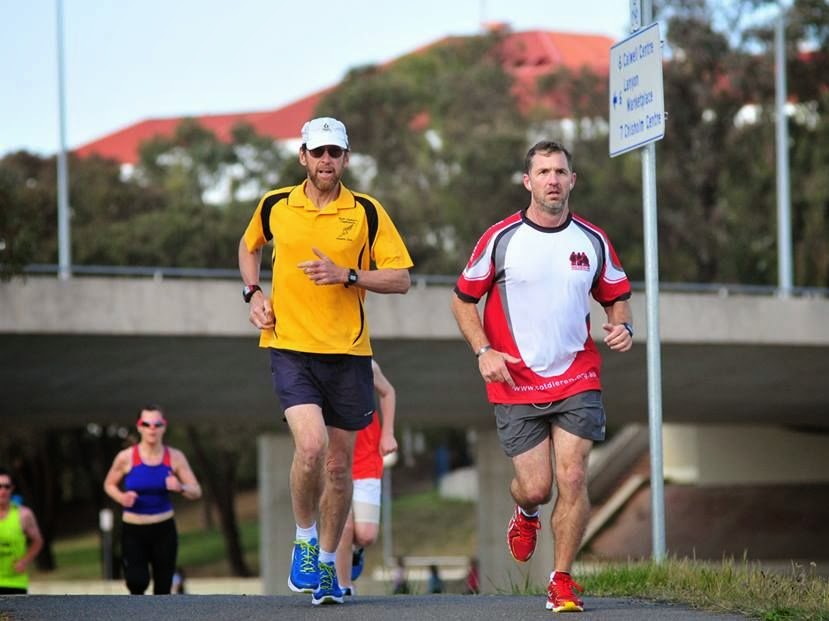 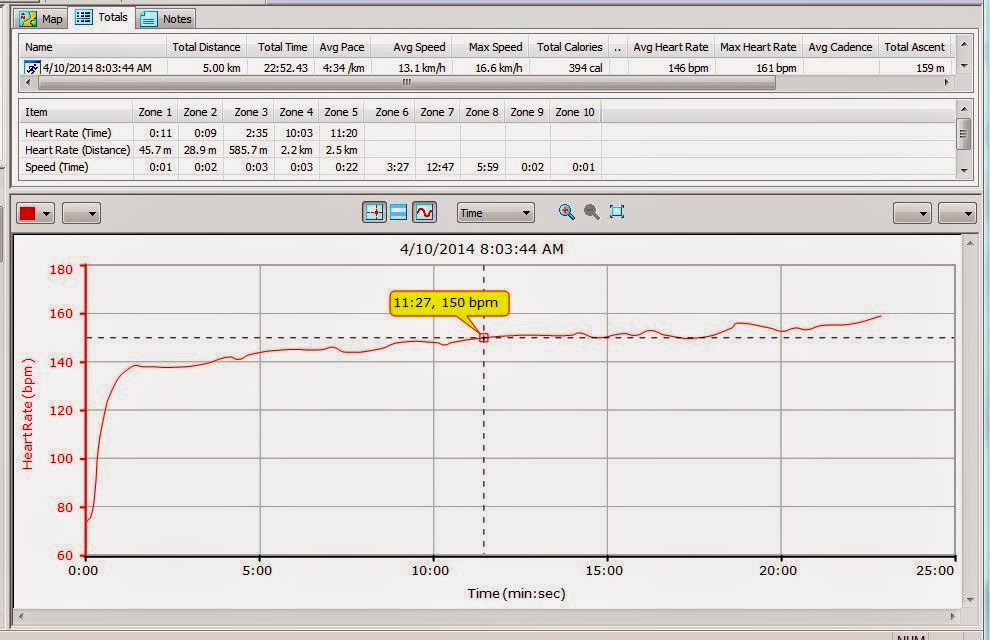