I'm an abject failure when it comes to multi-tasking. This malady is said to be typical of males. I'm unable to chat on the phone, eat breakfast, use a laptop, shuffle the iPod, and apply make-up, whilst driving the Corolla. For 2008 I've chosen a single goal for my running. Having just one task may be more sympathetic to my male brain.

I came up with the One Goal plan after stumbling upon a couple of one goal websites. Alex Vero has the goal of qualifying for the Beijing Olympics. Actor Patrick Clarke wanted to be the second runner over 40 to break 4 minutes for the mile. Patrick fell short, running 4:59.19. Alex has recently been training in Ethiopia, but with a half marathon best of 73:45, is unlikely to run the minimum marathon standard of 2:14 needed for the British Olympic team.

In recent years I've been a contemptible failure at achieving goals, so I wanted one that's at least theoretically possible. My goal for 2008 is to run 3000 metres on the track in eleven minutes and seven seconds. For up-over readers, this is slightly faster than 6-minute-mile pace for 1.864 miles. I used the McMillan and Age-Equivalent calculators to come up with 11:07. Eleven-O-Seven has a nice ring to it, don't you think? For a 50-year-old who's often described using D-word adjectives (decrepit, dismal, doddering), this time is apparently equal to the 9:57 I ran as a youthful 34-year-old.

The plan is to race the rest of this track season (finishing on 13 March). Over autumn and winter I'll do two shorter periods of Hadd-training, following each with speedwork and key races. The second period of racing will commence in October on the track. For a bit of fun this year, I'm also entering Half-Fast's Shave Your 5k Challenge – just so I can look smoother than Speedygeoff.
Posted by Ewen at 4:55 pm 23 comments:

Your encouragement convinced me to race last Thursday night – 25 laps of the AIS track. I was almost a minute slower than December's 10,000 metres, but finished contented. It was hot! My mate down at the BOM said it was 30°C (86°F) with humidity of 34% at 8.30pm, mid-way through the race. Queensland friends would probably call the weather "perfect". I found it hot, and I don't do heat well. For distance running, give me the coolness like one finds at the summit of Grouse Mountain.

For the first 10 laps, I had the company of a patched up CJ. It was a bit of a role reversal from the same event in 2007 when I desperately hung onto CJ, using her to drag me to a "good" 5000 metre time of 23:09. I stopped there while she went on to win the ACT 10,000m Championship. This time CJ was coming back from injury, and lacking race fitness. She dropped back just before 5k, so I ran on alone, being continually lapped by the faster runners. Three laps from the finish, I realised I was catching Roger, so chased hard and overtook him with 600 metres to run, happy, as I rarely finish ahead of him these days. Actually racing those last few laps was fun. So, 13th place (out of 20 starters) in 45:51.74 with 5k splits of 22:41 and 23:10. Kathy, my training partner from Calwell was the female winner in 39:51 - not bad for a 51-year-old mother of two!

Now I'm looking forward to the shorter track races of 800 to 5000 metres, where melting in a pool of salty water is less likely to occur. I'm also working on my running goals for 2008, which I'll reveal in a future post. 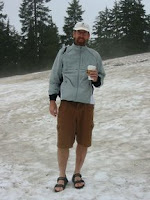 A chill in the air, like I'm feeling here on Grouse Mountain, would have gone down well last Thursday evening.
Posted by Ewen at 9:53 pm 19 comments:

Bad is making me Mad

I walked off the track last Thursday night, confused at what I'd just done. The numbers were bloody awful. 6:06.10. Six! How could a time for a 1500 metre race start with a six? So, in a four-week period I've run my best (Stromlo), and worst (Interclub/Vets 1500m), races of the last five years. Being so bad is making me mad.

The months of Hadd-training hasn't miraculously turned me into a good miler. I guess I shouldn't have expected it to – 99% of that running has been slow. I've done nothing at 1500m goal-pace or faster. Truthfully, I seriously doubt if I have the speed right now to run 800 metres at 1500m goal-pace. Two minutes 56 seconds. I don't think so. At least my kilometre intervals at Stromlo yesterday morning felt easier than last time, although slower. 3:58, 4:03 and 4:04, with 1k jog recoveries in just under 8 minutes. Why can't I race 1.5k at 3:58 pace?

The departure of my speed (not that I had much in the first place), has made me re-think the 10,000 metre Championships next Thursday. Should I run them? I'll wait until the night. If it's hot, and/or I'm tired from work, I think I'll give it a miss. Whatever I decide, I'm putting Hadd-training on hold for the next two months. I have a reasonable base – an average of 91 weekly kilometres (56 miles for up-over readers) for the past 24 weeks. It's time for some speedwork.

As a footnote, I'd like to thank you for taking time out of your day to read my blog, and wish you the best of running in 2008. To put a smile on your face, if you haven't seen it already, take a geek at this Youtube video I saw over at Scott's blog.
Posted by Ewen at 9:45 am 25 comments:

I'm currently in recovery mode after a big weekend down in ol' Sydney town. A highlight of the trip was finally meeting Tokyo-resident blogger Steve Lacey for a couple of Aussie-style training sessions.

I left for the smoke on Saturday after completing an interval session on the sumptuous grass of Stromlo Forest Park. Speedygeoff and Ken set the pace, with myself and Katie battling for third place. 3 x 1000 metres in 3:54, 4:01 and 3:55 with a 1000m recovery jog in about 7:15. I was very happy with that; especially finishing so close to sub-20 5k runner Katie.

I finally met the famous Steve L on arrival at my mate Bruce's place in Artarmon. Steve and a car-load of kids followed us down to Cremorne Point, where I was incredibly impressed by Steve's precision reverse-parking skills. The kids went for a swim in MacCallum Pool while we drove to the start of our run in Sirius Cove. It was an iconic Sydney bush run – a 6km loop around Bradley's Head with occasional stops to admire the stunning harbour views. Nothing like this in down-town Tokyo eh Steve? Afterwards, a refreshing swim in the salt-water pool completed day one.

On Sunday morning, at the respectable hour of 7.30am, Steve ran down to meet me at the Milson's Point stairs to the Harbour Bridge. I've got to admit, his arrival at a huge rate of knots had me worried about what might be in store. Would an old decrepit wombat be able to keep up with a young frisky Japanese-trained ninja? I needn't have worried. Steve was honourably restrained in pace as I took him on a tour of Sydney city running courses, starting with the last 3km of the Sydney Marathon and it's Opera House finish. Then, up past Don Juan's Boy Charlton Pool for the William Street start of the City to Surf. A lap under the famous fig trees of Hyde Park before heading back down Macquarie Street to the Quay, through the rocks and over the coat hanger where I left Steve to run the boring bit back up to Chatswood. For me, the run totalled 15.9km at 5:36/km – very definitely in 'upper aerobic' territory, but great gut-punching stories passed the time and made for a memorable run. Thanks Steve!

On Sunday afternoon the weekend finished me off with another bush run up at Pennant Hills. I ran with Bruce, Ivan, Richard, Anne and Ian. It was a rather hilly run – 9.4km of 'fun', trying to keep up with legends Anne and Ian. I was so tired I had to walk the final hills, but Ian, being a true gentleman, dropped back and accompanied me to the finish. Once there, cheese, biscuits and strawberries were enjoyed by all, along with the coldest beers I've tasted in a long, long time. Thanks Ian!

The bush near Sydney Harbour is a great place for a run!

A bloke with a beard in front of the coat hanger.

A better looking bloke with a beard in front of the coat hanger. 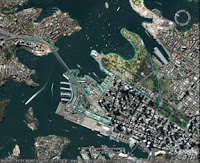 I tried to lose Steve in Sydney, but failed dismally.
Posted by Ewen at 5:53 pm 18 comments: